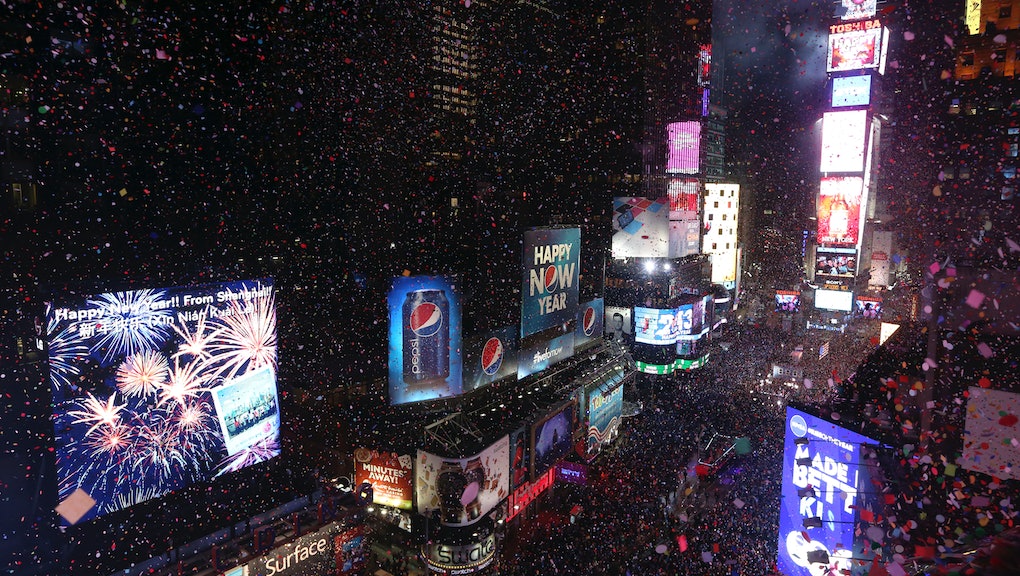 This might come as a shock to you, but New Year’s Eve is kind of a big deal in New York City. Specifically, it’s a really big deal in Times Square. Have you ever heard of it? It’s really cool. They drop this big glass ball at midnight in front of over one million people, and everyone goes bonkers. It’s awesome.

As it turns out, though, the NYE ball drop has not been going on since the dawn of time, like you might think. In fact, it’s only been going on for a little bit more than a century. But today, it’s not just an American institution – it’s a global experience.

Am I the only one who didn’t know Times Square is named after the New York Times? Well, it is. And in 1904, the newspaper opened its headquarters in the newly renamed Times Square, and the city threw a huge party on New Year's Eve to celebrate the year (1904 also saw the city's first subway line open). And it was quite the blowout. From the official Times Square website:

"An all-day street festival culminated in a fireworks display set off from the base of [Times tower], and at midnight the joyful sound of cheering, rattles and noisemakers from the over 200,000 attendees could be heard, it was said … 30 miles north along the Hudson River."

Fireworks were used to celebrate for the next two years until the city banned them, probably because they realized shooting off fireworks isn’t a great idea in a city full of skyscrapers. So to ring in 1908, NYE celebrators turned to a giant metal and wooden ball. That's right. The Times Square ball used to be made, partly, of wood.

What’s the ball made of now?

We're talking about a 12-feet diameter and a total weight of 11,875 pounds. I mean, if you're going to celebrate the end of the year by dropping a ball, it might as well be a 12,000 pound ball made of glass, right?

Ringing in the new year is as big of a deal as ever in Times Square. Over one million people camp out to get a glimpse of the ball drop in person – and more than one billion watch on television worldwide. And this year, Supreme Court Justice Sonia Sotomayor will trigger the drop.

Over a century old, the ball drop doesn't look a day over 99. And it even has a Twitter account, because this is the world in 2013: