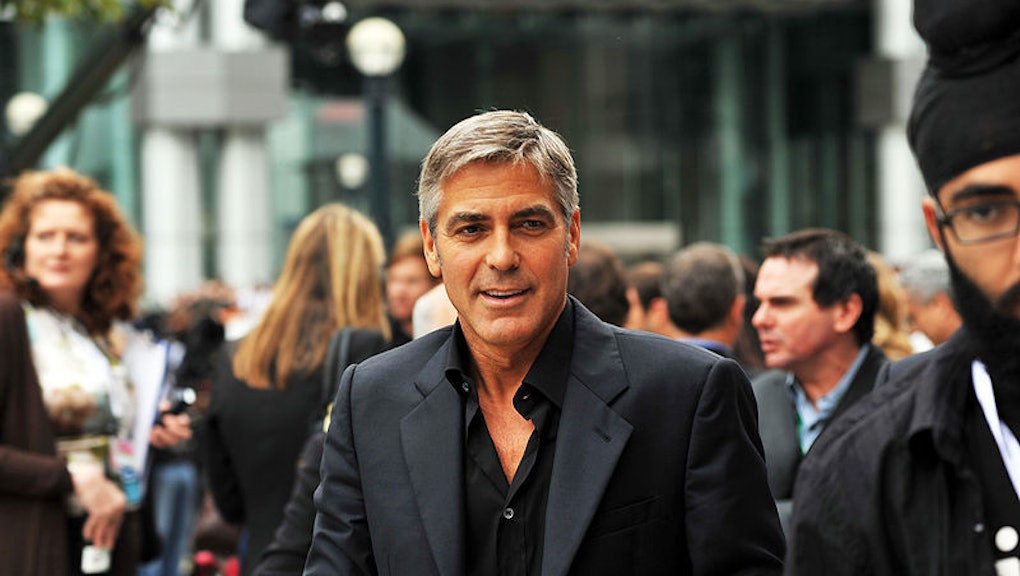 If you forgot that George Clooney's résumé included political activism, last week's uptick in violence in South Sudan served as your reminder. Clooney used his celebrity to call attention to the problems there in a co-written article in the Daily Beast.

But Clooney's activism didn't start there. In fact, his outspoken political perspective dates back to 2003, when Clooney made a crack about gun enthusiast Charlton Heston, thus revealing Clooney's own feelings about the hot button issue of gun control.

Here's a brief timeline of the two-time Sexiest Man Alive's career as a political animal:

Clooney spent 10 days in Chad and Sudan with his father, making the TV special, "A Journey to Darfur," which looks at Darfur's refugees and advocates for action. Shortly thereafter, Clooney spoke at a Save Darfur rally in Washington, D.C.

The Gravity star and Nobel Prize winner Elie Wiesel spoke to the UN Security Council, asking the UN to find a solution to the conflict in Darfur.

Along with fellow actor and activist Don Cheadle, as well as two Olympic medalists, Clooney visited China and Egypt to ask both governments to pressure Sudan's government.

Clooney sent an open letter to German Chancellor Angela Merkel, asking the European Union to take "decisive action" in Darfur. This same year, Clooney narrated and was co-executive producer of the documentary Sand and Sorrow.

Clooney appeared in the documentary film Darfur Now, a call to action to help end the crisis in Darfur.

Clooney and Cheadle received the Summit Peace Award from the Nobel Peace Prize Laureates in Rome.

The UN announced Clooney's appointment as a messenger of peaceMessenger of Peace.

Clooney organized a telethon that collected donations for victims of the 2010 Haiti earthquake.

Clooney, along withWith the help of activist JonJohn Prendergast, the actor initiated the Satellite Sentinel Project (SSP), which aims to monitor armed activity for signs of renewed civil war between Sudan and South Sudan. They also detect and deter mass atrocities along the border.

Clooney and John Prendergast co-wrote an op-ed in the Washington Post  called "Dancing with a dictator in Sudan."

Clooney starred withWorking alongside actors Martin Sheen and Brad Pitt, Clooney starred in a performance of Dustin Lance Black's play, 8, which is a reenactment of the federal trial that overturned California's ban on same-sex marriage. Clooney played attorney David Boies, and tTTTThe production raised money for the American Foundation for Equal Rights. In tTIn Tthe same month, Clooney was arrested for civil disobedience during a protest outside the Sudanese Embassy in Washington, D.C.

Clooney took an auction winner out to lunch to benefit the Gay, Lesbian and Straight Education Network (GLSEN).

George Clooney sent a video message of support to Ukraine's protesters earlier this month. In the video, he condemned the violent crackdown on protesters, as well as the ongoing detention of jailed former Prime Minister Yulia Tymoshenko.