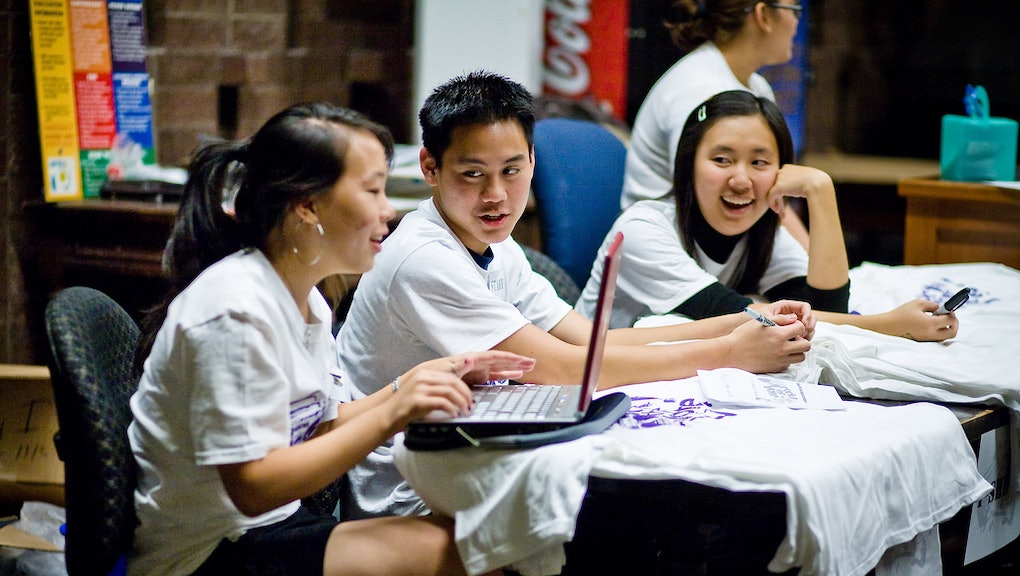 It's Not Easy Being Asian-American

Last week, in a piece for Asian Fortune News, advocates Sharon Choi, Francine Gorres and Tina Ngo argued that many young Asian-Americans constantly struggle with their bi-cultural identities, expected to adhere to multiple sets of norms, none of which quite fit.

"Giving our young people opportunities to share their cultural backgrounds and learn about the experiences and traditions of others is important to youth being able to shape and understand their unique identities," they wrote.

The issue Choi et al raise is an important one, particularly for many first or second-generation Asian-American millennials who feel they have to live up to two different sets of expectations. On the one hand, we're encouraged to embrace American culture and shed ties to our Asian heritage. On the other hand, we're expected to maintain our ethnic identity and keep our parents' traditions alive. Failure to live up to either set of expectations can sometimes lead to fear of rejection or ostracism — even an identity crisis of sorts.

Image via Mixing Up blog.

For many Asian-Americans, the pressure to assimilate is overwhelming. As a whole, we have been treated as second-class citizens. As Loyola Marymount University's Nadia Y. Kim argued in her 2007 research, most people tend to conflate Asians and Asian-Americans, painting the former as "the enemy."

"No group has been excluded from the country because of their 'race' to the extent that Asian Americans have been," claimed Kim.

Because of this prejudice, some Asian-Americans have attempted to bask in the privilege of whiteness (a racial descriptor that many equate to being "American") in order  to appear less foreign, according to the Asian American Law Journal's Suzanne A. Kim. This can include casually denying one's heritage in front of white peers or, in writer Jenny An's case, being romantically involved with white men or women.

"I date white men because it feels like I'm not ostracizing myself into an Asian ghetto and antiquated ideas of Asian unity," she acknowledged in an article for xoJane last year.

Growing up in a predominantly Jewish neighborhood with a small Asian population, I too sometimes felt the need to remove myself from my Chineseness. I didn't feel comfortable sharing my family's culture with my friends because I knew they wouldn't understand it. Oftentimes, I would play down my heritage by hiding my middle name or occasionally poking fun at those who spoke with heavy Chinese accents. At the time, it felt like a necessary way for me to fit in.

My experience is nothing out of the ordinary for young Asian-Americans who must constantly weigh their parents' expectations against those of their peers.

According to psychotherapist Dr. Dorothy Moon, many parents want their children to be strongly rooted in their Asian heritage, and fear that they may go astray. She explains, "Parents of bicultural children are often concerned that their children are becoming very different from them, and tend to either blame themselves, their children, or the dominant culture for their children's problematic behaviors."

In an effort to keep their children close, some parents, like mine, have urged them to take part in cultural activities which promote identifying with Asianness.

When I was young, my parents sent me to Chinese school. They hoped that I would be somewhat fluent in speaking Cantonese and writing traditional Chinese by the time I graduated from the ninth grade. My father, who immigrated to New York in the early 1980s, pushed me to speak Cantonese to him, even though he was fluent in English and had received his bachelor's degree at Baruch College. He, like many other immigrant Asian parents, wanted me to keep my heritage. He made sure I did by refusing to speak English at home, despite the fact that I rarely had the opportunity to speak Cantonese outside it.

Building a bicultural identity has been a balancing act for me, as it has been for many Asian-American millennials. Some of us identify more strongly with our Asian side when we're around our parents and relatives but stick to our American side around non-Asian peers, wanting to feel comfortable and accepted in both communities.

"When I was younger, I was very shy and I had a hard time communicating with people," said my friend Kohei Hamano. "Japanese was my first language since that's what my parents were speaking. I was also embarrassed to bring Japanese lunches that people would not know anything about."

Young Asian-Americans like me and Kohei can feel like outsiders within our own communities, no matter where we were born, or where we grew up. Being bicultural may make us unique, but it can be as much a curse as a blessing.