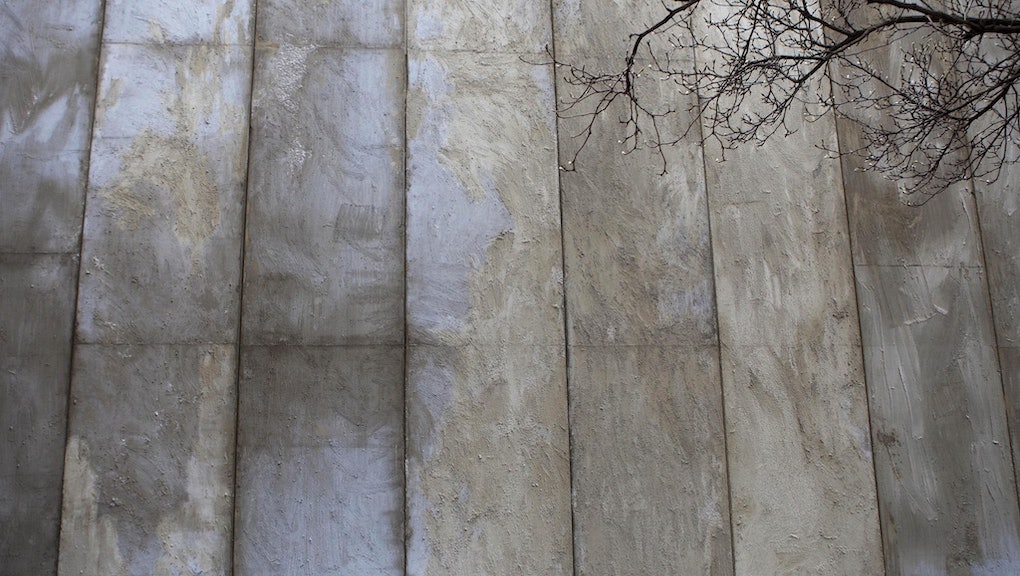 Why There's Suddenly a Wall Surrounding This Historic London Church

St. James's Church, Piccadilly is over 300 years old. Designed in the 1600s by one of Britain's greatest architects, Sir Christopher Wren, it's a photogenic, peaceful pocket in one of London's busiest and most famous spots. William Blake was baptised at St. James's, Robert Graves was married there, and today it remains a living monument to London's history, culture, and present reality.

This New Year, however, the centuries-old facade of the church will be rendered invisible by a wall. Eight meters high and a dull featureless gray, the new wall completely obscures the red bricks of St. James's, blocking off a beautiful landmark and a piece of London's cultural life. What's more, the eyesore has been put up completely intentionally. And that intention is a fairly good one.

The installation is an exact replica of another, much more significant wall. Today in Bethlehem, Palestinians go about their lives in the shadow of Israel's "Separation Barrier": eight meters tall, faceless, and uncompromising and topped with razor wire, it cuts through neighborhoods and farmland, splitting Bethlehem from nearby Jerusalem and curbing the movement of its inhabitants. From many homes and on the roads on the edge of town, it's all you can see.

The wall at St. James's has been constructed to draw attention to this continuing physical split in Palestine. It's part of the "Bethlehem Unwrapped" festival, a series of events taking place at St. James's to coincide with the 12 days of Christmas. According to festival organizer Justin Butcher, it's about "unwrapping the tradition victorian sentimental images of Christmas, and showing that this is today what Bethlehem looks like — an eight meter high concrete separation wall surrounding it."

Of course, Bethelehem is not the only place to be cut off by the barrier. When completed, it will stretch some 709 kilometres around the West Bank, a length made up of electrical fences, barbed wire, trenches and, of course, the concrete walls reproduced in London this week. The stated aim of the wall was preventing terror attacks in Israel by controlling the passage of Palestinians from the West Bank. But rather than following the Green Line that delineates Israel's armistice borders, 85% of the wall currently stands in the West Bank and when it's completed, nearly 10% of the territory will be on the Israeli side of the wall, inaccessible for many Palestinians.

By concealing St. James's Church, the organizers of Bethlehem Unwrapped hope to expose at least some parts of this reality. But the project, they say, is also about highlighting hopefulness.

"I visited Bethlehem for the first time last year with a group of artists from the UK and we came away profoundly inspired by the extraordinary peace-makers we met on both sides of the divide," said Butcher. "Beneath the radar of most international media, an astonishing hope is springing up in many places, even in the bleak shadow of the wall."

If you're in London, you can visit the Wall — and maybe even scrawl on some graffiti — until January 5th. In Bethlehem, unfortunately, the reality of the barrier isn't so temporary.