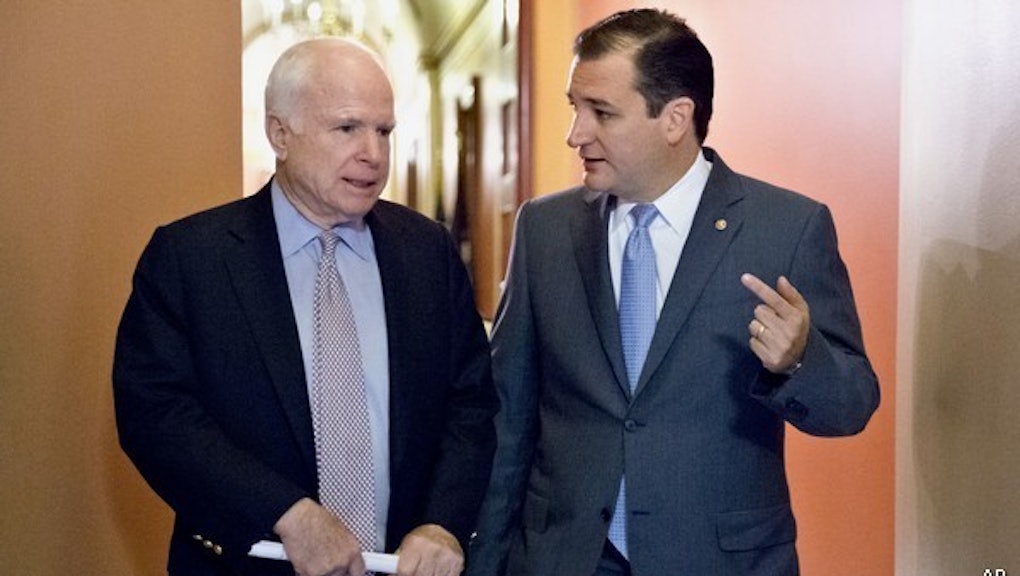 There's a storm a brewin'. Though October's two-week long government shutdown is a faint memory for most, the GOP will continue to feel its reverberations carrying into 2014 as the party continues to splinter. The shutdown (catalyzed by an unwavering faction of the GOP who believes the Affordable Care Act's detriment outweighs that of two weeks with out Uncle Sam) sundered the Republican Party into Tea Party-backed activists and run-of-the-mill Republicans.

The government shutdown served as a wakeup call to establishment GOP groups like the U.S. Chamber of Commerce (and GOP leadership alike), which watched aghast as Tea Party lawmakers refused to compromise and almost welcomed the shutdown. Now, the USCC and other groups plan on pouring money into the campaign war chests of establishment GOP pols to fend off Tea Party primary opponents.

Senator Ted Cruz (R-Texas) continues to lead the libertarian-leaning charge with the sole purpose of repealing Obamacare. Anonymous members of Congress fed the media snippets of GOP talks throughout the shutdown claiming Cruz's "fauxllibuster," was, however valiant, utterly foolhardy and self-motivated. On the flip side, groups such as the Senate Conservatives Fund (purveyor of RetireMitch.com), stand by the senator's cracks at the law.

As for the business groups supporting Republicans whom at least publicly denounce the shutdown maintaining, "No Fools On Our Ticket," we should be encouraged to take a step back to think, what exactly constitutes a fool? Are those we consider to be fools the same people the USCC does? That all depends on your stance on Obamacare. As someone who believes the law to be inherently unconstitutional, I support congressional efforts to repeal it. Surely, those directly effected by government shutdown and/or on governmental payroll beg to differ.

So, what motivates "conservative" business groups to stand behind those who apparently do not stand for sincerely conservative principles? The government shutdown sparked one of the most pervasive blame games Congress has waged in the past decade. Twitter exploded with hashtags pinning the shutdown on Harry Reid or Ted Cruz. Who wants to be associated with that?

Given the country's current political climate, the future of the GOP remains uncertain. Conservative pundits declare 2014 the year of the GOP so long as they allow Obamacare to continue wreaking havoc on the health insurance market. But with six million people reported to have lost coverage, can GOP lawmakers really turn a blind eye on their constituents just to prove a political point?