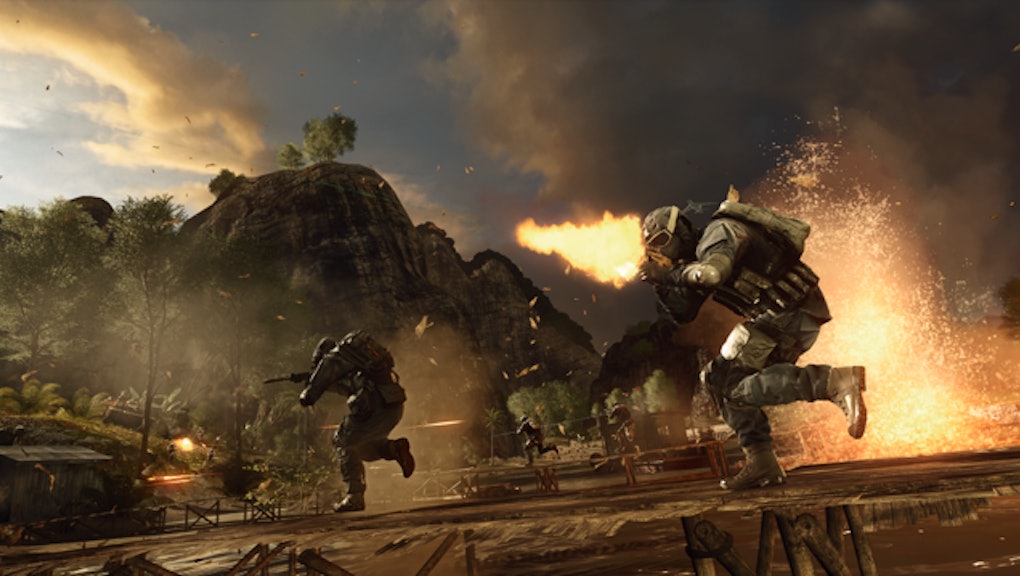 When the video game publishing giant Electronic Arts released a China-centric expansion to their military shooting simulation Battlefield 4, they likely expected controversy — and they got it. The Chinese government allegedly issued a ban on the game, claiming it "endangers national security."

Subtitled "China Rising," the trailer for Battlefield 4 is narrated by a Chinese general, who claims that for years his people have built "their toys, their shoes, even their flags," while "enduring their condescension and biding our time." He then announces, "Finally the moment has come," for "now [America] will know our greatness." With the rogue general launching an attack on American forces, the fight is taken to four new levels on the Chinese homeland, described as "exotic."

It's understandable that such an introduction would ruffle a few feathers in the nation that is being both overtaken and portrayed as a warmonger. In response, the game was allegedly banned for "demonizing the image of China in a new form of cultural aggression," while also "discrediting China's image abroad and distorting the truth in an effort to mislead young people."

Numerous media outlets have since removed the report, and some online commenters who claim to be Chinese have noted that news of the ban is false. It certainly would be difficult to ban something that hasn't been officially released in the country. That being said, the ban isn't unimaginable; games have been banned before, and Battlefield 4 either implies treachery in the Chinese military, or that China has an interest in some day conquering America.

More alarming than the supposed ban, however, is the fact that China, a country on the rise and inextricably linked with the U.S., is possibly feeling a sense of "cultural aggression" because of repeated jingoistic portrayals in console gaming — an industry largely dominated by prominent American and Japanese studios, with little Chinese involvement.

Older games like Hearts of Iron and IGI 2 were both banned in China for their negative depiction of the country, but recent games haven't been much better. The portrayal of China in gaming continues to disappoint, propagating feelings that hardly suit any nation, let alone one so inextricably tied to us.

Sleeping Dogs, developed by the Canadian studio United Front Games and published by a branch of the Japanese giant Square Enix, depicts Hong Kong as a hotbed of criminal activity, where even the most noble police officer spends his time burning off criminals' faces. While that is the premise behind much of Hong Kong martial arts cinema, they at least make a distinction between their common citizens and criminals; Sleeping Dogs does not.

Splinter Cell portrays a Chinese general and former revolutionary as a cowardly drunk who shoots his own men; this hardly makes for good viewing in Chinese minds.

And, perhaps most emphatically, the mega-blockbuster hit Call of Duty: Black Ops II depicts the People's Republic of China as its primary antagonist. That's right: The enemy is not a group of Chinese thugs or even a rogue government member, but rather the republic itself, which attempts to goad Russia into war with the U.S., attacks the Indian border, and tries to kill a pro-U.S. Afghan president.

Japanese-developed games offer similarly offensive portrayals. The legendary Metal Gear depicts a nuclear launch against China, while the 2008 American hit Fallout III showcases a world destroyed by a "Sino-American War" in the year 2066. And China isn't alone in being villainized: Russia is still a popular video game villain, as are the Middle East and Asia Pacific.

All these portrayals effectively create an "us versus them" mentality, propagating an image of China as something to be wary of. And while China is certainly a very different country with very different values, that doesn't mean that it should exist so frequently as a villain. China's view of America in video games isn't much better, but bigotry should never be reciprocated. Americans were outraged when a game allowed players to assume to the role of identified enemy combatants, so it should at least be understandable why the Chinese may not be too happy with these images either.