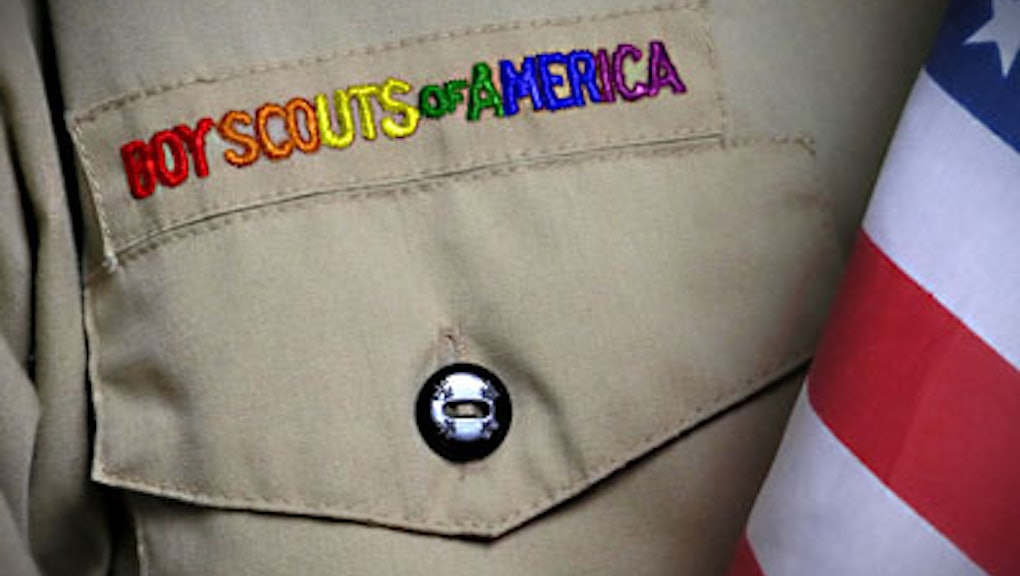 Boy Scouts Of America Will Allow Gay Scouts in 2014

The news: Pascal Tessier, a Boy Scout and 17-year-old high school senior, said he had in the past been denied his Eagle Scout Award — the highest Boy Scouts of America (BSA) accolade — because he is gay.

But he is now slated to make history, becoming not only an Eagle Scout on January 15, but also the first openly gay Eagle Scout as the BSA lifts its ban on gay scouts.

On Friday, the BSA issued a statement saying, “While perspectives and opinions vary significantly, parents, adults in the scouting community, and teens alike tend to agree that youth should not be denied the benefits of scouting.

“For this reason, the executive committee, on behalf of the national executive board, wrote a resolution for consideration that would remove the restriction denying membership to youth on the basis of sexual orientation alone and would maintain the current membership policy for all adult leaders of the Boy Scouts of America.”

While a major step in ending discrimination, many in the gay rights community remain upset that the BSA still does not allow gay leaders. And unsurprisingly, the Boy Scouts are getting slammed by conservative groups like the Family Research Council that called the policy shift “a casualty of moral compromise.”

The background: Several corporations and celebrities have dropped ties (and with it financial support) with the organization over its anti-gay scout policy. In March, singer Carly Rae Jepsen and the band Train both withdrew from performing at this year’s Boy Scouts National Jamboree in objection to the Boy Scout’s policy. Later that month, Chipotle dropped its sponsorship of a BSA event, “Scout-O-Rama,” in Utah. In December, Lockheed Martin Corp, a top U.S. defense contractor, stopped donating funds to the BSA. Other companies like Intel, UPS, Merck, Major League Soccer, and many United Way chapters have postponed their donations.

Even within the organization, attitudes toward gays have loosened. In February, the BSA issued a survey of 200,000 members, parents, youth, donors and strategic partners on their views of homosexuality, concludingthat parents in three of four BSA regions opposed the current policy excluding openly homosexual members.

The takeaway: The BSA boasts 2.6 million youth and 1 million adult volunteers — and while it’s a major step to allow openly gay members, the ban on homosexual adults remains a point of contention for gay rights advocates.

Rich Ferraro, vice president of communications at GLAAD, said in a statement, “By refusing to consider an end to its ban on gay and lesbian parents, the Boy Scouts have missed an opportunity to exercise leadership and usher the organization back to relevancy.

“We’re living in a culture where, until every young person’s family is treated equally and able to contribute, the Boy Scouts will continue to see a decline in both membership and donations.”

Another group, Scouts for Equality, remains committed to ending LGBT discrimination in all facets of the organization. Its founder, Zach Wahls who has two lesbian mothers who were banned from participating, said “Opening membership to gay youth is a historic first step toward full equality in the BSA, but we’re not there yet.”