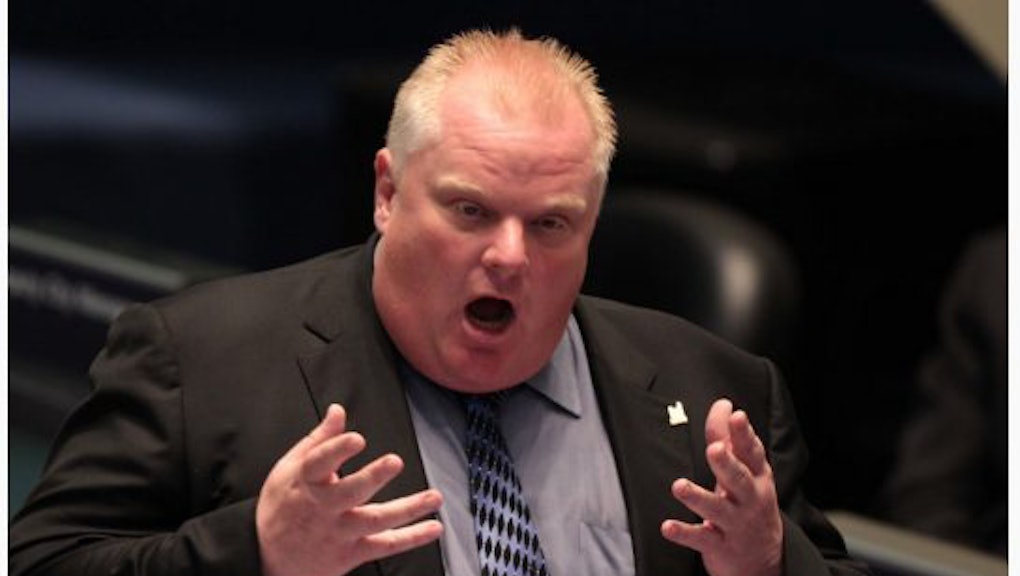 13 Political Awards You Didn't Hear About

The Good, The Bad, and The Ugly. Last year offered everything from Carlos Danger to botched rollouts, stunning poll reversals, and stories likely to define America's political landscape in the coming years.

What New Jersey Governor Chris Christie's re-election bid accomplished in 2013 is a sight to behold, that a GOPer could win a blue state is worthy of admiration, but Christie's landslide is something for each party to look at in the future. He's now leading or in a dead heat with Hillary Clinton in many of those early 2016 polls we like to complain about but can't stop writing about.

For noted tweeter and former Rep. Anthony Weiner, up seemed to be the only direction in his bid to re-enter public life and win New York City's mayorship. After all, he'd only been forced out of office and publicly shamed for those tweets heard round the world.

Yet, Weiner made going beyond rock bottom look like shooting fish in a barrel, running a sideshow of a campaign and earning a well-deserved dismal finish in the Democratic primary.

Why hasn't she been fired yet? Health and Human Services Secretary Kathleen Sebelius's 2013 saw her in the eye of the Healthcare.gov storm, and to say she didn't weather it well would be generous. Adding insult to injury, the site again crashed as she watched a Florida couple's attempt at registering.

4. Most Likely To Get Fired By the Obama Administration: No One

Last year definitely made us question how in the world one could actually go about getting fired by the Obama administration. His own former press secretary, Robert Gibbs, said it's "inexplicable" if someone doesn't get the axe over Healthcare.gov.

Other freshmen may get the 2016 treatment, but Georgia Rep. Doug Collins deserves a stogie for his first year on the Hill. He passed legislation, was dubbed a GOP “anarchist” by New York Magazine, raised $100,000 in a single month, and even went toe to toe with Al Sharpton for good measure. That’s the kind of year you want when you represent one of the most conservative districts in the country.

At best, the launch of Alison Lundergan Grimes's bid to unseat Mitch McConnell in Kentucky was a comedy of errors. Thirty minutes late and without a campaign logo, the only thing more awkward than the brief remarks was her scurrying offstage and away from questions immediately afterward.

From steam-rolling a city councilwoman to a engaging in a nonstop diatribe of inappropriate behaviour on live television, Rob Ford gave us a year of political shenanigans that (hopefully) won't be matched anytime soon. If only Chris Farley were alive to play him in a movie.

Last year's other duck controversy came at the eleventh hour out of New Hampshire, where state Rep. David Campbell, a Democrat, found himself accused of running down ducks in a spiffy BMW.

He fled the scene, reportedly saying at the time that "the ducks should have moved."

Vice President Joe Biden took the time to brandish his Second Amendment chops, urging Americans to "just fire the shotgun through the door"' when it comes to warding off intruders.

The thing is, that's illegal in his home state of Delaware. And, among others. And a Washington state man apparently took the advice to heart, when he pled not guilty to charges over doing sofiring warning shots to scare away what were believed to be car thieves. "I did what Joe Biden told me to do," he quipped.

"The choice is right." Bob Barker's has normally reserved his political comments to pet population control, but in 2013 he went on the air to back Florida Republican David Jolly’s bid for Congress. I'd say this teamup went a little better than it did with Happy Gilmore.

Though Ken Cuccinelli came up short in his bid for the Virginia Governor's Mansion, a silver lining for GOPers is his six-point victory with millennials in the state. Christie also racked up strong numbers. Meanwhile, President Obama's approval numbers with the bloc have soured, falling more in line with the national average than with the landslide support he got in 2008 and 2012.

This year is an opportunity for Republicans to solidify long-term gains. Pajama Boy could be a game-changer, though.

A story we're likely to see a lot more of in 2014 is the contrast in policy and results by states solely controlled by Republicans and Democrats. One party currently occupiesThere is a partisan majority in both governorship and legislative majoritiesure in 37 out of 50 states, making for a real contrast of ideology. As a conservative, I'm inclined to say it's no wonder many are looking to theose governors (23 of the 37 are GOP-held) for the future.

13. Most Likely to Eat Crow: Democrats

Last year gave us a year of quotes that Democrats found themselves eating when all was said and done. Repeated boasts of the Affordable Care Act as a godsend were met with a launch that saw insurance cancellations, premium spikes, site crashes, and downright confusion. Whether or not the "glitches" are fixed remain to be seen, but the year that was left eggs on many Dems' faces.