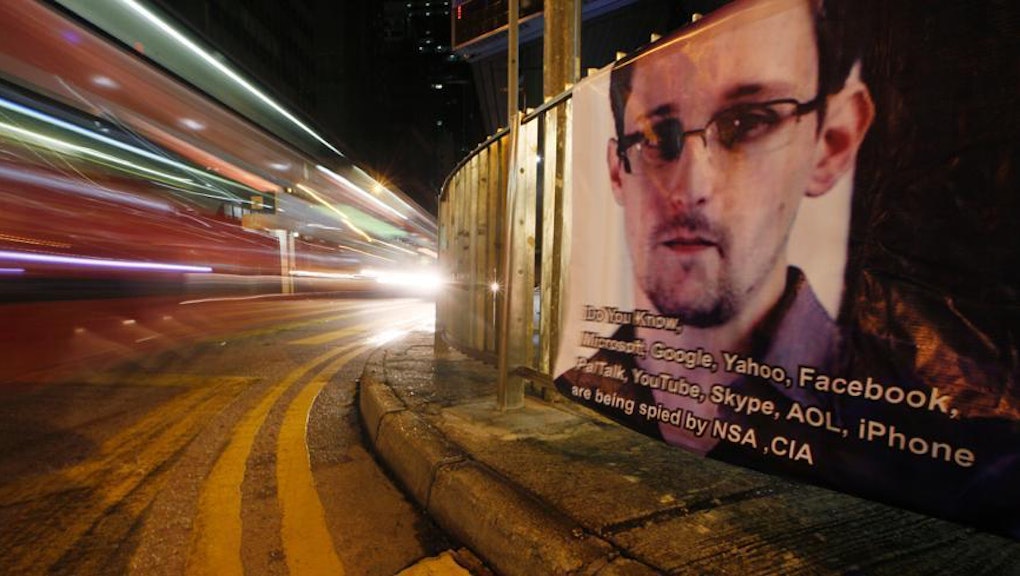 The news: The New York Times kicked off 2014 with an article from its editorial board calling for clemency for Edward Snowden, and urging the federal government to allow Snowden to return to the United States:

"It is time for the United States to offer Mr. Snowden a plea bargain or some form of clemency that would allow him to return home, face at least substantially reduced punishment in light of his role as whistle-blower, and have the hope of a life advocating for greater privacy and stronger oversight of the runaway intelligence community."

The Times cites the "enormous value of the information [Snowden] has revealed" in its argument that Snowden has "done his country a great service" and "deserves better than a life of permanent exile, fear and flight."

Sure, this isn't the first time that a news organization has called for the U.S. government to show leniency with regard to Snowden — The Guardian even did the same on Jan. 1 — but it seems to mean more coming from the Times. It seems, really, that the defense of Snowden has officially hit the mainstream.

So is the Times right? Well, yes, of course. If only because, as it stands now, nothing is being accomplished — Snowden has asylum in Russia, his leaks are already out there, and the U.S. government can continue to try to ignore the issue. Things remain sort of in limbo, or at least that's the way it feels. Bringing Snowden home would bring the issue to a boil; the U.S. government would have to face it head on.

Snowden was right when he told The Washington Post that his "mission's already accomplished." The federal government has clearly already lost, simply because we're talking about it. Threatening Snowden with criminal charges carrying years and years in prison isn't working; he continues to release new documents every so often and doesn't seem to be ready to stop any time soon. The cat, as they say, is out of the bag. Putting Snowden in jail for the rest of his life isn't going to undo what he's already done. The conversation has begun, and it's cowardly for the federal government to try and skirt around the issue. By allowing Snowden to return home and granting him clemency, the president can show a commitment to addressing the problems within the intelligence community.

But wait — doesn't Snowden deserve punishment? He did, arguably, break the law. Well, the Times has it right on this front, too: "The shrill brigade of his critics say Mr. Snowden has done profound damage to intelligence operations of the United States, but none has presented the slightest proof that his disclosures really hurt the nation's security."

There doesn't seem to be any logic to the argument that Snowden deserves life in prison. What would sending him to jail accomplish, really? Sending a message? Deterring other whistle-blowers from following in his footsteps? That's a pointless exercise in bullying and intimidation. Anyone following Snowden's example isn't going to be prevented by the potential punishment.

The continued "vilification" of Snowden, as the Times calls it, is futile. What's done is done. The federal government already has to deal with the conversation Snowden ignited about the intelligence community. Allowing Snowden to return home under promises of clemency would force the government to address this directly — something U.S. citizens deserve.

Kudos to the Times for throwing its authority behind the fight for clemency.