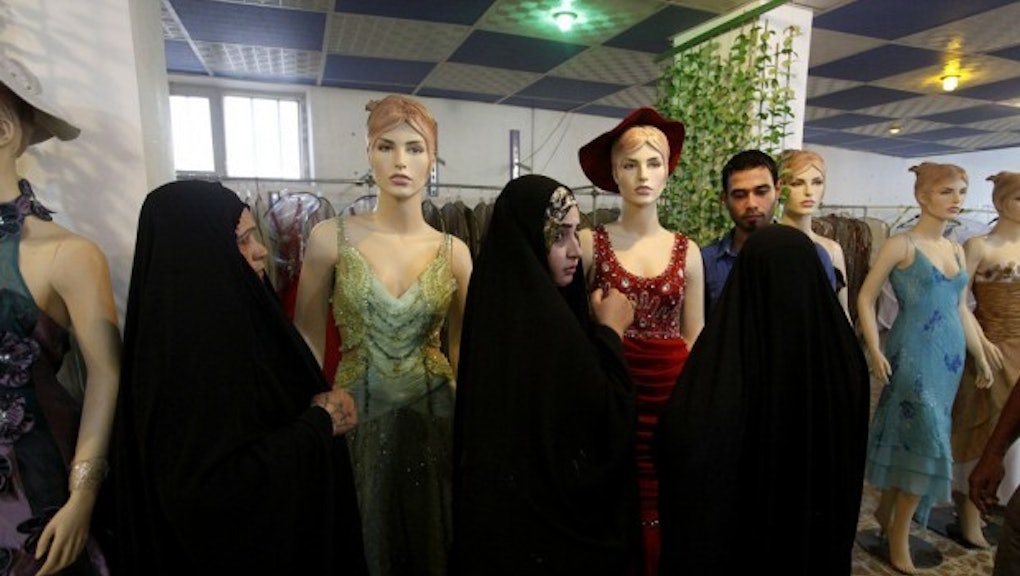 Al-Qaeda in Iraq Makes Sure Locals Don't Dress Too Western

Al-Qaeda in Iraq keeps meticulous (even anal-retentive) records of its expenses ranging from suicide bombs to cakes, but according to liberated residents of al-Jura village in al-Tharthar sub-district south of Samarra, Iraq, they also closely regulate such minutiae as clothing ... on the pain of severe punishment.

According to al-Jura mukhtar (village or neighborhood leader) Abdul Raheem al-Hassany, for over a year, residents of the village lived under the fear that Al-Qaeda militants hiding amongst them would whip them for offenses as minor as wearing a shirt with English words on it or Western-style clothes.

"Al-Qaeda members would disappear during the day, and appear at night to terrorize residents by giving out printed statements containing death threats to anyone who might violate their instructions," al-Hassany told Mawtani.

"The list of instructions would start with a ban on enlistment in the Iraqi security forces, or co-operating with them, and extends to include not only the imposition of the hijab on women, but also a threat to men for wearing clothes they considered un-Islamic."

"According to their instructions, trousers, shirts and neckties are Western traditions that are inappropriate to imitate. They also banned us from wearing T-shirts with prints, images or words in English, or even names of world-renowned celebrities and artists."

One man had to hide a grey shirt in a closet. Others lived in fear of arbitrary Al-Qaeda proclamations such as a ban on Playstations and threats that primary schools that refused to separate boys and girls would be attacked.

"One night, they blew up a shop for modern men's outerwear, to wipe out what they described as a source of decadence forbidden by Islam," said al-Tharthar mayor Ibrahim Ali al-Abbasi.

Why does Al-Qaeda love dress codes? PolicyMic's Nina Ippolito writes that Al-Qaeda's strict accounting practices stem directly from founder Osama bin Laden's leadership. As well as being a terrorist leader, bin Laden was a rich Sudanese construction company owner who studied business administration at King Abdulaziz University. The Al-Qaeda he left behind was the product of his extensive organizational skills, maintaining business practices derived from years of management experience.

And Al-Qaeda also inherited his strict (even among Islamic extremists) views of religiosity, which persist even through Al-Qaeda's status as a "network of networks." After Syrian terrorist group ISIS imposed similar dress codes on the northern province of Rakka, Turkish writer Mustafa Akyol wrote that "the idea that 'real freedom' equals 'submission to Islam' is very popular among conservative Muslims, even among those who are not nearly as fanatic, let alone violent, as Al-Qaeda."

Today's bin Laden-inspired extremist groups operating in conflict zones take those impositions to their logical extremes, alienating vast swathes of the population. As Ippolito noted, like any multinational organization, "Al-Qaeda inserts itself and its bureaucracy into unfamiliar countries and cultures to expand its influence" — which is why the majority of its fighters are rarely native to the countries they claim to rule. Life under their version of Islamic law isn't fun; in Somalia, offenses like smoking tobacco earned public floggings.

The security situation in Iraq remains abysmal. Though Al-Qaeda fighters don't command the loyalty of the populations they hide in — as evidenced by al-Jura residents' public rejoicing upon their arrest — government forces aren't capable of stemming the tide. Cities like Fallujah and Ramadi reportedly are partially under the control of Al-Qaeda and ISIS, while according to the UN, 2013 was the deadliest year in Iraq since 2008; 7,818 civilians and 1,050 government forces have been killed since January.