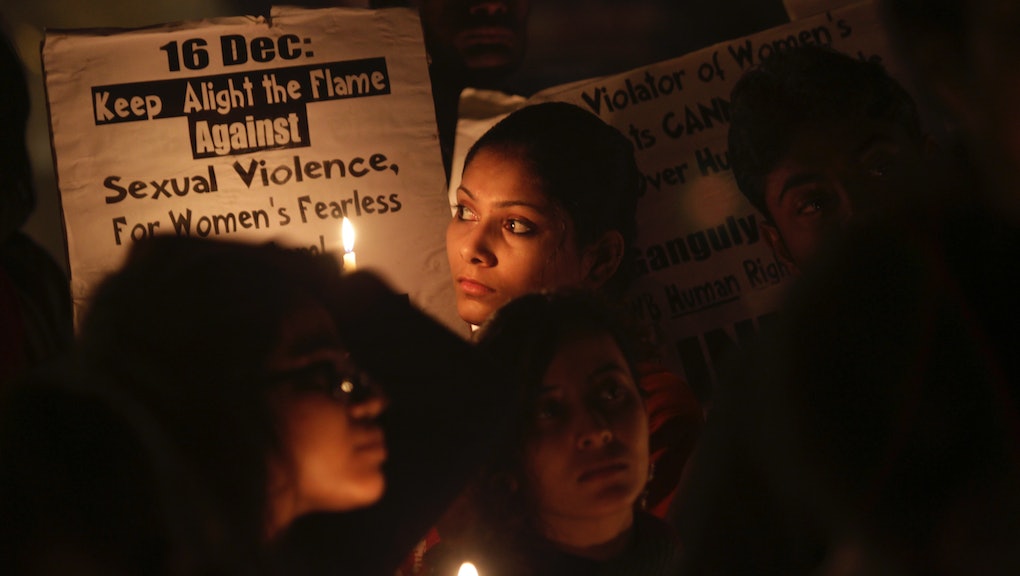 The Brutal Gang Rape and Murder Of a Young Girl Has Rocked India. Again.

Editor's Note: This post contains some graphic language on rape and assualt.

Just days after the vigils that marked the one-year anniversary of a New Delhi woman's infamous death, India is, once again, beginning the year with news of an absolutely horrific case of gang rape and murder. In October, a 16-year-old girl was knocked unconscious and raped by a group of six men near her parents’ home outside of Kolkata. She was raped and beaten by the same group of men again the next day after she went to the police to report the first attack.

After months of delays, aspersions, and harassment that forced her family to flee their home, the victim was set on fire by attackers on December 23 in an incident that police initially reported as a suicide attempt. The victim, whose name cannot be disclosed by law, succumbed to the burns covering 40% of her body on New Year’s Eve.

On New Year’s Day, police finally responded to mounting outrage and made their first arrests in the case. At the same time, they refused to release the girl’s body to her family; in a mind-boggling move, the department reportedly attempted to cremate her body a day early without the family’s permission in order to avoid its presence at a planned rally.

A doctor’s report has revealed that the girl was pregnant at the time of her death.

The background: Sexual violence and violence against women were at the forefront of the news in India throughout 2013, after a brutal rape and murder at the end of the previous year. On December 16, 2012, a young physiotherapy student was traveling home by bus with a male friend after watching the movie The Life of Pi. The two were gruesomely beaten by six men riding the same bus, who proceeded, along with the driver, to assault and rape the woman with a rusty metal bar before flinging the pair out of the moving vehicle. (The driver attempted to run the woman over, but her companion was able to grab her aside at the last moment.) The woman sustained extensive internal injuries that required the removal of most of her intestines. Despite being airlifted to Singapore for further treatment, the victim passed away on December 29, 2012.

The egregiousness of the Delhi gang rape case — including preposterous victim blaming from the defendants’ lawyer, who claimed that he had never “seen a single incident or example of rape with a respected lady … even an underworld don would not like to touch a girl with respect” — led to widespread public protests throughout India and abroad, and placed an increased focus on changing attitudes, ending harassment, creating safe public spaces, and facilitating the reporting of threats throughout the subcontinent.

Moving forward: Stricter laws are a good start in the country, but it’s clear that India has a long way to go before women can feel safe in public spaces. Until then, terrible reports will continue to make headlines, and vigilantism, like that by the Gulabi Gang, will increase. With any luck, the politicization of the 16-year-old’s death can be replaced with a dialogue surrounding sexual violence that ends preposterous shaming of victims, encourages police to actively pursue the cases now being brought to their attention, and establishes public spaces where women and girls can feel safe whenever they deign to do so much as take a bus or leave their house.

As hard as it is to read about cases like the above, their publication and dissemination is the best hope for creating a consensus toward change.