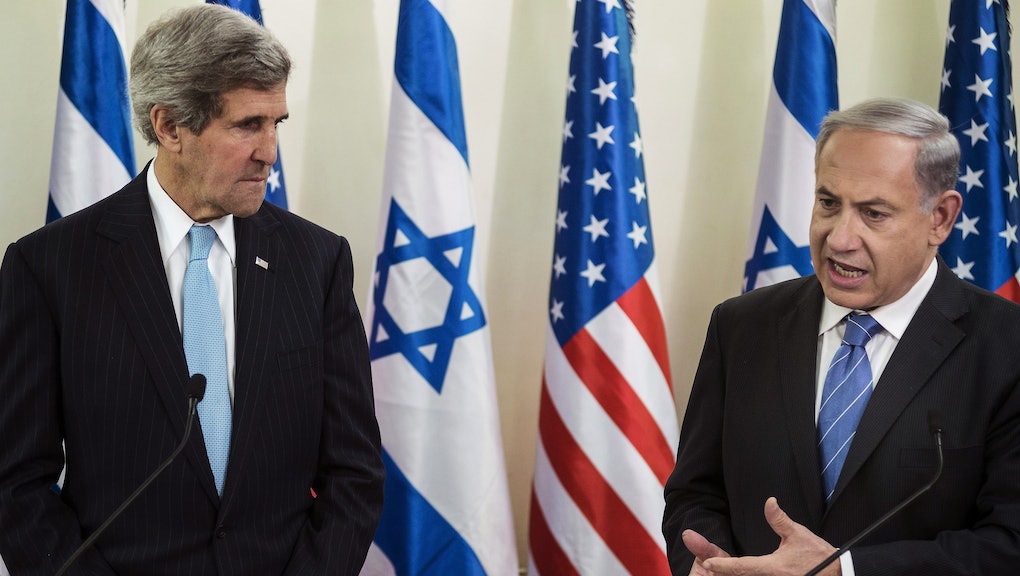 The History of Israeli-Palestinian Peace Talks in 13 Photos

Secretary of State John Kerry is once again in Jerusalem to broker a peace deal between Israel and Palestine.

Although he has insisted that finalizing a deal is not "mission impossible," Kerry is facing an uphill battle: Decades of negotiations have failed to find a sustainable solution for the ongoing Israel-Palestine conflict.

Here are 13 memorable moments from the past talks:

After Egyptian President Anwar Sadat made a historic visit to Jerusalem in 1977, U.S. President Jimmy Carter decided that the time was ripe for peace talks. The following year, he invited Sadat and Israeli Prime Minister Menachem Begin to the presidential retreat at Camp David. While the accords recognized Israel as a state and led to a treaty between Egypt and Israel, Palestinians did not have representation.

In this photo, the three leaders are shaking hands after announcing the results of the accord.

The U.S. and the Soviet Union jointly convened this conference, which had many more countries participating than the last time: Israel, Egypt, Syria, Lebanon, and Jordan. While there were Palestinian delegates, the Palestinian Liberation Organization (PLO) was not invited. The conference led to a peace treaty between Israel and Jordan.

In this photo, Israeli Prime Minister Yitzhak Shamir and U.S. President George H. W. Bush are laughing as they begin the conference.

The Oslo talks finally included the PLO, and led to a mutual recognition between Israel and Palestine. The secret negotiations took place in Norway, and resulted in the Israelis agreeing to pull back some troops and the Palestinians establishing the Palestinian Authority. The accords were finalized at a signing ceremony on the White House lawn.

The Hebron Accord went further into detail about implementing aspects of the Oslo Accords, including withdrawing Israeli troops from Hebron. After four months of negotiations, the accord was finalized.

In this photo, Israeli Prime Minister Benjamin Netanyahu is taking the phone from Arafat. The person on the other end of the line is Clinton, waiting to hear the news.

After Hebron, the talks at Wye River were seen largely as a failure. The 21-hour summit resulted in vague promises from Israel to pull back from the West Bank, and from the Palestinian Authority to combat terrorism. Few of these promises were actually fulfilled, and the relationship between the involved parties reportedly grew worse.

In this photo, Clinton and Secretary of State Madeleine Albright are moderating the talks between Netanyahu and Arafat.

This summit had ambitious goals to address the concerns that had never been brought up before: Jerusalem, statehood, boundaries, and the rights of Palestinian refugees. While the talks were more detailed than ever, the two sides could not agree on a consensus. The talks ultimately failed, although secret negotiations continued to take place afterwards.

In this photo, Israeli Prime Minister Ehud Barak and Arafat are having an awkward play-fight about who should enter the building first, while Clinton watches from a distance.

On his way out of office, Clinton set up this "bridging" summit to repair relations and to continue the peace talks. This time, the talks did not take place at the top level, but instead between ministers and negotiators. Both sides announced that a resolution was closer than ever, but time ran out as Clinton and Barak left office, and the results were never finalized.

In this photo, Israeli Foreign Minister Shlomo Ben-Ami shakes is shaking hands with Ahmed Quriea, the chief negotiator for Palestine. Around the table are other members of the delegations.

After the failure of these bilateral talks, Saudia Arabia decided to host an Arab League summit to find a regional solution to the conflict. While the members agreed on a two-state solution, the main parties yet failed to finalize the details, and the talks went nowhere.

This time, the Quarter on the Middle East – U.S., Russia, European Union, and the UN – came up with a solution, which would work as a "road map" for future negotiations. The plan called for a freeze on Israeli settlements and for the establishment of a Palestinian state. While it generated a lot of buzz, the road map has still not been adopted.

This was not an official agreement, but rather a solution drawn up by negotiators from both sides. The Geneva Accord would have granted the West Bank to Palestine, and the Western Wall in Jerusalem to Israel. It was never adopted.

In this photo, Palestinian negotiator Yasser Abed Rabbo and Israeli negotiator Yossi Beilin are about to shake hands at the signing ceremony.

The Annapolis Conference was hosted by Bush, and resulted in little other than calls for peace.

In this photo, Israeli Prime Minister Ehud Olmert, Bush, and Abbas are shaking hands at the opening session of the conference.

After taking office, Kerry set off to the Middle East to restart the negotiations. Israel agreed to release 104 Palestinian prisoners, and since then, talks have been slowly moving along. Kerry now has four months left until the prescribed deadline.

In this photo, Israeli President Shimon Peres, Kerry, and Abbas are shaking hands at the World Economic Forumon the Middle East and North Africa, which took place in Jordan on May 26.