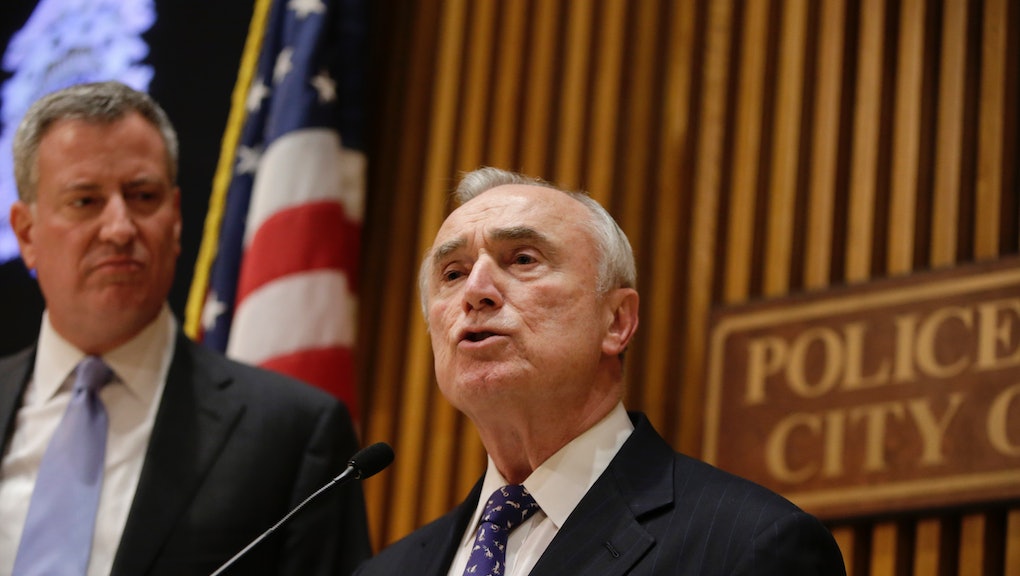 Many have argued that Mayor Bill de Blasio's surge in the polls was because of his repeated opposition to the NYPD's stop and frisk policy during the campaign. Here he is in May, speaking out against the practice.

De Blasio has stated, "The overuse of stop and frisk is not making us safer," and that it is "tearing apart the relationship between police and community." In a campaign advertisement, de Blasio misleadingly claimed he wanted "end the era of stop and frisk that targets minorities." The mayor has also called for more police oversight and a "strong racial profiling bill."

Bill Bratton, on the other hand, is a vocal supporter of stop and frisk. He has referred to the technique as "an essential tool of policing," as a "constitutionally protected act by police," and claimed that without stop and frisk, "cities will be overrun with crime." Bratton expanded the use of "stop, question and frisk," as he likes to call it, techniques while police commissioner of New York City and Los Angeles.

Bill Bratton has already served as NYPD commissioner from 1994 to 1996 under Rudy Giuliani. Bratton is known for implementing a crime-fighting program based on aggressively pursuing small crimes (such as vandalism, loitering, and jumping turnstiles) to create a culture in-conducive to serious crime, a strategy known as the "broken windows" strategy of policing.

Bratton also implemented a statistics based crime identification system called CompStat. While serving as police commissioner in Los Angeles, Bratton combined Compstat-esque statistical technology with stop and frisk techniques by creating a database of 40,000 "known gang members" who were then often stopped and frisked by officers.

Mayor de Blasio separated himself from other democratic candidates based on his "Tale of Two Cities," a major part of which was opposition to the destructive effect stop and frisk has had on minority communities. It doesn't seem that, as according to his spokesman Eric Koch, Bill de Blasio has "made it abundantly clear that on day one as mayor he will work to end the overuse and misuse of stop and frisk."

Instead, it seems that on day one as mayor, de Blasio cemented the use of stop and frisk for years to come. It is discouraging, given the his frequent promises to reform the practice, that he would nominate one of stop and frisk's strongest supporters to be the next police commissioner.