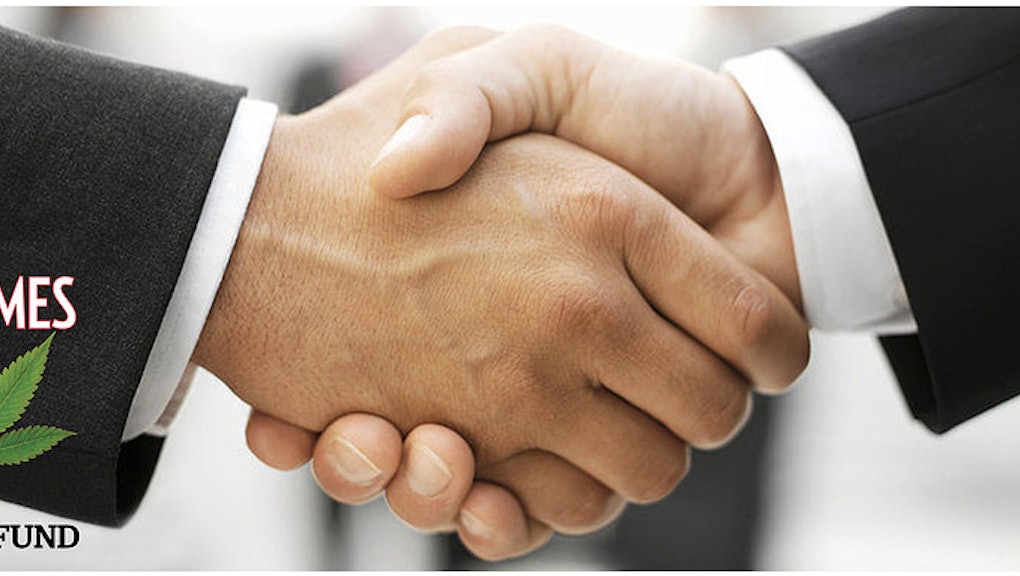 Why is everybody buzzing about silly ol' David Brooks? We have more important pot-related news to talk about.

High Times, the largest cannabis-related publication in the world, recently announced that it is making moves to establish a private equity fund to provide legitimate pot startups with much-needed capital.

According to CNBC, the "High Times Growth Fund" aims to open next month and to round up as much as $100 million over the next two years. This announcement of this fund was made in the midst of two other major milestones in the cannabis world: the appointment of a marijuana editor at the Denver Post newspaper, and of course the start of legal marijuana business in Colorado (which has yielded over $1 million in sales on its first day).

If successful, the High Times Growth Fund will be the most influential financial force in the legal marijuana industry ecosystem, as no other entity would possess its unique combination of capital and clout. Marijuana-related businesses currently encounter much difficulty obtaining reliable access to capital via traditional means, most likely due to the cultural uneasiness experienced by marijuana as a commodity. The fund will go a long way to reconfiguring the economic dynamics of this industry, and will serve to provide a strong capital foundation for budding weed entrepreneurs all over the country. They will also be the recipients of what appears to be strong business projections — according to the following stats published by USA Today, the future looks good for anybody looking to invest the industry.

Of course, there remains much room for befuddlement. As I write, the legal cannabis industry is still negotiating its awkward early days where ambiguity is the status quo. After all, legislation remains unclear on even the most basic things like the spaces within which people are allowed to consume weed products. Furthermore, the process of obtaining and using a license to assemble a marijuana business is burdened by a bureaucratic structure that is still figuring itself out, if at all.

Nevertheless, we are still privy to an exciting new future. As someone who largely understands finance through the lens of the tech industry, I am particularly curious about the investment style that High Times Growth Fund will choose to adopt — and whether or not they will position themselves as venture capitalists. Although the bulk of the investments will likely go into more traditional business organizations (say, like those that operate in the style of food and beverage supply chains and those that are straight-up institutions of marijuana production), I wonder about the magnitude at which High Times investors will take serious bets on more experimental businesses, like those constructing new technologies to produce and consume marijuana or those looking to find new scientific or medical uses for cannabis. Will the weed industry possess a similar culture of investment and entrepreneurship as the tech industry, with buzzwords like "disruption" thrown about and big conferences that fill hotel event halls with eager, enterprising young college dropouts?