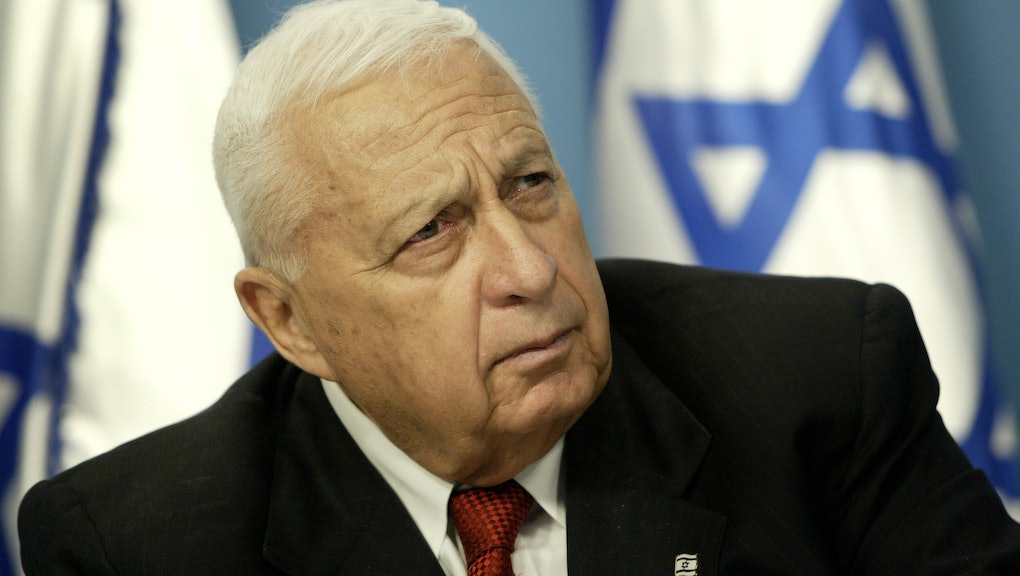 Throughout his tenure in various positions, including Prime Minister, or as head of the conservative Likud party, Ariel Sharon was widely seen by many in the Middle East and elsewhere as hateful of Arabs, careless of their plight, and unflinching in preventing Palestinians statehood, even as he pretended to work towards it with his Arab counterparts.

Sharon did many things for Israel: he increased security, favored settlers, and lived a storied life of military and government service that spanned 60 years. But there are those whose lives have been made much worse by some of his decisions, and in the interest of learning from history's mistakes, those decisions should not be forgotten.

Here are five important moments from his life, where we shouldn't forget the entire picture:

Ariel Sharon led a colorful career in the Israeli Defense Force (IDF). Of his more storied actions is the leadership of the infamous “Unit 101” — a company-sized unit of the Israeli Special Forces whose mission it was to carry out reprisal attacks against Palestinian militants who attacked Israel. With Sharon at the helm, they received their orders directly from IDF General Staff and carried out various raids into Arab areas.

One such raid in 1953, after just one month of training, was an exercise in the Gaza Strip inside a Palestinian refugee camp that ended in the death of 20 Arabs. The attack was internationally condemned as deliberate mass murder. But the Qibya massacre two months later, also carried out by the Unit and support troops of the IDF, made the Gaza incident look like a minor border skirmish. The attack ended in the death of 69 people, including many women and children who died inside their homes as they were blown up. As international condemnation reached a pinnacle, Israel denied that the IDF was responsible, instead blaming it on radical Israeli citizens.

While many may herald Sharon as a peacemaker for ordering the withdrawal of IDF forces from the Gaza Strip in 2003, others have a valid argument that this was a cunning move meant to stall any further cooperation with the Palestinians.

In public, Sharon spoke of the decision as a way to take the reins and make peace before the Palestinian contingency did. However, in an interview with Haaretz, Dov Weisglass, Sharon’s former chief of staff, close personal aid, and point man with the United States on President Bush’s “Road Map for Peace” that would have set Palestinians and Israelis on a path towards a two-state solution, stated that the Gaza disengagement plan, “supplies the amount of formaldehyde that is necessary so there will not be a political process with the Palestinians."

He went on to say that, “you prevent the establishment of a Palestinian state, and you prevent a discussion on the refugees, the borders and Jerusalem (sharing the city with Arabs).”

Sharon’s secret meeting with Eliot Abrams, at the time the Senior Director for Near East and North African Affairs on the U.S. National Security Council (NSC), in which he mentioned his plan to impose his own settlement on the Palestinians, outlined his true motives.

3. His September 2000 Visit To The Temple Mount

Sharon’s timing for this could not have been worse, and his visit to Islam’s third holiest site at the end of Ramadan while accompanied by about 1,000 Israeli policemen is said to have helped catalyze the second Palestinian intifada (uprising).

In fairness, hostility had already come to a roiling boil prior to this event due to the gradual breakdown of the Oslo Accords that would have hammered out a solution between the sides, but Sharon knew the potential consequences of how he timed his actions and visited anyway, playing into the hands of Palestinian radicals who were looking for an opportunity to violently rebel. In fact, more moderate Palestinian leaders asked U.S. and Israeli officials to keep Sharon from visiting the site, knowing that it would incite a dangerous reaction. But Sharon, knowing this would help him win the coming election for Prime Minister against Benjamin Netanyahu, paid them no mind.

4. The Sabra and Shatilla Massacre

While an Israeli fact-finding committee determined that Sharon was not directly responsible for the massacre of hundreds of Arabs, they did find that he was fully aware of the entry of radical Christian Phalangists that laid siege to the camp under Israeli watch and committed the atrocities.

Sharon, who at the time was defense minister under Menachem Begin, was the one who masterminded the 1982 IDF invasion into Lebanon, which precipitated the event. While the Israeli Army’s main mission in Lebanon was to root out Palestine Liberation Organization (PLO) extremists that had been shelling northern Israel, Israel made allegiances with many different armed Christian militias in Lebanon and funded, trained, and met with them on a regular basis, including the Phalangist group responsible for the atrocities.

Ultimately, Sharon was found responsible for not performing due diligence to make sure that the heinous acts were prevented, and was forced to resign.

5. Sharon And The Infamous Security Barrier

During President George W. Bush’s attempt to bring peace between Israelis and Arabs, Sharon refused to cooperate on a key issue: halting construction on Israel’s barrier against the West Bank that was meant to keep out suicide bombers, but also conveniently juts deep into the West Bank, allowing for further Israeli settlement and carving up the potential future location of a Palestinian state alongside Israel.

The barrier has ultimately made it more difficult for Arabs in their day to day lives, causing them economic trouble, familial hardship, and making it far more difficult to create a future state of their own based on agreeable boundaries.

During talks over President Bush’s “Road Map for Peace” that was meant to bring Israeli and Palestinian leadership to agreement on a final deal, Palestinian Prime Minister Mahmoud Abbas said that, “If the settlement activities in Palestinian land and construction of the so-called separation wall on confiscated Palestinian land continue, a free Palestine state living side by side in peace and security in Israel is a virtual impossibility.”