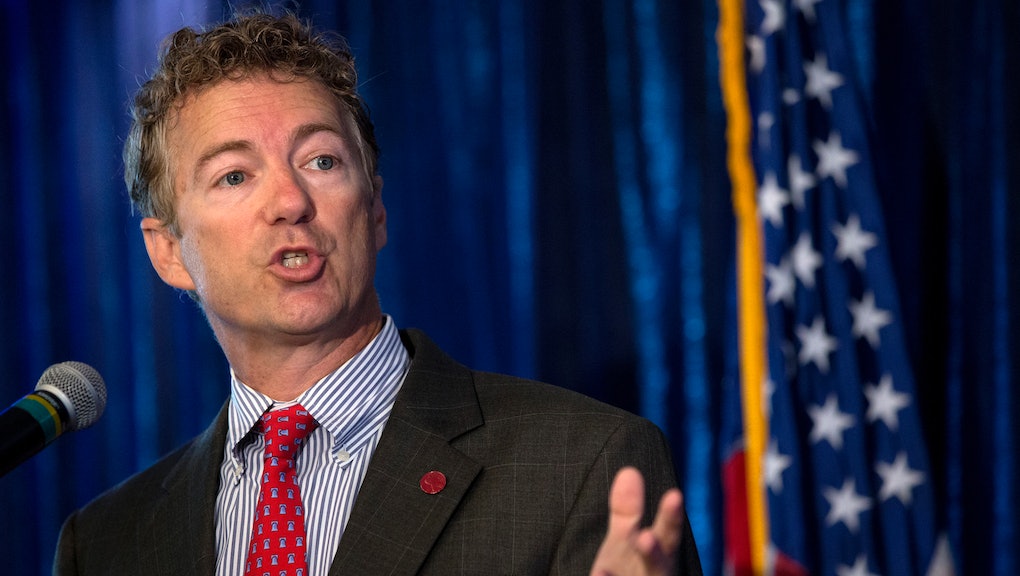 Rand Paul is Suing the Obama Administration Over NSA Spying

The news: On Friday, Sen. Rand Paul (R-Ky.) announced he was suing the Obama administration over the National Security Agency’s data collection policies. Paul said on the Hannity show on Friday night that everyone in the U.S. with a cellphone would be suitable to join as a class action suit.

Citing the Fourth Amendment, Paul said, “The question here is whether or not, constitutionally, you can have a single warrant apply to millions of people. So we thought, what better way to illustrate the point than having hundreds of thousands of Americans sign up for a class action suit.

“We want them to protect the right to privacy. We think we can have security, that we can defend against terrorism, but that doesn’t mean that every single American has to give up their privacy.”

Ken Cuccinelli, the current attorney general of Virginia who ran for governor as a Republican candidate last year, is part of Paul’s legal team.

The background: Paul’s announcement was spurred by Friday’s news that the Foreign Intelligence Surveillance Court decided to renew the NSA's authority to collect metadata on telephone calls en masse until March.

In December, the Federal District Court of Southern New York opinion ruled the program’s collection constitutionally sound. This decision was positively referenced in the announcement of the program's renewal.

And yet in December, the D.C. District Court decided that the plaintiffs in one case had standing to file suit, which could result in the court’s deciding that the program violates the Fourth Amendment.

The takeaway: Paul has gathered between 250,000 and 300,000 people who voluntarily signed on to the class-action suit via his Paul's RANDPAC website. Paul may have a point: the NSA’s tactics often have little to nothing to do with investigating terrorism. Scandals surrounding the NSA are cropping up daily, from the diplomatic incidents to lies about the programs’ efficacy.

The NSA is also getting hammered from the opposite end of the political aisle, with Sen. Ron Wyden (D-Ore.), Mark Udall (D-Colo.), and Martin Heinrich (D-N.M.) publishing an op-ed in the New York Times calling for an end to the “NSA’s dragnet.”

They wrote, “The framers of the Constitution declared that government officials had no power to seize the records of individual Americans without evidence of wrongdoing, and they embedded this principle in the Fourth Amendment.

“The bulk collection of Americans’ telephone records — so-called metadata — by the National Security Agency is, in our view, a clear case of a general warrant that violates the spirit of the framers’ intentions.”

So how do the American people feel? A research poll back in June suggested that a slim 56% majority of Americans favored tracking phone records in the interest of investigating terrorism. Further, 62% said it is more important for the federal government to investigate possible terrorist threats, even if that impinges on personal privacy.

As we debate these issues, the NSA will continue to collect our data until March.