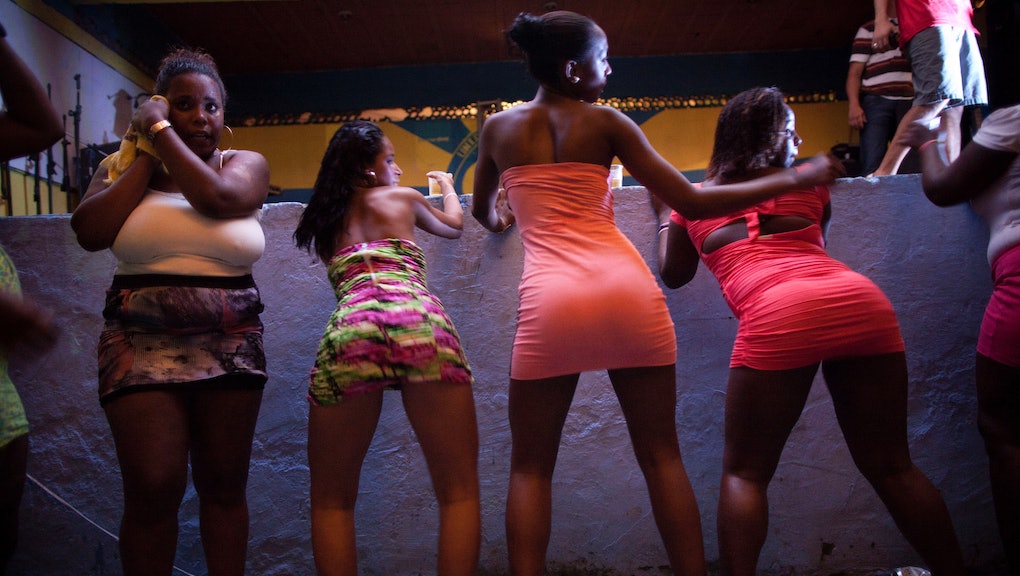 Brazil Prepares for the World Cup By Silencing Favela Culture

Take the song Dança do Créu, a 2008 sensation. The track basically consists of repeating the word créu, translatable to "screw," at five progressively faster speeds. Female dancers keep pace by bouncing their backsides, while the male singer — also named Créu — thrusts his pelvis into the air. The performance is repetitive, lewd, denigrating to women, and seemingly devoid of any musical virtue. For many well-to-do Brazilians, this description is true for the entire genre to which Créu belongs: funk — pronounced "funky" in Portuguese — a form of dance music that is exceedingly popular in the country's populated favelas, or slum communities.

But not only do many consider funk distasteful, there is increasing pressure to make it illegal. As of Jan. 1, residents of São Paulo risk almost a $500 fine if they play the music louder than conversational level. The law intends to ban outdoor funk parties — an iconic element of favela life — with the help of military police. This crackdown has been underway for several years in Rio de Janeiro as well, where funk parties have been stifled in areas controlled by state security forces. Brazil's congress is even considering a national ban on the gatherings.

Though historically neglected by the government, there has been a systemic campaign to tame the favelas ahead of this summer's World Cup and the 2016 Summer Olympics.

In Rio, specialized police forces called Pacifying Police Units or UPPs have sought to contain high rates of crime and violence. Additionally, construction projects for the mega events have threatened to displace 250,000 people in low-income neighborhoods across the country. But pacifying the favelas has meant more than demolitions and police excursions; it has also meant targeting their culture.

Funk carioca, or favela funk, was popularized in the slums of Rio de Janeiro during the 1980s as a hybrid of Miami Bass and local influences. Its lyrics are explicit — pornographic even — and often deal with drugs, crime, and violence against the police, and aggressively sexual portrayals of women. Decades since its emergence, the genre remains strictly associated with the favelas and their poor, especially black, residents. For this reason, any attempt to suppress funk also carries strong socioeconomic connotations.

Proponents of banning funk parties say the gatherings are sites of violence and heavy substance use, that the loud music is disruptive for residential areas, and that the gratuitous lyrics promote a culture of violence and sex. But supporters of funk say that the music is a form of self-expression and that their lyrics reflect the everyday difficulties of favela life. Despite the genre's reputation, funk songs are not exclusively about partying or women, and can offer powerful social commentary. Drug and alcohol consumption are hardly limited to funk parties, they point out, and are just as common in exclusive nightclubs — though the police rarely raid those. Further, the outdoor gatherings are one of the few entertainment options available to the poor in cities like Rio and São Paulo, which rival New York and Paris in the cost of living.

The characterization of funk as a promoter of violence also contains a morbid irony, since the crackdown on funk has lead popular singers (called MC's) to become common targets of assassination, even by the police and paramilitary forces. Outside the favelas, these deaths have been met with both indifference and celebration.

According to Juca Ferreira, Brazil's former Minister of Culture, the criminalization of funk is nothing new for Brazil. Samba and capoeira, though now integral parts of Brazilian nationalism, were also once banned because of their roots in Afro-Brazilian culture.

"It is part of Brazil's dark side, carried since the era of slavery, the criminalization of cultural practices of large segments of the population, those that don't have access to culture and all the other services that state and society provide," Ferreira said.

There is no question that the favelas stand to benefit from improved law enforcement and infrastructure, and that the situation should be a priority for the government. But as Ferreira said, "I have a hard time believing that the police are society's best cultural critics."