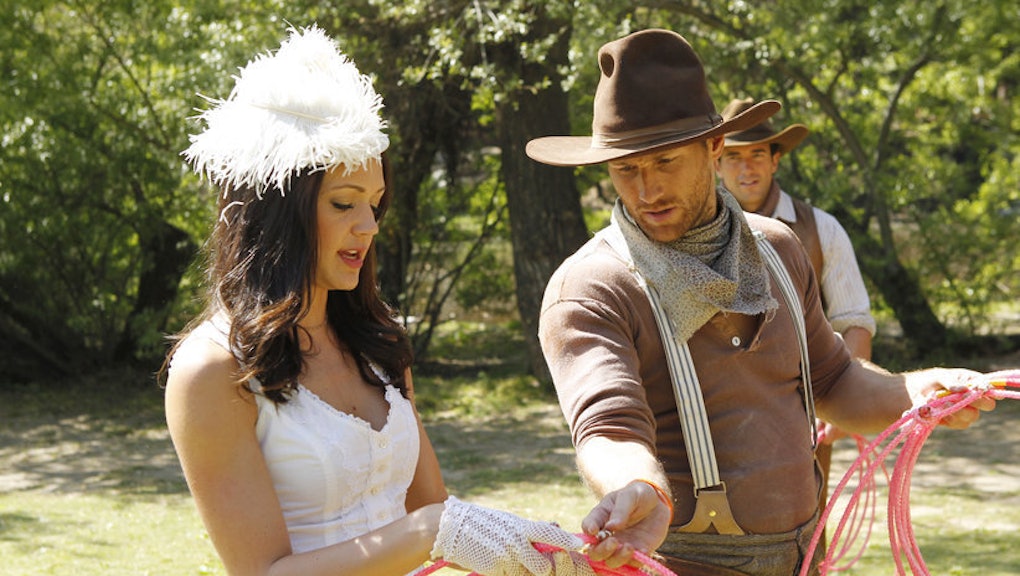 Season 18 of The Bachelor kicked off its two-part premiere last night with a "Countdown to Juan Pablo," to introduce the first Latino bachelor Juan Pablo Galavis, a Venezuelan soccer player who retired when his four-year-old daughter Camila was born. As always, it was absurd.

Even more absurd is that this show has been popular for 18 seasons. The preview promises more of the same romantic messages we've been getting for ages on similar shows. We can't help but wonder: what would someone think about American romance if all they'd seen were seasons 1-18 of The Bachelor?

Here are some lessons we've learned that we should probably unlearn ASAP.

According to The Bachelor, all of America is straight. It goes without saying that the Bachelor has never been a gay man, nor has the Bachelorette been a lesbian.

However, not even bi-participants are welcome, it seems: One contestant revealed that she "flirts with girls and guys" and the producers put a red X across her image — she could never be right for Juan Pablo.

As each woman is told she made it on the show, she screams, jumps up and down, and hugs the messenger. In the first case, the woman jumps up onto the man who shares the good news, wrapping her legs around his body.

The show ends with a preview scene of the girls sitting together in the outdoors, then jumping up and running away screaming from a raccoon. Women might have screamed more than they talked in this episode.

As the first Latino bachelor, Juan Pablo has a chance to defy stereotypes. However, his introduction on the ABC website focusing on his "Spanish accent" and "salsa moves" is a fair reflection of the stereotypical portrayal of Latinos on the show so far.

When introducing his large family, he calls them "crazy" no less than three different times. Their "charming chaos" is characterized by being loud and liking spicy food. Classic.

A few select quotes from the preview montage:

"These are crazy girls. They are the reason that I'm crying."

"Her actions just make me think of King Kong beating on his chest."

"These girls are fucking with my life."

"She thinks that this is her man."

5. Looks are the most important part of love.

Granted, it is somewhat inevitable to judge appearances on a first impression. But the absurd importance of looks in this show is highlighted in the montage of women saying how hot Juan Pablo is, and, most importantly, by the woman who tells him she loves him before they've met. Because he's hot.

6. If it's not dramatic, you aren't doing it right.

The montage of the season to come included plenty of shots of the women crying, one even commenting "No one has ever dealt with this before." Since this show is in its 18th season, that seems unlikely.

The real implication, unfortunately, is that jealousy and pain are an inherent part of love, that love should hurt — which, of course, it shouldn't.

Even the largely touching remembrance of Gia Allemand, a previous bachelorette who passed away, was tarnished by her being described as a "real girl" because "she had insecurities, she was worried about love." It is a sad world when the best quality a woman can have is being insecure and focused on romance — especially in the light of Gia's suicide after an argument with her boyfriend over her suspicions of his being unfaithful.

7. Romance and motherhood are a woman's area of expertise.

In their submission videos, women say things like, "I'm tired of frogs. I want to find my prince," "I'm not getting any younger and my eggs aren't getting any more fertile," and "I want to get married, again." The women who say they want kids get green check marks whereas the woman who honestly answers "I'm not ready to be a step-mom" gets a red x.

Unfortunately, in all non-motherhood and romance spheres, women are utterly clueless. The commentator observes that some of the women showed real talent in their submission video — and then shows a clip of a woman touching her tongue to her nose. Contestant Elise, a first grade teacher, says she's learning Spanish for Juan — but gets tripped up in a two sentence conversation and says "Si, si." And just to fit in another stereotype, Christy is unable to pack her suitcase because she has so many clothes.

8. Men are players, women are sluts.

The contestant who reveals she isn't a virgin is given a "?" by the producers, whereas Juan Pablo is advised to wait 15 minutes and brush his teeth between make-out sessions — advice we can only hope he took, based on the number of clips of him making out with different women in the final montage. The old bachelor even asks him if he has a strategy for kissing them — because he's going to need it. Meanwhile, the women all call each other crazy (and worse) for showing their sexuality.