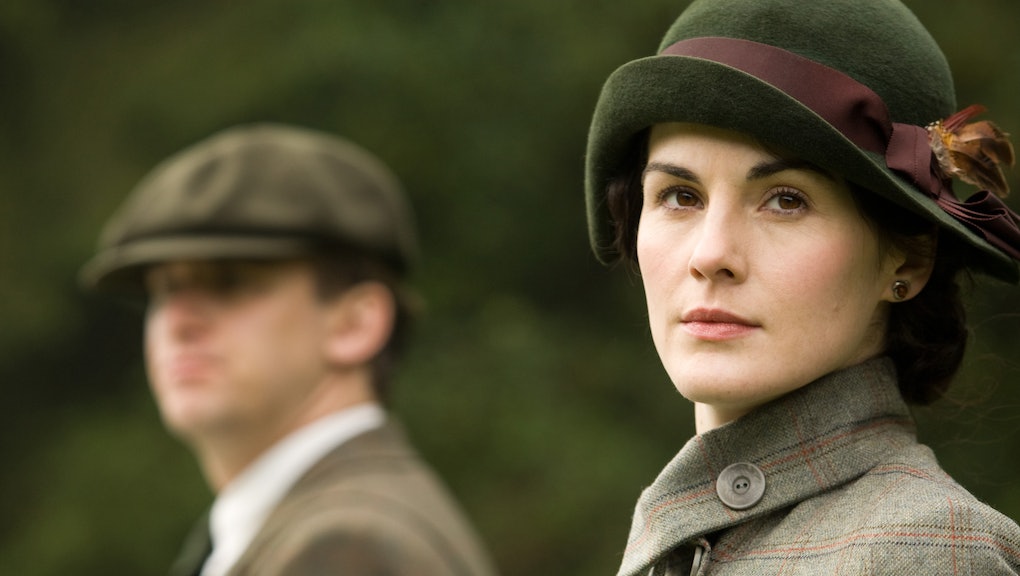 'Downton Abbey' Season 4 Premiere: Why the Series is Better Without Matthew

Downton Abbey's Season 4 premiered in the U.S. on Sunday night. Anyone who was missing the show was probably more than satisfied with the premiere's 2 hour run-time. But anyone missing Matthew Crawley was probably disappointed — the show is clearly better off without him.

With 120 minutes concentrated on moving on, the writers mostly focused on getting their ducks in a row: recovering after Matthew's death, addressing estate changes, and dealing with household turnover.

But Matthew's death wasn't even the episode's focus. It just opened up the show to pursue a number of more interesting arcs. Just a few minutes after the gloomiest opening credits in the history of Downton Abbey, Sarah O'Brien, that heartless, cold, Machiavellian schemer, proved she can do something even more dastardly than trying to kill Cora: she left Downton. In secret. To work for Lady Flintshire (Rose's mother) in India.

I'm actually more sad about her departure than Matthew's death for three reasons 1) O'Brien provided more drama in one episode (remember when she tried to out Thomas last season?) than Matthew did in 3 seasons 2) O'Brien could always be relied upon for a good, evil glare, and 3) her presence in the house in and of itself provided conflict. Lord Gratham hated her, but Cora loved her, putting her right in-between husband and wife. She and Thomas were allies against the rest of the household, until Thomas ticked her off, and then it was O'Brien vs. Thomas in the most epic downstairs power struggle in the history of the show. Even her relationship with Cora was full of conflict (she did try to kill her, after all, and did succeed in having Cora lose her baby).

But now O'Brien is gone! Who will be that deliciously dour pot-stirrer now? Yet this absence is so much more meaningful than Matthew's. And Matthew's disappearance from the show has only enabled the other characters.

Lady Mary is coming into her own. Without Matthew, Lady Mary sits around in black for about half of the episode, grieving for her husband and not caring for her baby. This allows Michelle Dockery to deliver some of the best acting she has given the show thus far. Her moments with the Dowager Countess are fantastic, but it's her tiff with father-in-spirit Carson that really provides a shining moment for both actors. At Carson's urging for her to fight for the estate, Mary comes alive and becomes one of the most interesting characters in the show. All thanks to Matthew's absence. Now, she has co-management of the estate with her father. Stubbornly patriarchal Lord Grantham pit against the strong will of his eldest, smart-as-a-whip-and-great-at-a-comeback daughter? This will be awesome.

Cousin Isobel briskly moves on (sort of) from her son's death by taking in Carson's old vaudeville partner and nursing him back to health. It's her version of becoming a cat-lady. She's becoming increasingly political, now free from her wet blanket of a son. I fully expect Isobel to become a flaming liberal, bent on justice and rights for all.

The Dowager Countess, aka Dame Maggie Smith, has the opportunity to 'comfort' everyone post-Matthew. She strolls through the episode giving her version of comfort, which, with the exception of Mary, consists of her usual put-downs.

Lady Rose, not to be dampened by the death of her cousin-in-law, runs around like a wild child. She causes a public fight and has to disguise herself as a maid. Mrs. Hughes struts around tut-tutting. Anna and Bates are happy. Thomas smirks and schemes. The Daisy-Ivy-two blond footmen love quadrilateral remains the same.

And everyone is more interesting now that Matthew is gone.