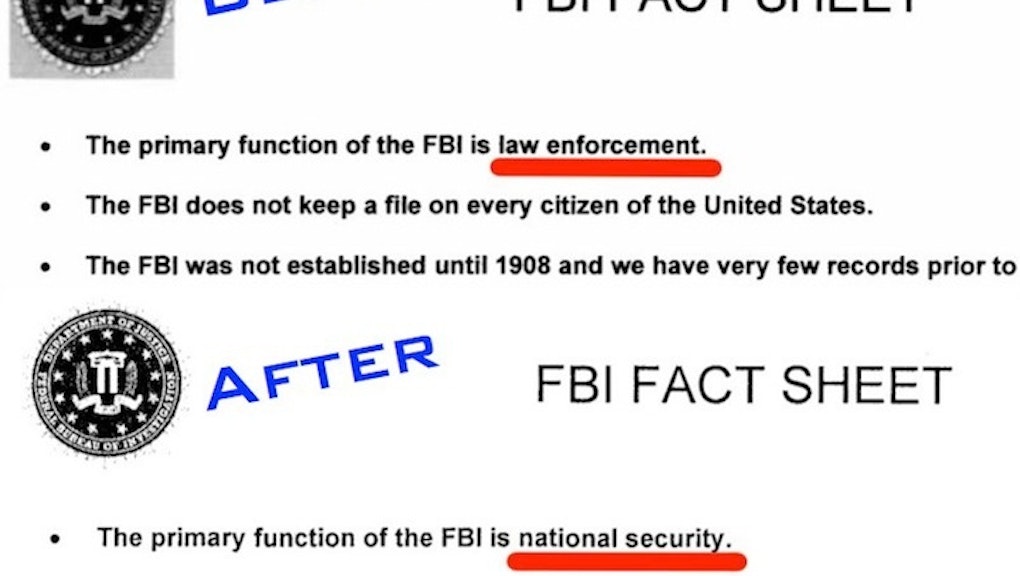 The FBI Just Edited Its Mission Statement ... and Took Out One Big Thing

The news: According to the Federal Bureau of Investigation, they're no longer primarily a law enforcement agency.

They're a national security agency.

The FBI's shifted focus is nothing new — the agency immediately made counter-terrorism its top priority after the 9/11 terrorist attacks. But it's taken them over 12 years to make it official. National security lawyer Kel McClanahan noticed the shift last month while scanning Freedom of Information Act (FOIA) requests returned from the FBI and upon reviewing his records, realized the shift occurred in summer 2013.

"What happened in the last year that changed?" McClanahan told Foreign Policy. "I think they're trying to rebrand. So many good things happen to your agency when you tie it to national security."

Marquette University professor Alan Theoharis, an expert on FBI history, also claimed that the timing was odd. "I can't explain why FBI officials decided to change the fact sheet ... unless in the current political climate that change benefits the FBI politically and undercuts criticisms," he said.

An FBI spokesman, Paul Bresson, said the agency is just trying to keep pace with the times and noted: "When our mission changed after 9/11, our fact sheet changed to reflect that." He further commented that "We rank our top 10 priorities and CT [counterterrorism] is first, counterintel is second, cyber is third. So it is certainly accurate to say our primary function is national security."

Why you should care: In 2010, the Washington Post reported that there were 1,271 government organizations and 1,931 private companies "working on programs related to counterterrorism, homeland security and intelligence in about 10,000 locations across the United States." All told, 854,000 people held security clearances. Many of the agencies do the same or similar work, creating an huge lack of focus and a pile of wasted resources.

Retired Army Lt. Gen. John R. Vines was tasked with reviewing the Defense Department's methods for tracking the most sensitive security programs. He said that "the complexity of this system defies description" and "because it lacks a synchronizing process, it inevitably results in message dissonance, reduced effectiveness and waste ... We consequently can't effectively assess whether it is making us more safe."

In other words: By 2010, America's security complex was far too large to track or even put under systemic oversight. That's years before Edward Snowden leaked details of the massive National Security Agency surveillance network which has collected unfathomable amounts of data on Americans' telecommunications use.

There are currently 17 agencies which fall under the branch of the U.S. intelligence community. Many of them are critical, but some agencies have mixed law enforcement and intelligence duties — such as the Drug Enforcement Agency, which might be one reason why the DEA is getting away with collecting information for criminal investigations from the NSA and covering it up.

Does it at least make us safer? According to Terror Factory author Trevor Aaronson, just 1% of the terrorists caught by the FBI are "real."

Of the 500+ people charged with federal crimes involving international terrorism since 9/11 attacks, some 250 were charged with "things like immigration violations or lying to the FBI who are somehow linked with terrorism," while another 150 were caught in sting operations organized by the FBI. (Many of these cases are arguably entrapment.)

Aaronson says five real terrorists have been caught in the U.S. since 9/11, including Najbullah Zazi, who tried to bomb the New York subway system, and Faisal Shahzad, who tried to set off a car laden with explosives in time square. There's also Jose Padilla, who plotted an attack with a radiological weapon, and the underwear and shoe bombers, Umar Farouk Abdulmutallab and Richard Reid.

Does the FBI's shifted focus to terrorism make us any safer? And is it coming at the cost of the agency's original role in combating federal crime?

Former FBI agent Brad Garrett thinks so. He told Foreign Policy: "Violent crime, property crime and white-collar crime: All those things had reductions in the number of people available to investigate them. Are there cases they missed? Probably."