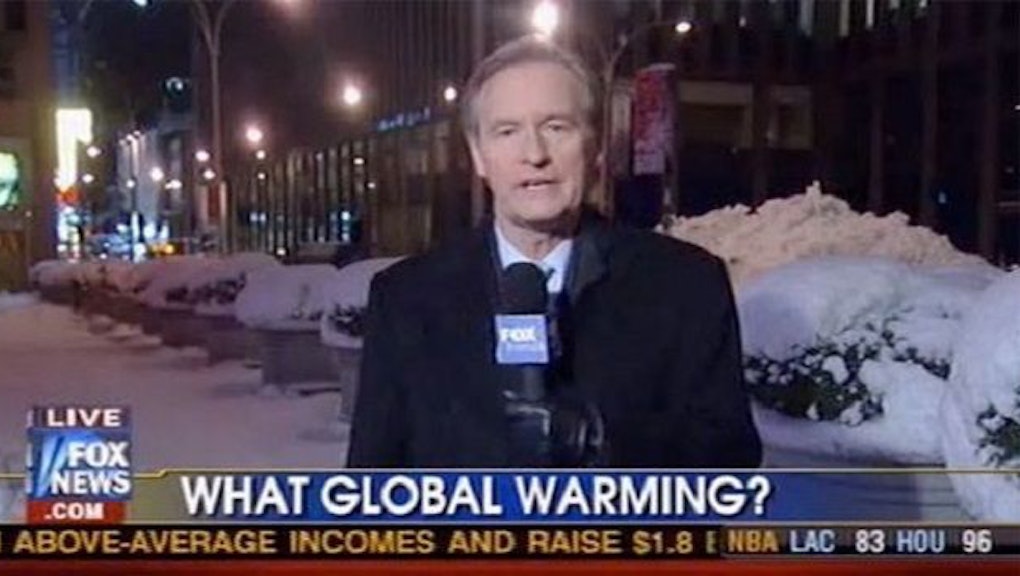 This week, millions of North Americans will be focused on their families’ wellbeing and survival as a terrifyingly named "polar vortex," a permanent weather system that’s normally centered over Canada’s Baffin Island and Siberia, dips down into the Great Lakes region.

The vortex will bring with it bone-chilling winds and sub-zero temperatures that haven’t been seen in 40 years, increasing the risk of frostbite, cancelling flights, creating icy road conditions, and inspiring an outbreak of well-intentioned but ultimately irritating jokes about global warming not being real, despite scientific consensus about the same.

Residents of central and eastern portions of the United States and Canada are being advised to bundle up in layers, stay indoors and off of icy roads, leave extra travel time if they must go out, check in with their airlines, abstain from using their ovens for heat, and not cite the single weather event as evidence against long-term climate change, especially in jest.

According to authorities, such jokes are best left to professionals, like the clueless and tired comic strip authors collected on this site.

By keeping ourselves warm, making sure to check in on vulnerable neighbors, and actively declining to talk about how, in Daily Show host Jon Stewart’s words, "Global warming is a total hoax, and I'll tell you how I know. Because it's cold. Today. Where I live,” we can get our communities through the brutal cold snap, and improve the unscientific discourse that often surrounds climate change.

After all, almost any small talk would mark an improvement, be it discussions about which day of the year is the “most depressing,” or talk of Dennis Rodman’s Space Jam-like diplomacy in North Korea.

Failing all else, residents of affected areas should seek out local warming centers, or respond to mindless talk about global warming by citing the raging heat wave in Australia while throwing their hands up in despair.