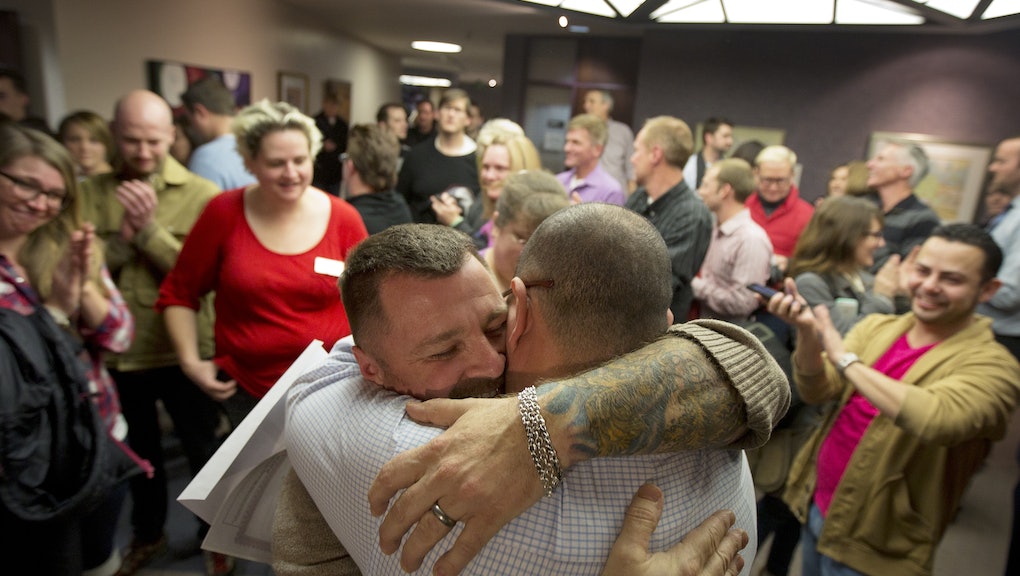 Freakout Over Gay Marriage in Utah Resurrects Ghosts From America's Past

In light of the Supreme Court's recent decision to temporarily halt gay marriages in Utah, it's time to take a closer look at some of the most common anti-LGBT arguments. After all, the Mormon Church been conspicuously active in anti-gay marriage movements (most notably by passing Proposition 8 in California,) while Utah has long been ranked as one of America's most staunchly conservative states, trailing only Alabama, North Dakota, Wyoming, and Mississippi in a Gallup survey last year. In short, the Utah brouhaha offers an ideal opportunity for supporters of marriage equality to deconstruct the underlying assumptions in their opponents' views.

Fortunately, the attendees of a Constitutional Sheriffs and Peace Officers Association meeting on Saturday offered up us some choice rhetoric for this kind of case study.

We can start with the words of Former Graham County, Ariz., Sheriff Richard Mack, who shared his thoughts on states' rights doctrine — as the irony of an Arizonan attempting to influence Utah's local affairs seemingly eluded him. "The people of Utah have rights, too, not just the homosexuals," Mack said. "State sovereignty supersedes what this judge did. The Governor needs to get some courage and grip."

Later, as he addressed the entire conference, Mack urged attendees to remember that "the way you take back freedom in America is one county at a time. The sheriffs need to defend the county clerks in saying, 'No, we're not going to issue marriage licenses to homosexuals.'" Event organizer Cherilyn Eager echoed these thoughts, proclaiming: "We need people to stand up and speak out. We need to get noisy. We need some outrage. It is about the sheriffs now coming out to protect the people."

The most striking feature in this language is their (most likely) unintentional subtext, which goes out of its way to categorize homosexuals as an "other" — not to be confused with legitimate Utah citizens. Mack juxtaposes "the people of Utah" with "the homosexuals," implicitly casting the latter as a group separate from and at political war with the former.

Just as noteworthy is the misuse of terms like "rights" and "freedom." Of course, considering that none of the individual liberties guaranteed by the Declaration of Independence and the Constitution are in any way endangered by the marriage of two consenting adults, it is fair to assume that the "rights" and "freedoms" being discussed here are primarily religious in nature. To address this, one need look no further than this statement from Thomas Jefferson:

"The legitimate powers of government extend to such acts only as are injurious to others. But it does me no injury for my neighbour to say there are twenty gods, or no god. It neither picks my pocket nor breaks my leg."

Whether the issue is polytheism and/or atheism vs. monotheism (a la Jefferson) or same-sex marriage vs. so-called "traditional marriage," Jefferson's fundamental point is logically unassailable — The mere presence of a belief or practice that contradicts one's own religious beliefs is not, in its own right, an infringement of one's religious rights and freedoms.

Finally, there is the ridiculous idea that the district court ruling which effectively legalized gay marriage violated Utah's "state sovereignty." For one thing, this betrays a serious misunderstanding of American history, since district courts like the one which legalized gay marriage in Utah were created by Congress in 1789 for the express purpose of preserving local sovereignty within the federal judicial paradigm.

What's more, the de facto nullification supported by Utahans like Mack and Eager — urging county clerks to refuse to issue same-sex marriage licenses, calling for a general "uprising" against the gay marriage ruling should it be upheld — has already been discredited. Even if one ignores how the implementation of this principle played out during the Civil War, one can look at the nullification crisis of 1830, in which South Carolina statesman John C. Calhoun resigned from the vice presidency to protest federal tariff policies he believed violated the rights of the people of his state.

Back then, Calhoun insisted that "if there be no protecting power in the reserved rights of the States" to prevent the implementation of federal policies they disliked, "they must in the end be forced to rebel, or submit to have their permanent interests sacraficed [sic], their domestick [sic] institutions subverted by Colonization and other schemes, and themselves & children reduced to wretchedness."

Because gay rights continues to be a "controversial" subject, it is unclear whether the Utah ruling legalizing same-sex marriage will be overturned. Should the Utah LGBT community see its brief guarantee of liberty squelched, however, they can take comfort in knowing that the setback will almost certainly be temporary. Indeed, they could almost be considered lucky to have adversaries who are so clearly motivated by prejudice and poor reasoning. Regardless of the language opponents of gay rights use to describe their anti-LGBT cause, history favors those who fight for freedom, not simply use the word.