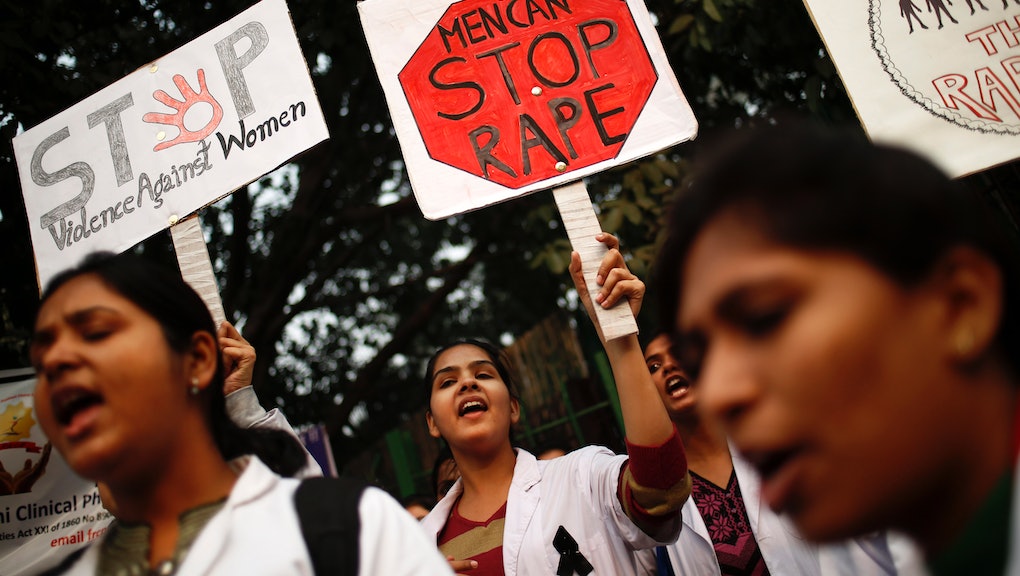 Yet Another Gang Rape Rocks New Delhi, But These Heroic People Are Fighting Back

Exactly one year after Jyoti Singh Pandey's tragic rape and death in New Delhi rocked the world, the brutal rape of a 16-year-old Indian girl from Kolkata, West Bengal again found national and international attention. After being raped on two occasions in October, she filed a police complaint. She refused to withdraw her complaint after being threatened by the perpetrators; she was then set on fire and succumbed to burn wounds on New Year's Eve. Her father suggested to the West Bengal state governor last week that he suspects foul play by the police, accusing them of hijacking the hearse containing his daughter's body. The father also accused police of threatening to shut down his taxi business if his family doesn't leave Kolkata.

Then it happened again. On January 14, a 51-year-old Danish tourist approached a group of men in New Delhi to ask for directions and six of them allegedly robbed and assaulted her. She made her way back to her hotel and was questioned by the police. In response, the Indian authorities rounded up 15 men for questioning. This is just the latest in a string of tragic events in India that have many questioning how safe it is for women, particularly tourists.

Women's groups and celebrities in India have responded to the string of assaults by speaking out and raising awareness. These are the heroes who have impacted India in the wake of these atrocities, eight organizations and people who have influenced the movement against sexual violence:

Background: In response to the anniversary of Pandey's death, Whistling Woods International Institute put together a video that criticizes men who leer at women. Called Dekh Le — which means "let's see" in Hindi — the short film encourages men to look at their own actions when they are staring at a woman and making her uncomfortable.

Commonly known as "eve-teasing" in India, public leering is widely prevalent in the country. The ad shows a variety of women, from an independent woman on a motorcycle to a conservative, burqa-clad woman, being stared at in public places. The video then turns the tables by showing the men their own reflections, thereby putting them to shame.

Impact: This video has received over 2 million views, with many positive reviews. Many have claimed that this video is important in raising awareness about the way women feel when they are being objectified in public spaces.

Criticism: Others have criticized the video, stating that men and women are naturally attracted to each other, and that there should be nothing wrong with men looking at women. One particular YouTube commenter stated that if there were men of equal attractiveness, this issue would no longer be important, pointing to a "feminist double standard."

Background: In 2012, Bollywood star Aamir Khan proposed to host a TV talk show unlike any other. Called "Satyamev Jayate," or "Truth Will Prevail" in Hindi, Khan attempts to tackle some of India's most pervasive social problems, including rape and sexual harassment. Specifically, he has had episodes dealing with domestic violence and child sexual abuse. With regard to this most recently publicized rape case, a member of the "Satyamev Jayate" team met and interviewed the parents of the victim from Kolkata.

Impact: This show has broken ground with high ratings, with viewership as high as 278 million people when it premiered in 2012. It has raised awareness of issues that were normally not spoken about in public, and changed social perspectives.

Criticism: Though the program has been widely lauded, critics have complained that Khan makes policymaking look easy and obvious, while also sensationalizing complex issues.

Background: Tired of sexual assaults and domestic violence problems ravaging one of the poorest states in India, Sampat Pal Devi decided to form the Gulabi Gang. Gulabi means "pink" in Hindi, signified by the pink saris that members wear. The objective of the group is to punish oppressive fathers and brothers by publicly shaming them or beating them with lathis ("sticks" in Hindi).

Impact: The group has grown from its inception in 2006 to include several thousand members and several male supporters. Along with their work in sexual violence and domestic abuse, they also aim to expose corruption in local government administration. While this is not directly related to the recent Kolkata rape case, it is a sign of awareness being raised on a local level in more rural parts of India. Devi and her group have gained popularity not just around India, but around the world.

Criticism: Despite Devi being lauded as a pioneer and feminist, some have taken issue with how the Gulabi Gang deals with certain cases. Nishtha Jain's documentary, Gulabi Gang, shows that while injustice binds these women together, caste, community, and religion still divide them. There is also criticism against the simplicity of the movement, leading many to ask whether it is enough to arm women with sticks to end domestic abuse.

Background: In many instances, there are other identities besides gender that impede equality and cause violence. In India, the most pervasive social categories include caste, community, and religion. Despite laws and statutes protecting them, the Dalit ("untouchable") community in India continues to suffer from economic and social discrimination. Dalit women in particular experience much higher levels of sexual exploitation and violence than women of higher castes.

Impact: Known as a SHG (self-help group), Parivartan Kendra has formed self-help savings groups to prevent women from having to depend on predatory moneylenders. They have also started education campaigns about sexual violence against women.

Criticism: Founded in 2004 and registered in 2007, this organization is still in its early stages. There have been reports of members of the community being unsupportive of the group's measures — to the point of them threatening and beating members. However, there is still much to be learned about Parivartan Kendra's work, which is mostly grassroots, local, and rural.

Background: The organization Astitva, meaning "identity" in Hindi,  was founded in 2008 in the newly-formed state of Uttarakhand, which reported over 1,000 incidents of violence against women in the same year. Also geared toward local initiatives in rural areas, Astitva hopes for its members to achieve economic and social empowerment, and supports mostly domestic workers who work seven days a week, often with low pay.

Rehana Adib, the director of Astitva, has ensured that no woman is turned away because of religion or caste. Astitva is also known to help Muslim victims of sexual violence who are subject to the difficulties of Sharia law. In particular, Astitva has helped provide relief to both Hindus and Muslims during religious clashes. One of its programs, called Haq se, which means "by right" in Hindi, is a Violence Against Women initiative.

Impact: Through Haq se, Astitva members are provided legal help by case workers so they are aware of their rights. Astitva also works with local law enforcement and other NGOs to improve the situation of their members. Most importantly, Astitva gives its members the courage to approach counselors, lawyers, and medical teams to deliver justice.

Criticism: Founded in 2008, this organization is also in its infant stages. The only real criticism is coming from local police, who are used to accepting bribes to cover up sexual assault cases. According to the Association for Women's Rights in Development's 2012 Global Report, Adib was falsely charged with trafficking after getting involved in the rape of a young woman in 2010. She soon went into hiding after several death threats, but after international pressure, she was able to restore her reputation and come out of hiding.

Background: All India Bakchod (AIB), an edgy Indian comedy collective, put together a satirical video featuring Bollywood actress Kalki Koechlin and TV presenter Juhi Pande. By parodying comments from leaders and the police, as well as using the most common remarks regarding rape victims, the video pokes fun at the way in which rape is justified in India.

Impact: The video received wide coverage, gaining almost a million views within five days. It has boosted AIB's YouTube subscription, and has done well in raising awareness about rape culture in India. The video has been so successful that it is being dubbed in different Indian languages.

Criticism: One of the problems of social media campaigns is that there isn't enough lasting impact. One suggestion has been that the campaign should allow for viewers to respond with their own "It's My Fault" videos.

Background: After being accused of calling India "a regressive state" by an angry journalist at a press conference, Bollywood star Mallika Sherawat defended and clarified her statement, saying that India is a regressive country for women. When the journalist accused her of giving India a bad name abroad, she claimed that all she did was tell the truth.

Impact: This clip went viral, gaining attention from major Indian news outlets and American sites like Buzzfeed. She's also been interviewed by Piers Morgan regarding her vocal opinion on women's rights in India.

Criticism: Her reaction has caused some Twitter backlash, with many Indians believing her to be unpatriotic. Additionally, some Bollywood stars, such as Priyanka Chopra, believe her comment to be offensive and unfair.

Background: Must Bol, which means "must speak" in Hindi, is an organization aiming to mobilize social media users and the youth in New Delhi — India's capital and the site of the 2012 rape case — to raise awareness about different forms of violence. They hope to use social media as a platform to discuss how violence affects men and women. They also want to engage in college campuses with this dialogue.

Impact: The organization has gotten over 5,000 young people involved through social media, and has over 500,000 page views on various discussions. It has photography and video contests, and encourages people who have experienced gender-based violence to anonymously share their stories. The organization has also been advocated by the United Nations Population Fund, United Nations Development Programme, and other international groups that are dedicated to eradicating gender-based violence.

Criticism: There has been little criticism against this group, but it is difficult to sustain an awareness campaign entirely on social media.