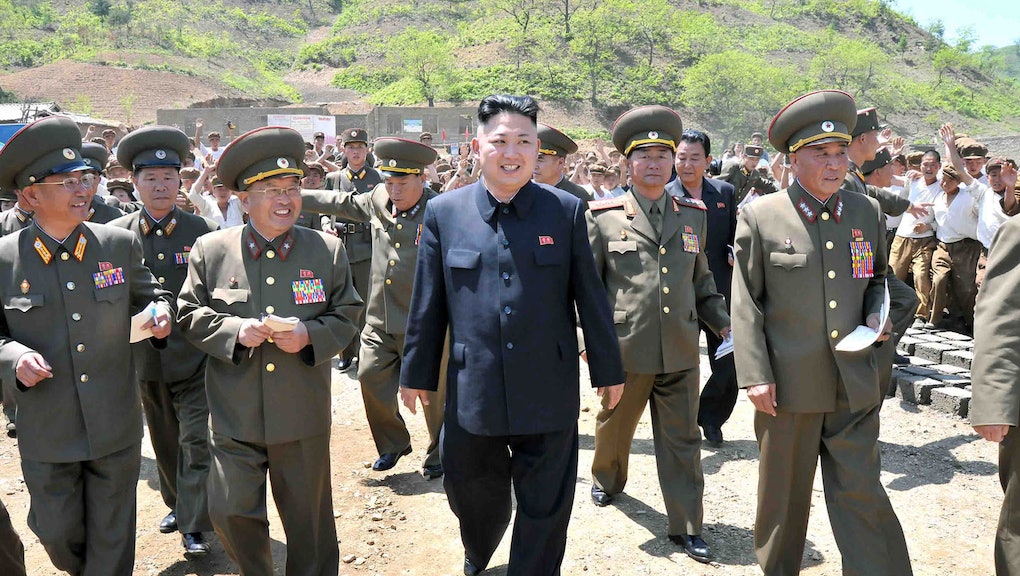 The news: You really don't want to screw with North Korean Supreme Leader Kim Jong-un, who might be the most vicious leader in the world today. Faced with numerous choices on how to run the country, he decided the best way forward was an execution rampage.

Kim's brutal purges started with the deputy defense minister, who was destroyed by mortar rounds. He had his ex-girlfriend and most of an orchestra cut down by machine guns. And recently Kim had his uncle, Jang Song-Thaek, killed for being a threat to his power. Some sources even reported that Kim had his uncle and co-conspirators ripped to shreds by a pack of 200 starving dogs.

Too bad that was actually a joke. Jang is most certainly dead, but by machine gun, not angry dogs.

How it started: Last week, news organizations went (in Gawker's own words) "apeshit" over a story that Jang and five colleagues had been tied to posts and allowed to be consumed by a pack of specially-starved canines. It was the kind of story that every media outlet loves — gruesome, about a well-known international celebrity (Kim), that played into both the stereotypes and mystery of the despotic North Korean regime.

But Chicago-based software engineer Trevor Powell wrote that the post had originally stemmed from a Chinese satirist, Pyongyang Choi Seongho, whose Tencent Weibo account often made fun of North Korea. The original joke can be found below:

That story was reported nearly verbatim by Chinese pro-government website Wen Wei Po, a notorious tabloid, and made the jump to English-language Hong Kong expatriate newspaper the Straits Times. Wen Wei Po is well-known as Hong Kong's equivalent of the National Enquirer, so it's a little surprising that Western sources took it seriously due to its "pro-government" leanings. (Out of Hong Kong's 21 newspapers, which are already viewed as very untrustworthy by the public, Wen Wei Po ranked 19 out of 21 in credibility at 4.89/10.)

The bottom line: The next time a Chinese newspaper declares that a Western newspaper (actually The Onion) has declared Kim Jong-un "the sexiest man alive," maybe you shouldn't laugh so hard at their expense.

Also, Kim has people killed with machine guns like all the time. But maybe we gave him some new ideas.