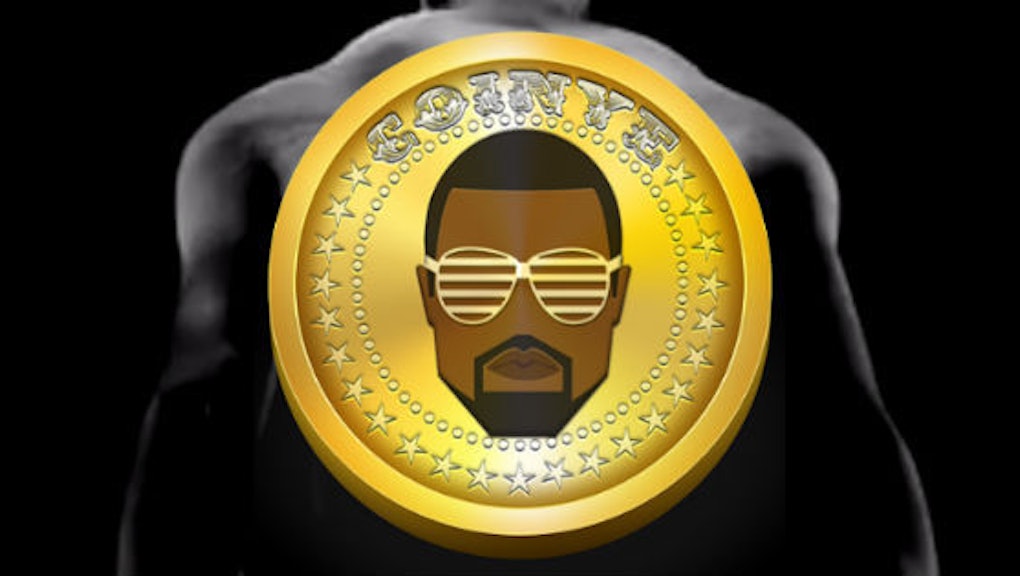 Kanye West is Angry At 7 Hackers Who Built a Bitcoin Knockoff. Here's Why.

The news: Dogecoin is no longer the funniest crypto-currency on the block. Enter Coinye West, a new Bitcoin clone being challenged by rapper Kanye West himself as an illegal appropriation of his copyright-protected image.

After the crypto-currency "went from chatroom joke to internet sensation" last week when seven anonymous programmers announced they would make Coinye a reality , West's lawyers got involved.

"Given Mr. West's wide-ranging entrepreneurial accomplishments, consumers are likely to mistakenly believe that Mr. West is the source of your services," wrote Brad Rose, a lawyer at Pryor Cashman LLP, in an open cease-and-desist letter directed towards the programmers.

The letter also demanded that Coinye hand over the Facebook and Twitter accounts associated with the currency, as well as their website. It said that if Coinye went forward, West's legal team would "notify the cryptocurrency community at large of your infringing actions and pursue all legal remedies against any business that accepts the purported COINYE WEST currency."

But Coinye said "too bad." As happens regularly on the internet, the so-called Streisand Effect (where attempts to suppress internet activity with threats of legal action backfire) went into full motion, and the emboldened designers of Coinye decided to launch the product immediately:

The choice to continue is surprisingly bold, seeing as Coinye's creators have already admitted to Vice's "Noisey" blog, "We hope he loves it, but if he doesn't, he really isn't someone we want to piss off."

They added, "We'd love if Kanye named dropped Coinye. I think he's gonna love that there's a CURRENCY named in his honor." Whoops. That overly optimistic prediction and subsequent rebuke by Ye's legal team may be why Coinye now looks like this:

(And in case you forgot, here's where the fish thing came from. It's less than flattering.)