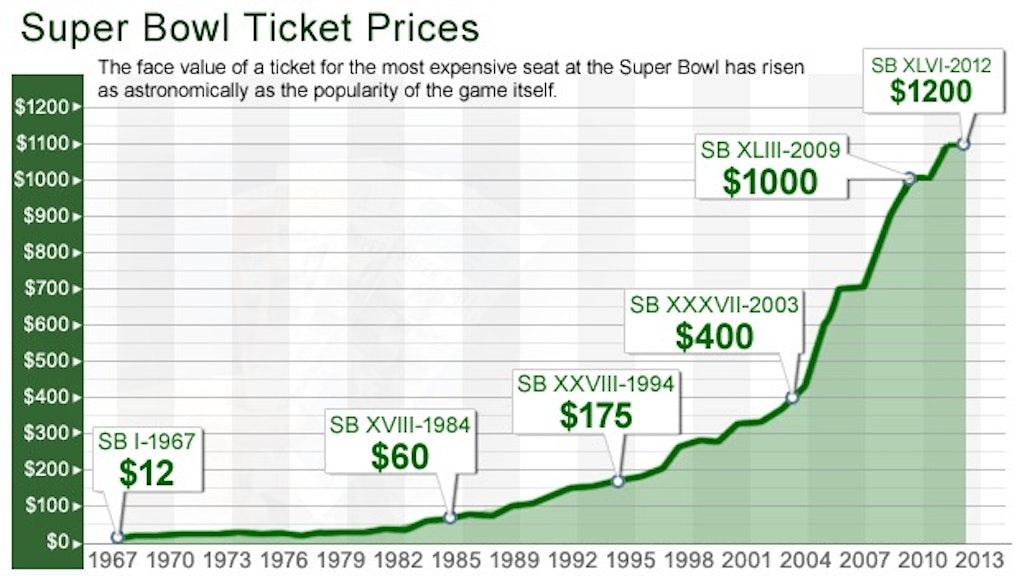 The news: Josh Finkelman is sick of exorbitant ticket prices for the Super Bowl, and he has decided to do something about it. The New Jersey resident has filed a class-action lawsuit against the National Football League (NFL), calling its Super Bowl ticket practice illegal.

Apparently, $2,000 for a ticket to the big game is just a tad too much to swallow.

According to Finkelman and his lawyer, the NFL only makes 1% of Super Bowl tickets available to the public, which, they argue, is a violation of the New Jersey Consumer Fraud Act— the law requires 95% of a product to be made available to the general public. By only releasing a small percentage of tickets to fans through primary sale, the NFL creates a secondary ticket market that leads to ludicrous prices.

He has a point. The price of a Super Bowl ticket has been increasing rapidly over the years, with a sharp uptick in the past decade. The most expensive ticket in 2012 cost three times what it did in 2003. Check it out, courtesy of CBS and the Associated Press:

And for this year's Super Bowl at the Metlife Stadium in New Jersey, tickets are going to cost even more: the most expensive ticket is anticipated to cost around $2,600. But don't worry, the NFL says 40% of tickets to the game will cost less than $1,000. Phew. Here I thought I'd have to sell a kidney to buy a Super Bowl ticket. But less than $1,000? A veritable bargain.

Will the lawsuit change anything? Honestly, probably not. As expensive as Super Bowl tickets are, I can't imagine prices coming down anytime soon. As the league says, the majority of tickets are given to teams to distribute, and any secondary sales — where the truly insane prices pop up — aren't in their control.

The lawsuit is seeking millions of dollars in damages, but Finkelman is more candid: "I'm hoping the NFL will change the policy," he told the New York Daily News.

I wouldn't hold your breath, Josh. You're better off just enjoying the two Super Bowl tickets you bought for $4,000 — and praying that it's a good game.