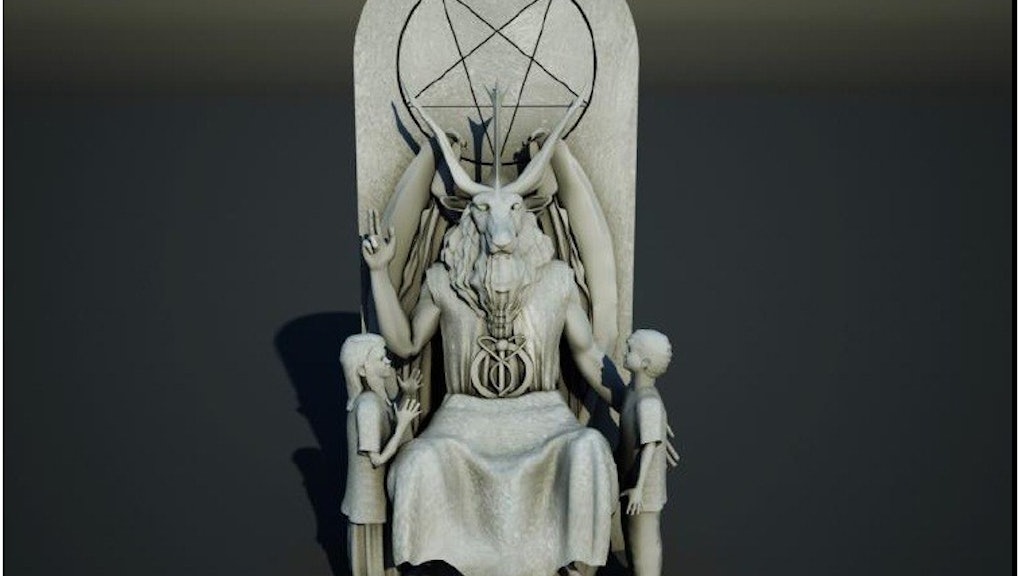 The news: Hail Satan! The New York City-based Satanic Temple has unveiled their design for the monument that worshippers of the Dark One everywhere hope will soon grace the Oklahoma Statehouse.

It's got everything your Lucifer devotee could want. It's a 7-foot-tall stone carving of Baphomet, a prominent demonic member of the hierarchy of hell, with a gigantic pentagram. The unholy throne is flanked on either side by two smiling children, whose parents presumably haven't told them not to speak with strange goat-headed monstrosities from the underworld. And the finished design will include quotes from Lord Byron and William Blake.

However, it will not be covered in dogs' blood or be the site of any virgin sacrifices.

"The monument has been designed to reflect the views of Satanists in Oklahoma City and beyond. The statue will serve as a beacon calling for compassion and empathy among all living creatures. The statue will also have a functional purpose as a chair where people of all ages may sit on the lap of Satan for inspiration and contemplation," said spokesman Lucien Greaves, who of course is named that.

The conservative Oklahoma Legislature is currently fighting a lawsuit from the American Civil Liberties Union, which contests that the legislature's decision to place a Ten Commandments monument on the north steps of the statehouse in 2012 was unconstitutional. Other groups such as a Nevada Hindu leader, an animal rights organization, and the Church of the Flying Spaghetti Monster have additionally argued that if the legislature's decision to place a Christian monument on public property was constitutional, then there is no legal barrier to placing similar monuments advocating their beliefs there as well.

For the duration of the lawsuit, the Oklahoma Capitol Preservation Commission has placed a moriatorium on new monuments. "Anybody can still make their request, but we'll hold off on considering them until the lawsuit is adjudicated," said its commissioner, Trait Thompson.

Oklahoma legislators are stumbling over themselves to express the most outrage. Here's a sample:

Rep. Don Armes (R-Faxon): "I think you've got to remember where you are. This is Oklahoma, the middle of the Heartland. I think we need to be tolerant of people who think different than us, but this is Oklahoma, and that's not going to fly here."

Rep. Earl Sears (R-Bartlesville): "This is a faith-based nation and a faith-based state. I think it is very offensive they would contemplate or even have this kind of conversation." The monument is ... "An insult to the good people of the state. I do not see Satanism as a religion, and they have no place at the state Capitol."

They have a point ... kind of. The Satanic Temple is a real religious organization, but it's a non-supernatural one that takes the literary Satan as an inspiration for a codified way of life.

In a previous interview, Greaves told VICE that the original founders of the Satanic Temple "envisioned it more as a 'poison pill' in the church/state debate. The idea was that Satanists, asserting their rights and privileges where religious agendas have been successful in imposing themselves upon public affairs, could serve as a poignant reminder that such privileges are for everybody."

The ACLU is taking a different approach. "Our position is we'd like to see the government get out of the religious monument business altogether," said their Oklahoma legal director, Brady Henderson. "Our feeling is, more religious display doesn't solve the fundamental problem that the government is wading into the religious realm."