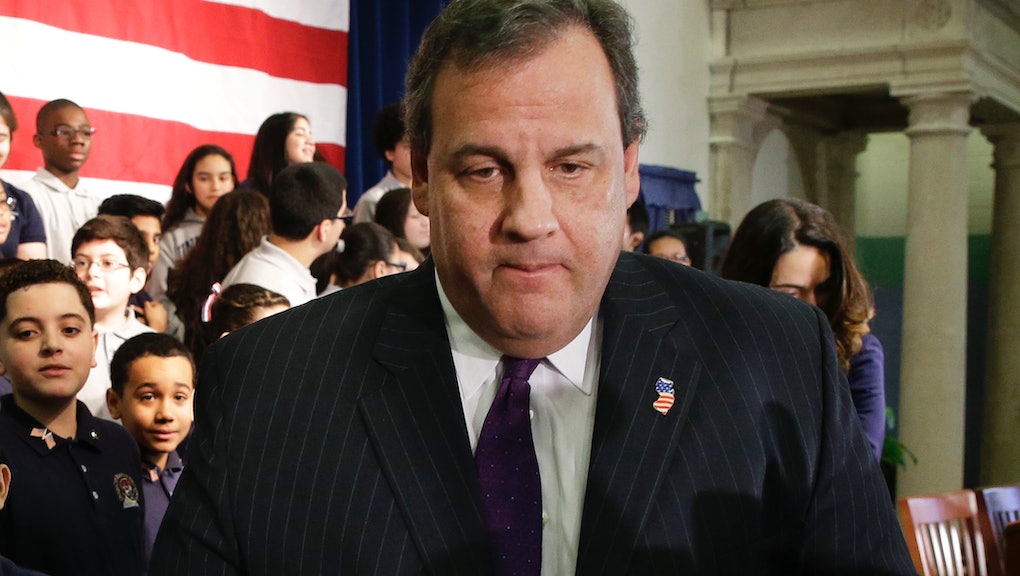 The Wild Scandal That is Rocking Chris Christie, New Jersey, and the 2016 Elections

The news: New Jersey Governor Chris Christie seems to have embroiled himself in a huge scandal involving the George Washington Bridge, his 2013 re-election campaign, and a vindictive senior aide.

Documents released by Bergen County's The Record show that after Fort Lee Mayor Mark Sokolich, a Democrat, failed to endorse Christie during his re-election campaign, senior deputy Bridget Anne Kelly ordered Christie-affiliated officials at the Port Authority to retaliate. And retaliate they did, shutting down two out of three lanes on the George Washington Bridge from Fort Lee to New York City (the world's busiest motor vehicle crossing) for four days in September. Sokolich suspected he was being blackballed when Port Authority officials rebuffed his desperate calls for answers.

The lanes were only re-opened when officials with New York Governor Andrew Cuomo angrily ordered a stop to the closures, which endangered lives by backing up emergency personnel and turned Fort Lee into an unending traffic nightmare. Christie later blatantly lied about the closures, insisting they were part of a traffic study that never existed. He mocked reporters who suggested otherwise. With The Record's release of internal emails, it seems nearly beyond dispute that numerous top-level Christie officials used their powers for abusive, political payback.

The background: While we've long known that Christie has a vindictive side and a temper — and "frankly, that’s what a whole lot of Republicans like about him" — the conventional political wisdom has largely considered it as just part of his independent streak, the same one that allowed him to buck Republican wisdom and do things like tour with President Barack Obama after Superstorm Sandy wrecked the state. But while it's gotten him into minor squabbles like screaming matches with teachers, it's never gotten him into serious trouble ... until now.

"Time for some traffic problems in Fort Lee," Kelly wrote in an email on Aug. 13, three weeks before the closures, to David Wildstein, one of Christie's top executives at the Port Authority. "Got it," he responded. Many other Christie officials were either mentioned or copied in the email chains, including Port Authority chairman David Samson, Christie re-election campaign manager (and now state GOP chairman) Bill Stepien, and spokesman Michael Drewniak.

The stupidest, most pig-headed part of the whole scandal is that Christie was already on the way to easily winning re-election with 60.30% of the vote, making this more an exercise in thuggishness and temperament than anything that could have affected election results. As The Los Angeles Times's Robert Abcarian sarcastically noted, "The only thing worse than a sore loser is a sore winner."

The bottom line: There's two possibilities. The first is that Christie issued a direct order to use state resources to strike at a political opponent, a move that is almost comically villainous. The second is that he simply doesn't know how to keep house and created an atmosphere in which these ridiculous abuses of power could proliferate. Either would be a devastating liability to any presidential ambitions he has for 2016 or beyond.

And where there's smoke, there's fire. What else does Christie have smoldering in his closet?

In a statement released late on Wednesday, Christie said, "What I've seen today for the first time is unacceptable. I am outraged and deeply saddened to learn that not only was I misled by a member of my staff, but this completely inappropriate and unsanctioned conduct was made without my knowledge."

But the buck should stop with Christie. Christie was eliminated as a potential vice presidential nominee for the Mitt Romney campaign in 2012 because, according to Mark Halperin and John Heilemann, the vetting staff was "stunned by the garish controversies lurking in the shadows of his record."

Christie's national ambitions have always been hampered by his brash attitude and disconnect from the rest of the Republican Party, which is much more conservative than he is. Christie's sent hugely mixed messages on gun control and accepted Medicaid expansion with Obamacare in his state, along with a multitude of other cultural and policy differences with national GOP primary voters. As New York Magazine's Jonathan Chait put it in 2012, a "Republican painting Christie as a philosophical and cultural alien would have a very, very easy case to make."

With this latest scandal, why would any Republican bother voting for Christie in a 2016 primary?