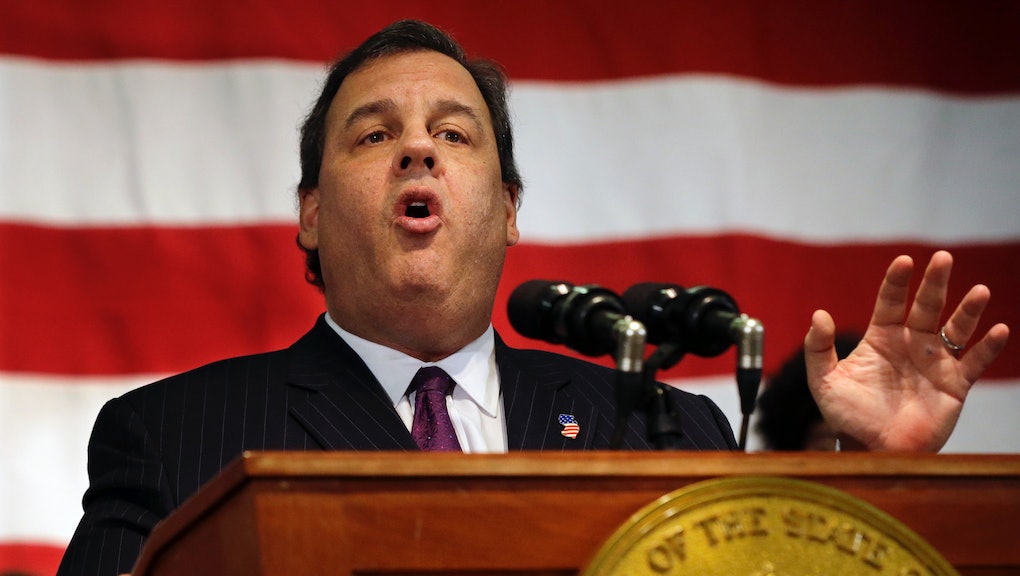 Chris Christie Just Did Something With Big 2016 Implications, But It's Not What You Think

We used to have such short campaign seasons, with opening salvos coming the morning after the midterms. But perhaps two years is too short a time for full maneuvers, and so on Jan. 7, the next presidential election began in New Jersey with Governor Chris Christie signing the state's DREAM Act into law.

Or rather, re-signing the DREAM Act. The governor signed the original legislation — which, among other things, allows the children of undocumented immigrants to pay in-state tuition at New Jersey's colleges and universities — last month. Christie's far more public signing ceremony this Tuesday (made on a reproduction of the bill, at a desk surrounded by Democratic lawmakers, and with the press in full attendance) was pure political theater.

After coming closer than he ever admitted in 2012, it looks like somebody is finally running for president.

Christie's endorsement of the New Jersey law comes as part of a broader GOP effort to woo Latinos ahead of the 2014 and 2016 elections. After struggling to connect with the ascendant voting block for a generation, Hispanic Republicans have found themselves thrust suddenly before the cameras, while behind the scenes, House Speaker John Boehner reshuffled his staff to include an expert on immigration policy.

So long to the days of "complete the danged fence." The new, "Latino-friendly" GOP has arrived. It's a matter of survival. Univision CEO Randy Falco told Mitt Romney way back in 2011, "If you don't start paying attention to our community, there won't be a Republican Party in 10 to 15 years."

Mr. Self-Deportation ignored that warning, and lost by more than 2 to 1 among Latinos in 2012. Christie, it seems, isn't going to make the same mistake.

Of course, even if the GOP makes inroads with Latinos, Latinos won't be making any inroads into GOP primaries. Conventional wisdom says the Democrats should fear Christie the same way they feared Jon Huntsman. He'd be menacing in the general election, but the Republican base is too short-sighted to nominate him. A fast-talking Northeasterner who embraced President Obama the week before an election and can't even be bothered to get born again winning South Carolina? Please. The extremists will give us Ryan/Rubio 2016, and Clinton will waltz her way into the White House.

Well, not so fast.

You don't win a lopsided, 60% to 38% gubernatorial re-election campaign as a Republican in a state President Obama carried by 18 points without some serious political savvy. Christie and his handlers know, for example, that despite the perennial media narrative about an unreasonably stubborn GOP electorate, Republican primary voters tend to bite the bullet and nominate the guy they think can win. In the end, Mike Huckabee, Newt Gingrich, and Rick Santorum did not receive their party's nomination.

Moreover, they know the 2016 field is going to be packed with paleoconservatives (Rand Paul, anybody?) who will be splitting the support of hardliners who think Christie is a RINO. The governor doesn't need 51% of GOP voters — he just needs more than all the other guys. Sure, he could try to prevent another Santorum-style insurgency and lurch rightward ahead of the primaries, but then, he's also seen the downside of a self-inflicted "severely conservative" tag once the general election rolls around.

But there's something more fundamental than all of that in Christie's calculations, something that comes from a lesson he learned in appealing to New Jersey's Democrats — and particularly its Latinos — last year. As Business Insider reported,

"How has Christie overcome Republicans' demographic problem? When we asked Union City rally attendees why they back Christie, they rarely cited policy specifics … they appreciate his ability to forge bipartisan compromises... Edgar Mirbex, Democrat from Ecuador … explained his support for Christie simply: 'I like him.' Asked if he likes specific Christie policies, he said, 'I don't remember exactly.'"

Politics is theater, and the larger the audience, the more sentiment takes the place of substance. Voters form impressions of politicians, and once those impressions solidify, it's difficult for anyone to shake them: Attacks that run against the settled narrative of a candidate tend to bounce off as voters' natural confirmation bias rejects contradictory information. That's why defining oneself is so important. If you don't, your opponents will do it for you.

Christie knows that his greatest asset is the perception that he's a straight-talker, not beholden to party orthodoxy, and willing to reach across the aisle to do what he says he'll do. Passing the New Jersey DREAM Act, like touring the Hurricane Sandy damage with President Obama before it, are designed to cement that image, something vital to any hope the governor has of becoming president. Without the Mr. Straightalk image, he's just a petty, mendacious bully covering up his history of shutting down vital commuter bridges out of spite. With it, even scandals like that aren't going to do much to shake his profile in the voters' eyes.

With Latinos, and in general, the GOP has an "image problem." Christie doesn't, and isn't, going to do anything to change that.

There's a risk in that, of course. Maybe his primary opponents will savage him so thoroughly on amnesty that he'll lose the nomination. Maybe Democrats will succeed in swift-boating his candor into phoniness. But politics always entails risk, and it'd be a mistake to imagine Christie doesn't know how to calculate them.