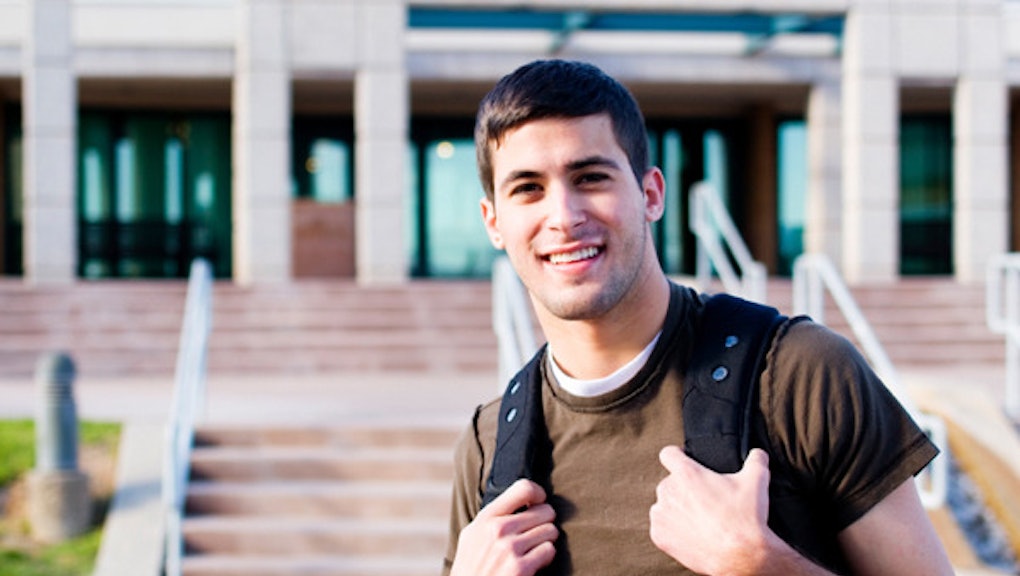 As one of the "liberal professors" alluded to in the following email from JPMorgan executive Michael Cembalest to the company's clients, it may seem ironic for me to compose the introduction to this article. That said, at a time when too many millennials feel overwhelmed by the challenges of Great Recession life, there is undeniable merit to the suggestions in this list. Some of it is tough advice that many of you won't want to hear, but then again, good advice is often like good medicine — worth taking, but a bit hard to swallow.

Congratulations on getting to this point.  Here are some thoughts about the next stage of your life that are best illustrated with some simple charts and data.

That’s Latin for “be suspicious of everything.” For a variety of reasons, your college professors are likely to overwhelmingly skew to one political party, and to a degree that is vastly different from the balance in the world you will graduate into four years from now (see table). Regardless of your political leanings, this will be something to think about. It will be up to you to do your own critical reasoning, to avoid coming to decisions simply based on the crowd, and to think about any ideological rigidities that may result from the status quo.

As for your introductory course professors, it might not matter if they are on a tenure track or not.  A recent study from Northwestern University [a] measured whether tenure or non-tenure line professors contribute more to student learning, after controlling for student-specific differences. “Lasting student learning” was measured by grades in subsequent classes in the same subject. Here’s what they found: non-tenure track faculty encouraged students to take more classes in a given subject than tenure line professors, and also led students to achieve higher grades in subsequent coursework.

[2] You should get better grades than I did

In Garrison Keillor’s Lake Wobegon, “the women are strong, the men are good-looking and all the children are above average”. Regarding US private and public universities, Keillor got the last part right.  As shown below, the mean grade point average at US private and public schools has been increasing at a steady pace since 1970. Soon, colleges will have to “turn the dial up to 11” or else everyone will have the maximum GPA.  As per the study from which the data is sourced, the 1960’s jump took place when the purpose of a GPA changed from being a motivator for students to being a measure used for external evaluation. GPA increases since 1970 are seen as a by-product of student evaluations of teachers (i.e., tough-grading teachers get bad evaluations, and eventually become extinct). Humanities courses have seen the highest grade inflation. Lower grades in science and engineering apparently discourage some students from pursuing them; do not let that affect you.

If it seems like people put too much importance on GPA, I would agree. What you learn is more important than what grades you get. However, you should also be aware of the realities of the job market.  In the National Association of Colleges and Employers’ Job Outlook 2013 Survey, GPA importance hit an all-time high: 78% of employers screen candidates based on grade point averages.

[3] Try and get enough sleep

This sounds straightforward, but it’s worth documenting. There are clear patterns regarding the relationship between GPA and getting enough sleep (shown below as the number of days per week with less than 5 hours of sleep, and the average hours of sleep per night). Sleep is a much more reliable and less dangerous way of helping to keep your grades up than resorting to unprescribed Adderall or other “study drugs” that college students are reportedly using in greater numbers.

[4] I hope you get a roommate who does not drink too much; moderation matters

College males assigned to roommates who drink frequently had lower GPAs than those assigned to non-drinking roommates, as per a study from Harvard and Mathematica Policy Research [b]. To illustrate the point, an average student’s GPA is not influenced by a roommate’s high school grades, SATs, or family background; but is influenced by roommate drinking habits. And of course, heavier drinking causes well-documented reductions in academic performance, particularly for higher-performing students.

The best research I have seen on the subject synthesizes both prior topics. There’s a feedback loop in which alcohol disturbs sleeping patterns and increases daytime drowsiness such that both factors negatively impact grades [c]. The study was based on drinking habits, sleep patterns and GPA at a Northeastern liberal arts university with an average math + verbal SAT score of 1260. Their findings: the average college student has around 5 drinks on a weekend night (for the record, that’s around 2 more than I had).  For every additional drink beyond that, GPAs declined by 0.17 points, and the impact of that extra drink on sleeping patterns subtracted another 0.07 points for a total GPA reduction of 0.24 (out of a 4.0 scale, that’s a lot). Have a good time but keep it under control.

[5] Life after college: be prepared for technology to continue changing the job landscape

There’s plenty of data on unemployment rates and salaries by undergraduate major; I have shown those to you before [d] (the majors with the lowest unemployment rates and highest salaries: computer, chemical, electrical, civil and mechanical engineering; math/physics; and economics. Drama and film majors are a recipe for living at home). A more important long-run issue to think about may be how technology affects your career. Researchers at Oxford just published an analysis assessing what jobs might be computerized in the future. Their conclusion: a staggering 47% of the US workforce, spanning a range of career types. There are vigorous debates about outsourcing, but increasingly, computerization may grow as a factor affecting employment conditions.

In The Man in the White Suit, Alec Guinness invents a suit that never has to be cleaned or replaced. London’s tailors and dry cleaners angrily chase him down in the street to destroy his invention. They are relieved when the suit finally starts to unravel, since the fiber’s design is flawed.  Productivity improvements are great things, but there might be a point at which too much power shifts to capital over labor. Anyway, when you think about a career, remember that in some professions, eventually a computer might be able to do it too, or reduce the economic value of you doing it (e.g., the impact of the internet on print journalism).

[6] The fiscal debates of your post-graduation future

After you graduate, the US will be in the thick of the “generational theft” issue; here’s a heads-up on what this is all about. Generational accounting is an estimate of who benefits from and who pays for government programs. As shown in the first chart, the average person in the generation that turned 65 this year received $327 thousand dollars more in lifetime government benefits than they paid in Federal taxes. On the other hand, children born in the future (e.g., yours) will have a lifetime deficit on this basis of -$421 thousand dollars. If it sounds unfair, it is.

The 2nd chart is another take on this. The Federal government spends on discretionary items like infrastructure (roads, bridges, tunnels, electricity), the judiciary, pollution control, energy research & development, worker retraining, disease control and general science. The government also spends on entitlements (Social Security and Medicare). The “discretionary spending to entitlement” ratio used to be 1:1, is now 2.5:1 and is projected by Congress to be 4:1 in 2020 as discretionary spending falls to the lowest level in 40 years. In utopias, governments spend money on everything people want without worrying about how to pay for it.  In reality, choices are made. Be aware that such issues are often more complicated than how they are presented on TV. OK, enough of that.

You need to get some exercise: 85% of adults continue the same exercise patterns they establish during their senior year of college, and ~40% of college students exercise regularly (≥3 days per week).  Aside from the associated health benefits, exercise goes hand in hand with better grades. The causal effects are unclear, but in one study, students with a GPA of 3.5 or higher were three times more likely to exercise than those with lower grades [e].

If you go to a gym, the elliptical trainer is your best choice. Compared to a treadmill and stationary bike, an elliptical trainer activates more muscle groups simultaneously, and as shown in the chart, to a greater degree (the bars show excess muscle activity of the elliptical over the treadmill and bike). Also: less joint strain than the treadmill. What should you listen to while exercising? See the last section on the next page.

[8] Bring those classic rock and R&B playlists with you

I arrived at college in 1980 (the inception of a decade-long musical graveyard) when many people turned off the radio and instead listened to classic rock and rhythm & blues produced from 1965 to 1978. I notice you like this music as well. Now you can substantiate to today’s generation why that era’s music was objectively “better”.

The Million Song Dataset is a database of western popular music produced from 1955 to 2010. As described in Scientific Reports(affiliated with the publication Scientific American), researchers developed algorithms to see what has changed over time, focusing on three variables: timbre, pitch and loudness. Timbre is a proxy for texture and tone quality, terms which reflect the variety and richness of a given sound. Higher levels of timbre most often result from diverse instrumentation (more than one instrument playing the same note). Pitch refers to the tonal structure of a song: how the chords progress, and the diversity of transitions between chords.  Since the 1960’s, timbral variety has been steadily declining, and chord transitions have become narrower and more predictable.

The researchers also found that popular music has gotten a lot louder. The median recorded loudness value of songs by year is shown in the second chart. One illustrative example: in 2008, Metallica fans complained that the Guitar Hero version of its recent album sounded better than it did on CD. As reported in Rolling Stone, the CD version was re-mastered at too high a decibel level, part of the Loudness Wars affecting popular music.

Overall, the researchers concluded that there has been a “progressive homogenization of the musical discourse”, a process which has resulted in music becoming blander and louder. This might seem like a reactionary point of view for an adult to write, but the data does seem to back me up on this. All of that being said, I do like that Method Man-Mary J. Blige duet.

Have a great time at college. Whether you become a mathematician or drummer, I know you’ll be a great one.

[c] “Alcohol Consumption, Sleep, and Academic Performance Among College Students”, Journal of Studies on Alcohol and Drugs, Singleton and Wolfson, May 2009.

[d] “Hard Times: College Majors, Unemployment and Earnings: Not All College Degrees are Created Equal”, Georgetown Center on Education and the Workforce, January 2012.