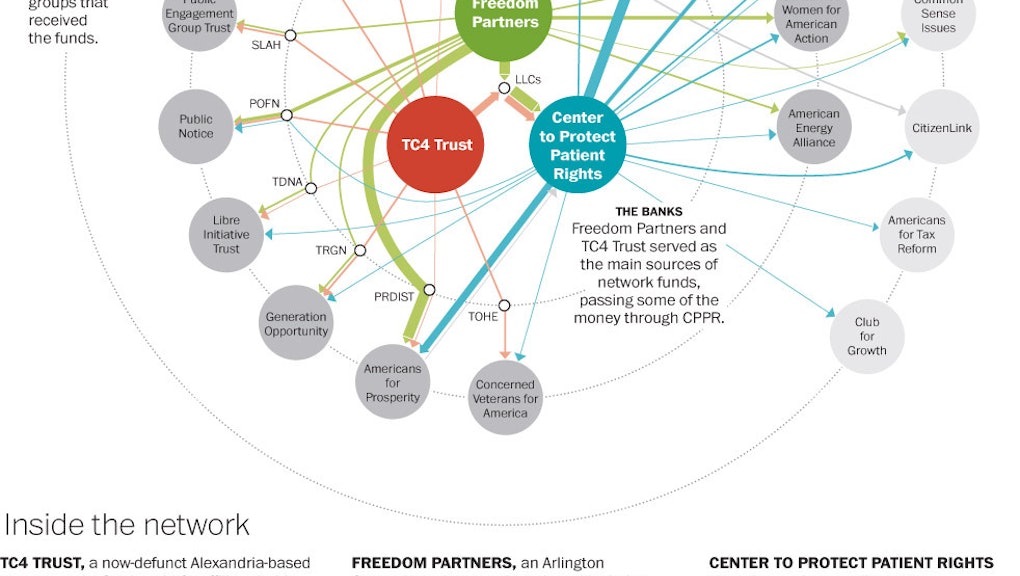 We all know that Charles and David Koch have their hands in all things Republican, but did you know it went this far?

An amazing graphic by The Washington Post has mapped all of the organizations that are directly and indirectly funded by a political network set up by the conservative brothers, and it's either terrifying or really impressive (or both), depending on your perspective.

While we know exactly where the money is going, the funders remain almost completely anonymous. The network operates outside the campaign finance system, using a complicated system of tax-exempt groups and limited-liability companies to shield the network's financiers from disclosure requirements.

So how far is their reach, exactly? Take a look at the graphic:

The money and reach of this organization are completely unique in American politics. Filings show that the network backed by the Kochs and their donors outspent all other independent conservative groups in 2012, and it even matched the spending of the national coalition of labor unions. The difference between the Kochs' network and the labor unions, however, is that labor unions aren't nearly this sneaky with the source of their political donations.

According to an analysis of tax returns by the Post and the Center for Responsive Politics, the 17 conservative groups you see above have pretty deep pockets. In 2012, they raised at least $407 million and funneled it to conservative campaigns across the nation. This surpasses even Karl Rove's super PAC, American Crossroads, which raised a comparatively paltry $325 million.

Because the donors are unknown, it's unclear how much money comes directly from the pockets of the Koch brothers and how much comes from outside sources. But we do know where it is going.

Most of the money flows through two non-profits that essentially function as banks that feed the money to other conservative organizations. The biggest of these faux banks is the Freedom Partners Chamber of Commerce, which brought in nearly $256 million in its first year alone according to WaPo. Because Freedom Partners is structured as a business league, the majority of that money came from "dues" paid by its 200-ish members, and these members only have to disclose their affiliation if they feel like it.

Freedom Partners and TC4 Trust — a similar organization that is now defunct — funneled most of their funds to national conservative organizations. They left some funds to run through yet another intermediary, the Center to Protect Patient Rights, which then spread the money around to even more organizations on the right.

Essentially, this is an (evil?) genius scheme that allows anyone to make massive anonymous political donations as long as they are OK with not picking the specific conservative organization that receives their money — and it's completely legal.