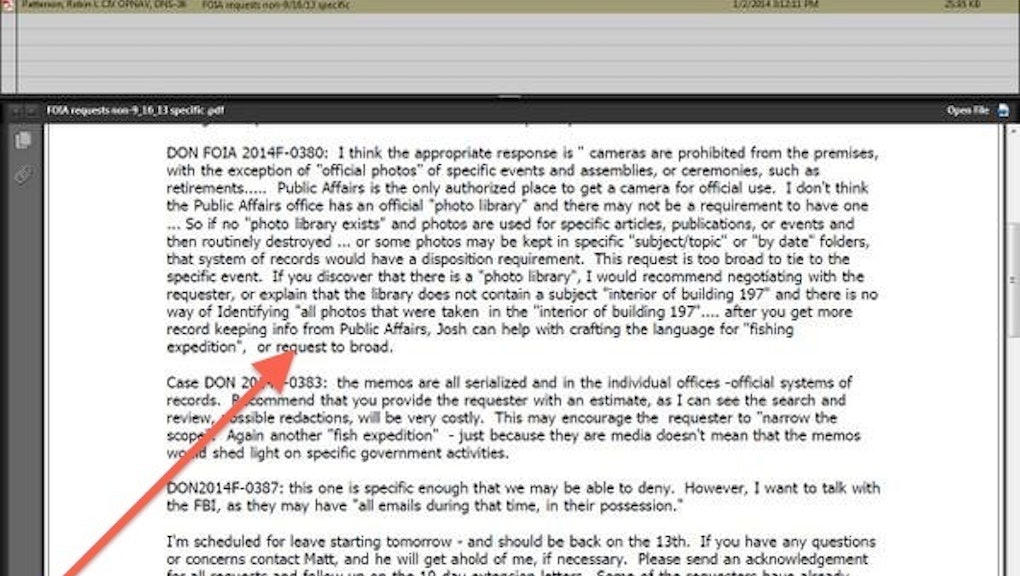 The news: The Navy messed up big time last week, sending a reporter their strategy memo for dismissing his Freedom of Information Act (FOIA) request by accident. Now it's apologizing.

Washington reporter Scott MacFarlane had requested access to memos drafted by Naval Sea Systems Command after the Navy Yard shooting on Sept. 16, in which a deranged gunman killed 12 people. The Navy didn't want to release the materials, so it settled on a strategy to keep the reporter from digging further. The only problem was that someone accidentally forwarded the emails outlining their plan to MacFarlane himself.

“Recommend that you provide the requester with an estimate, as I can see the search and review, possible redactions, will be very costly,” she wrote on Jan. 2. “This may encourage the requester to 'narrow the scope.' Again another 'fishing expedition' — just because they are media doesn't mean that the memos would shed light on specific government activities.”

She even went through the requests individually, providing reasons to deny each one:

DON2014F-0387: this one is specific enough that we may be able to deny. However, I want to talk with the FBI, as they may have all emails during that time, in their possession.

MacFarlane was amused and angry.

The Navy then apologized:

Disheartening, to say the least.

The takeaway: While the FOIA process is supposed to work in favor of openness, it's clear that the Navy, at least, views releasing documents as something to be fought against using the means at their disposal.

Ginger McCall, federal policy manager at the Sunlight Foundation, says in theory that FOIA requests should increase the openness of the federal government. But "As a FOIA practitioner I had always suspected that this sort of thing may be happening in FOIA offices but it was disappointing to have that confirmed," she commented.