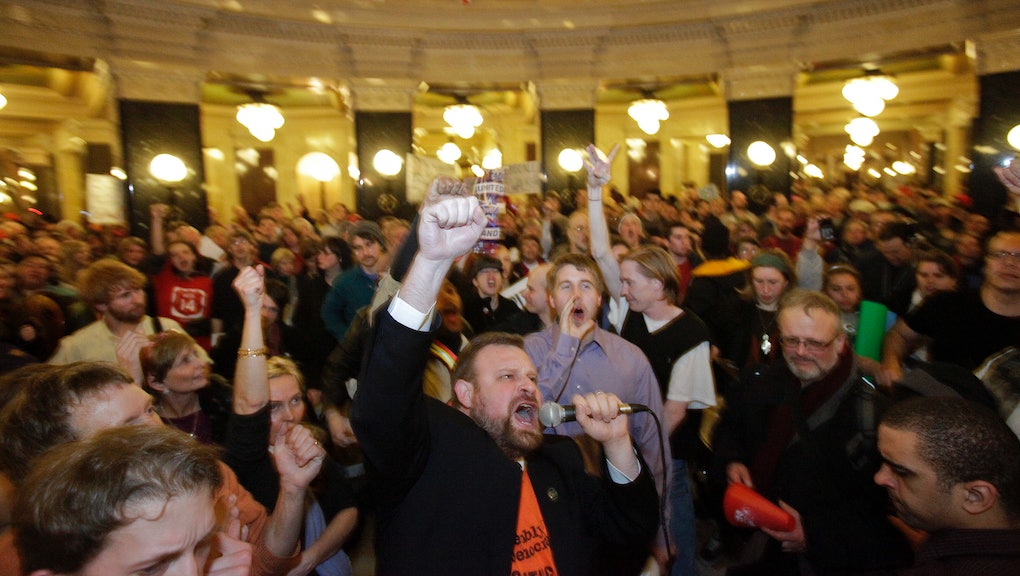 The modern American economy is the product of various labor movements across history. These images, from 1892 to the present, show both the universality of American labor strikes and the progress made up to this point in time. The narrative has everything to do with the shifting balance of power.

The struggled resulted in a heavy loss by the union side.

Between September 1913 and December 1914, coal miners in southern Colorado left company towns above Trinidad and Walsenburg to strike against the Colorado Fuel and Iron Company for ignoring established mine safety laws.

However, on April 20, 1914, the Colorado National Guard and Colorado Fuel & Iron Company camp guards on a tent colony of 1,200 striking coal miners and their families at Ludlow, Colorado. The resulting violence, now known as the Ludlow Massacre, killed about two dozen people, and effectively broke the strike.

Held in the wake of World War I, this strike saw a weakened Amalgamated Association of Iron, Steel and Tin Workers (AA) attempt to organize the United States' steel industry amidst an environment where rising technological innovation in the factories led to massive cuts in labor opportunities.

Also known as the 1922 Railway Shopmen's Strike, the immediate cause of this strike was the Railroad Labor Board's announcement that hourly wages would be cut by seven cents.

Launched on July 1, 1922, by seven of the 16 railroad labor organizations in existence at the time, the strike continued into the month of August before collapsing. Eleven people were killed.

The largest in U.S. labor history at the time, this strike by the textile worker's involved as many as half a million textile workers from New England, the mid-Atlantic states and the U.S. Southern states.

It lasted 22 days, when the series of strikes were violently broken by mill owners and local officials using private guards.

In February 2011, thousands of protestors crowded into the Wisconsin State Capitol to rally against the 2011 Wisconsin Act 10, which scraps the collective bargaining rights of public workers.

The protests failed to achieve their goals.

The strike resulted in an uneasy deal.

The protests resulted in hundreds of arrests, including a man in a Santa costume.

In December 2013, striking fast-food workers organized strikes and walkouts in nearly 60 American cities, hoping for super-size wage hikes that for many would boost their hourly pay to $15 from the current federal minimum $7.25.

The issue remains unresolved, but is expected to play a significant role in President Obama's upcoming State of the Union speech.