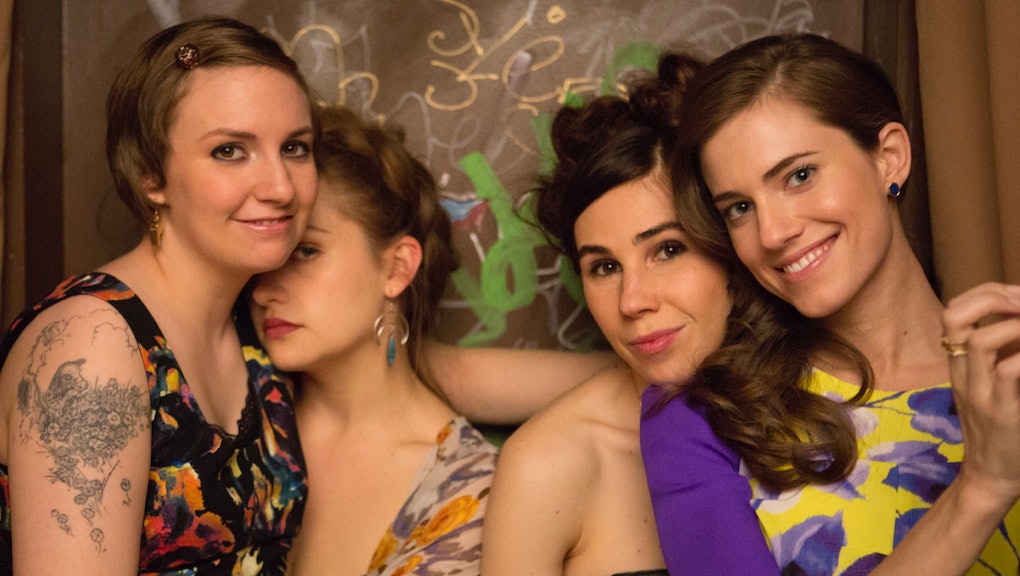 Girls is a show about growing up. Over the course of its two seasons, it's done some growing up of its own. But getting older, we know, is an ugly process, and, as the show has progressed, it's begun to shed its lighthearted comedic innocence and foray into far less becoming territory.

There are those who argue that the show has gotten too dark —that Hannah's lapse into OCD (let us not forget the Q-Tip, the haircut), Adam's alcoholism and sexist-asshole-ism, Marnie's various embarrassments, and all the other disasters that befell the characters in season two amounted to a smorgasbord of in-your-face excruciation and little else.

Will the show get lighter or darker in season three? Where exactly in its lunar phase will we find it? Whether Lena Dunham decides to steer her brainchild in the direction of the comedic or the depressing, the romantic or the revolting, we can only hope that the show will go deeper — that it will, like its characters, grow. Here are five things we hope happen in the upcoming season. (Mark your calendars: Sunday, Jan. 12, 10p.m., HBO.)

1. Adam gets a feminist education

Adam's brutishness and faux-sexism provided much of the comic relief of season one (a much-gif'd line: "Yo skank, where you at? Gettin' that pussy pounded?"), but his lack of regard for women reached a new level of severity in season two, particularly in the much-discussed sex scene (some say rape scene) with Natalia.

While it's unlikely that Adam can do a full 180 and still maintain integrity as a character, the show ought to do viewers (and Adam) the service of exploring his complex further. There's something in the tangle of Adam's personality — his clarity, his cruelty, his Thoreauvian self-reliance, his preoccupation with woodworking and other "masculine" arts — that gets at the paradox of contemporary 20-something manhood, and particularly the sort of educated hypermanliness you see in the stretches of Brooklyn in which Girls is set. How can a man be virulent and socially conscious? Girls can and should explore that question through his character.

When the depression plague descended upon the cast of Girls last season, Shoshanna was mostly spared. Yes, she had problems with Ray and did a very un-Shoshanna-like thing with a smooth-talking doorman, but season two simply didn't put her through the same hazing that left Hannah looking like one of The Monkees and Marnie making an idiot of herself at a Silicon Alley office party. In order to keep Shosh fresh and well developed, Girls will have to dump some new, messy, adult problems in her lap. It won't be pretty, but it's time Shoshanna carries her share of the darkness burden.

Elijah might be accurately described as Hannah's "gay friend," or her "gay ex-boyfriend," and that's precisely the problem with his character. While he's not nearly as limited and stereotypical as some gay characters on television (*cough* Modern Family *cough*), he has yet to transcend his satellite position in Hannah's universe and devil-on-shoulder shtick to become a full character in his own right. His bitchiness and silliness makes for comic gold; but hopefully in season three, he can display a broader emotional spectrum.

Many things look good on Marnie, but joblessness isn't one of them. In season one, when she was a prim gallery assistant with her shit together, she lent the show a stability and relief that it badly needed. In season two — the bulk of which of she spent bumbling around in Unemploymentland and pining after her ex-boyfriend Charlie — she became the show's most irritating character. Marnie's negative experiences, for all the wear and tear they did, failed to make her any more relatable as a human. We'd like to see Marnie find her way back to herself — and that journey likely will involve finding a new job.

The trailer for season three shows Hannah sitting in a therapist's office referring — in typical, aware-of-my-own-dramatics Horvath style — to the nervous breakdown that transpired in season two. This is promising.

Often, television shows that have taken a dark turn will begin a new season on an incongruously bright note (the fourth season of Downton Abbey is a recent example). It's a way of pulling the wool over viewers' eyes, of delivering an emotional shock without paying the narrative consequences. Whatever else may occur, season three of Girls will be an utter failure if it doesn't reckon directly with Hannah's breakdown — without a doubt one of the most nuanced and least varnished depictions of mental illness (however fleeting) on television in recent memory. We hope she recovers; but that recovery must be earned.