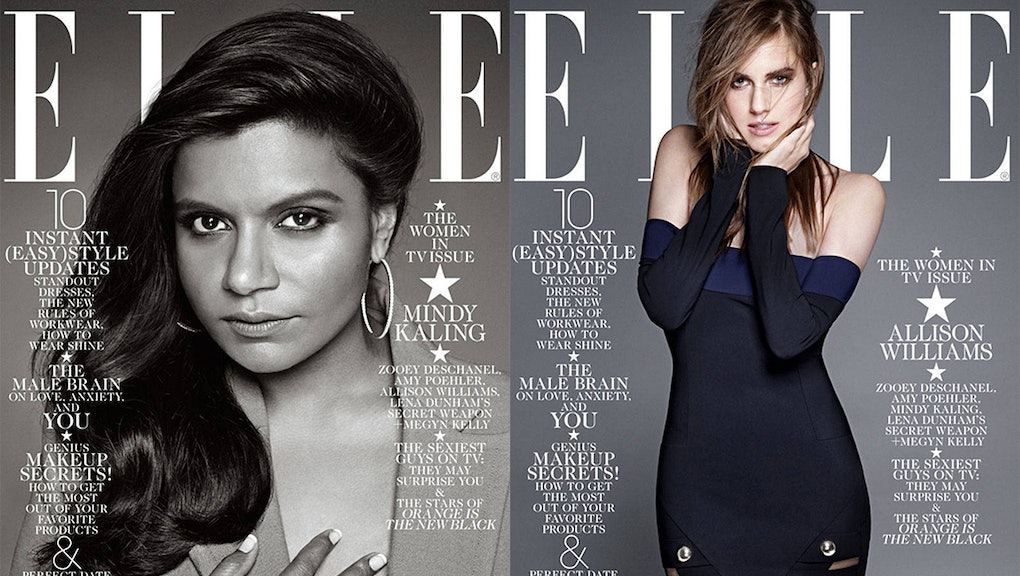 8 Magazine Covers Show a Very Different Side of Beauty

The February Elle "Women in TV" issue has made headlines this week, and not for its coverage of our favorite ladies of television: Its four-cover series featuring Amy Poehler, Zooey Deschanel, Allison Williams, and Mindy Kaling sparked controversy when readers noticed that Kaling was the only one to be rendered in a black-and-white, close-up shot.

Bloggers and the Twittersphere were quick to cry racism, fat-ism, and just-plain mean-ism: Why was the only woman of color, who has expressly stated she's a "normal American woman size," cropped and in black and white?

Elle stood by its cover, releasing a statement to E! News stating, "Mindy looks sexy, beautiful and chic. We think it is a striking and sophisticated cover and are thrilled to celebrate her in our Women in TV Issue." Kaling herself defended the editorial choice on Twitter.

In a strikingly similar incident, the magazine stirred up a "which one of these is not like the others" upset over its four-cover October 2010 issue, which featured full body shots of three white women — Amanda Seyfried, Megan Fox, and Lauren Conrad — plus a cropped close-up of one curvy, woman of color: Oscar-nominated Precious actress Gabby Sidibe.

Last November, Elle featured Melissa McCarthy on its cover in an oversize jacket that led many to feel her body was purposely being obscured. McCarthy defended the choice, dubbed "Jacketgate," saying she had picked the coat out herself.

But does it matter if Kaling or McCarthy liked their covers? When there's a blatant difference in how these women are shown next to their more traditionally beautiful colleagues, it reinforces the message that they are, in fact, different. Elle, among countless other women's magazines, has continued to marginalize women of color and women that couldn't fit half their body into a sample size by featuring them in an offensive way — or by simply not featuring them at all. When women see someone who looks like them on the cover of a magazine, it's affirming; when that woman is cropped and otherwise rendered differently than others, it's exclusive — sending the message: "We think you'll find this more palatable."

Though the fashion industry's representation of women is significantly lacking in diversity, it hasn't always gotten things wrong. These eight magazine covers give us hope that one day "fashion-forward" will also mean "forward-thinking."

August 1974 marked the first Vogue cover to show a woman of color. Beverly Johnson was also the first black model to appear on an international cover of Elle.

Katiti Kironde became the first black woman on the cover of Glamour in August 1968. The issue sold more than 2 million copies and remains the publication's best selling issue. The then-18-year-old Kironde was an undergraduate at Harvard University and had won the magazine's "Top 10 Best Dressed College Girls" competition.

Chinese model Fei Fei Sun was the first Asian model to appear alone on the cover of Vogue Italia. French Vogue was the first European magazine to feature an Asian model — Du Juan — on its cover (shared with Gemma Ward) in 2005, and the U.S. and UK versions of Vogue have yet to depict an Asian woman on a cover at all.

Now often-imitated, this August 1991 Vanity Fair cover of a pregnant Demi Moore, shot by Annie Leibovitz, was considered groundbreaking at the time because it challenged critics and subscribers who viewed the pregnant female body as "grotesque and obscene."

Vogue Italia, known for being statement-making and the least commercial of the 20-plus editions of Vogue, featured only black models in its July 2008 "All Black" issue. Models Liya Kebede, Sessilee Lopez, Jourdan Dunn, and Naomi Campbell graced the four covers to pay "tribute to beautiful black women in the fashion world and beyond."

The April 2010 French Elle put plus-size model Tara Lynn on its cover and ran a 20-page spread celebrating plus-size women. Lynn was featured again on the cover in February 2012 and also appeared on the November 2013 Elle Spain cover. Vogue Italia featured Lynn along with plus-size models Candice Huffine and Robyn Lawley on its June 2011 cover, and Elle Quebec featured size-14 Justine Legault on its May 2013 cover.

A recent model for how Elle could have gotten their February issue right is W Magazine's six-cover "Best Performances" issue featuring Jennifer Lawrence, Amy Adams, Cate Blanchett, Matthew McConaughey, Oprah, and 12 Years a Slave Oscar-nominee Lupita Nyong'o. The two women of color are given prominence, but all the covers blend together in a way that doesn't call attention to anything other than how fabulous all these women are.