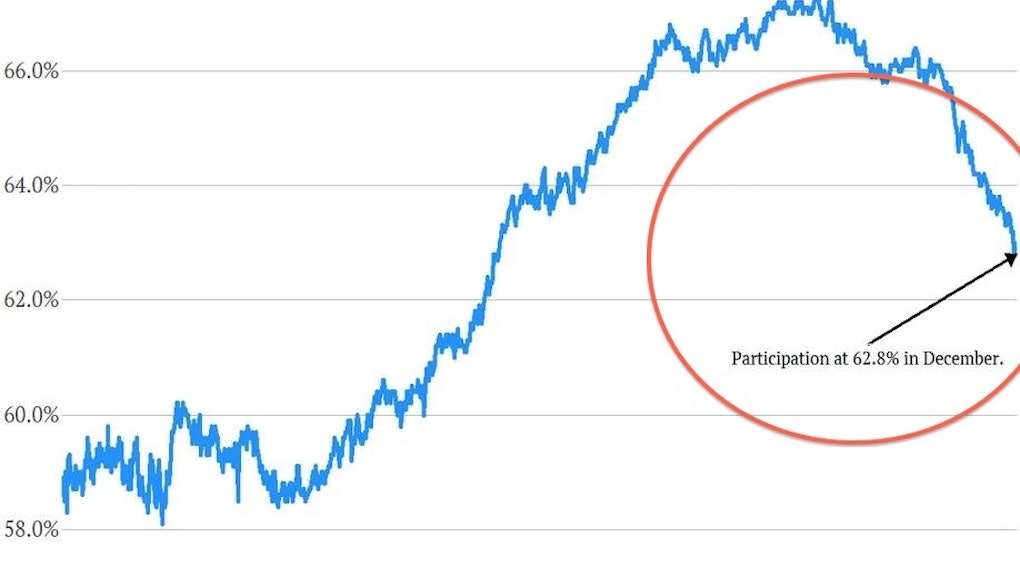 What One Chart Tells Us About the December Jobs Report

The news: According to the Bureau of Labor Statistics, the United States added 74,000 new jobs in the month of December, marking either a reassuring triumph for economic recovery at the end of a successful year, or an unsettling failure to meet market expectations at a critical time. But, hey, why not both?

The deeper meaning: The December jobs report really is both good and bad news.

Thanks to the added positions, the United States’ unemployment rate fell to 6.7% at the end of 2013, marking a 1.2% drop from the year before, and the rate’s lowest point since November 2008, when the financial crisis was just getting started. Overall, 2.2 million private-sector jobs were created in 2013, bolstering record highs in the Dow Jones Industrial Average and S&P 500, and strong gains in the NASDAQ Composite. Great news, right?

Yes. Except for the fact that November’s strong jobs report had economists looking for similar numbers in December. Unfortunately, the 74,000 jobs created represent just over a third of the 196,000 jobs that the economy was expected to produce last month. Worse, whether the weak report is due to frosty weather stymieing construction or to an underperforming health care sector, the fact remains that although the economy is adding jobs, fewer and fewer people are bothering to look for work, as can be seen in the below graph from the Bureau of Labor Statistics, which shows the percent of people 16 and older who participate in the jobs market.

Since unemployment numbers only count individuals who are actively looking for work, and not those browsing the User Submitted section of Imgur while ignoring the jobs listings they have open in another tab, they overlook the people — particularly the young people — who have given up on the jobs market entirely.

But there's hope: While the jobs report is certainly disappointing, it does seem to represent our slow trudging toward normalcy. Put simply, the report was good, but not good enough. Unfortunately, that result doesn’t make for a particularly exciting headline, which is why you end up with ThinkProgress myopically tweeting about 2013’s economic successes, or this article in the Blaze that thinks the growing job market is actually “dying before our eyes.” Apparently, according to news outlets, what our economy really needs to thrive isn’t a living wage, slow but steady jobs growth, or tentative optimism, but the same manic media response to the Bureau of Labor Statistics’ boring economic report, month after month after month.