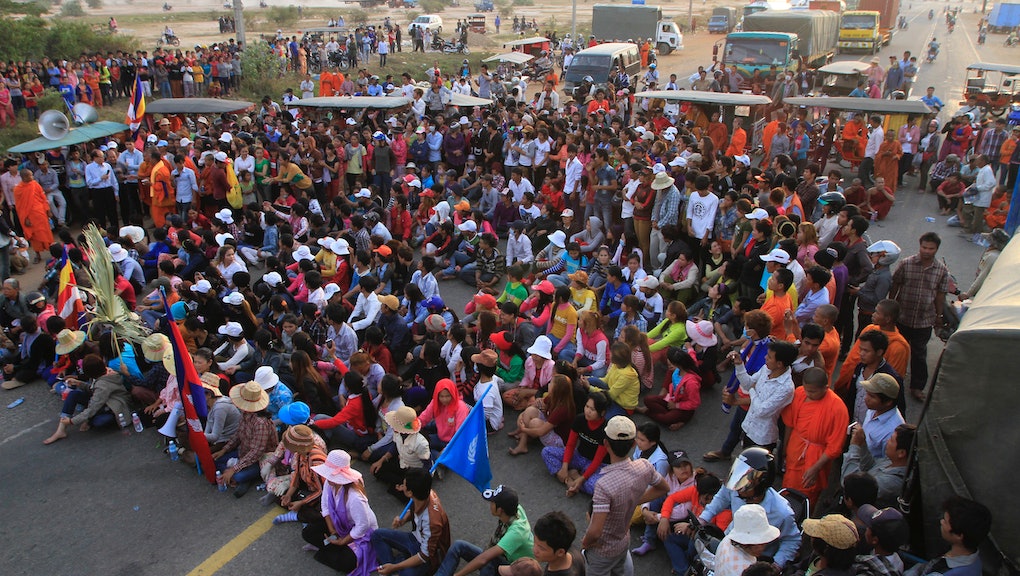 While some parts of the world were well underway with celebrating the new year, garment workers in Cambodia were facing a much harsher reality. On Jan. 3, the Cambodian military opened fire on protesters at Canadia Industrial Park, which houses factories for brands like Adidas, Puma, and H&M. Four civilians were killed and many others were wounded.

These horrific events followed a crackdown on protesters at the Yak Jin factory, which makes clothes for Gap and Walmart, in Phnom Penh's Pursenchey district just the day before. A military special command unit was ordered to suppress demonstrations at Yak Jin. According to a report by the Phnom Penh-based Community Legal Education Center (CLEC), the soldiers were "seen brandishing metal pipes, knives, AK47 rifles, slingshots, and batons." It eventually led to two violent clashes that left 20 people wounded. A total of 10 people were arrested, and the director of the Cambodian League for the Promotion of and Defense of Human Rights (LICADHO) expressed grave concern for the safety of those being held. Protesting monks and workers had been beaten previously at nearby factories. Strikes began in December as workers united in an effort to persuade the government to increase their monthly wage from $80 to $160.

As a response to the largely peaceful protests of the past two weeks, the Cambodian government literally fired back. Since the shooting, the government has moved to ban public assemblies of more than 10 people.

The violent shutdown of peaceful protesters and the new ban on public assemblies represents a disturbing stage of engagement between government and labor. It is clear that the Cambodian government elites are interested in maintaining cheap labor laws in order to attract multinational corporations. Threats to these investment and higher profit margins would be stopped by any means necessary.

Several apparel brands have banded together and issued an open letter to both the Cambodian government and union leaders expressing concern over these events. In a carefully crafted letter signed by H&M, Gap, Inditex (Zara’s parent company), Puma, Adidas, Columbia Sportswear Company, and Levi Strauss & Co., the companies expressed opposition to "all forms of violence," and expressed "great concern" over the "widespread civil unrest and the government's use of deadly force."

Nike and Walt Disney, original supporters of the letter, backed out of signing. Others like Walmart have remained silent.

The corporate response is telling. Through the open letter, companies have been careful not to explicitly criticize the government's violent responses to the largely peaceful protests. Although the companies feel a "great concern" for the recent violence, the companies have yet to use their access to the Cambodian government to guarantee the safety and security of the workers. And silence, of course, demonstrates a tacit support for the government's wretched behavior.

These "playing it safe" tactics hardly lead to meaningful action. To make a true difference, multinational companies should use their investment power as leverage to condemn government violence against its own citizens. Of course, this would mean that the clothing companies might end up having to support higher minimum wages. If the companies already have a hard time speaking out against state violence, it could be nearly impossible for them to actually take a position on increasing the minimum wage.

We will have to see which companies, if any, are willing to set the precedent for change and help improve the labor conditions for their Cambodian workers, some of which have fled the Phnom Penh region, fearing government retaliation.

As consumers outside of the country, we can still play an important role in this process. We can refuse to purchase products made by these companies until they implement policies that oppose state violence, guarantee the security and safety of workers, and support livable wages and union rights.

Boycotting these products can send the right message to multinational apparel companies: we refuse to support inhumane wages and abhorrent government-led violence against its own citizens.

There are approximately 400,000 garment employees working at more than 500 factories all over the country, representing the largest industrial sector of Cambodia. According to the International Labour Organization, these workers account for more than $5 billion in annual exports, which is about 35% of GDP. Yet, the country's hardest workers are some of the least rewarded.

The demand for fair wages is not a new one. Rather, the demand has expanded beyond improving wages and working conditions. It is now also a plea against state violence.