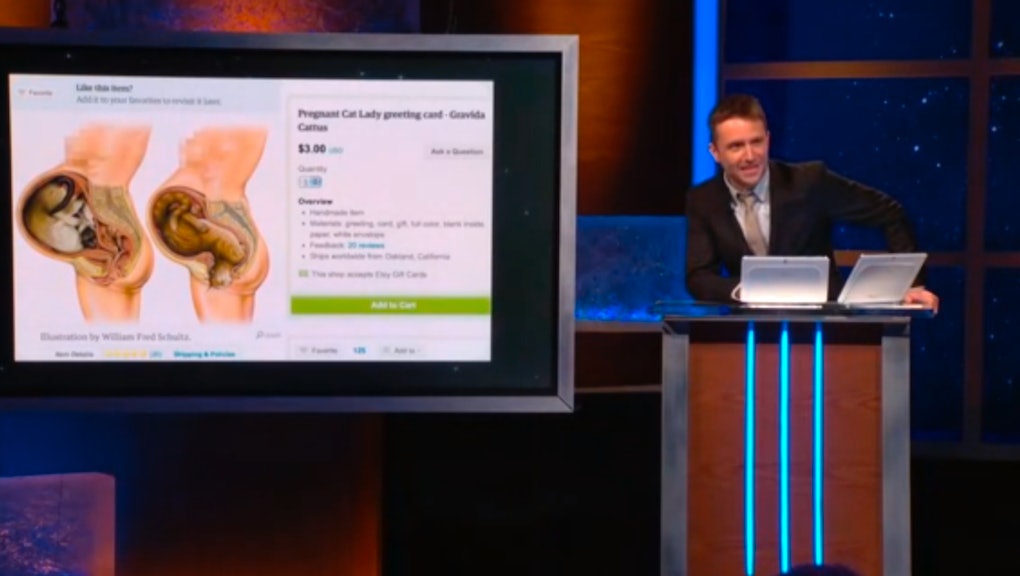 Comedian Chris Hardwick (of Nerdist fame) used — of all things — an illustration of a cat inside a pregnant woman's stomach to make an important point about the censorship of women's bodies on television.

The illustration is part of a "purrfect" greeting card, and the image is allowed to be shown in full save for the blurring of the woman's nipples — which Hardwick points out is ridiculous. He uses the image as a segue to his next point: that the word "pussy" in reference to genitalia is often blipped out. But used to refer to a cat, it's totally fine.

While poking fun at TV's censorship laws, Hardwick points out the hypocrisy of showing a humiliating image of a woman as long as her nipples are obscured. Ten years after Janet Jackson's Super Bowl controversy — in which the FCC fined CBS $550,000 for one second of nipple showing — nipples are still a big deal.

The question of why censors continue to delineate what aspects of the female body are okay and not okay to be shown on air takes us back to 1952, when I Love Lucy refused to use the actual word "pregnant" to refer to Lucy's pregnancy. Instead, the show had to use more benign phrases like "with child," "having a baby," and "expecting."

So why does this matter? With political battlelines continuing to be drawn across women's bodies, it can feel like we have lost control of our own anatomy. These arbitrary regulations of female representation on TV leave us with the same feeling.

Maybe a comedian with a cat will finally make people see the light.