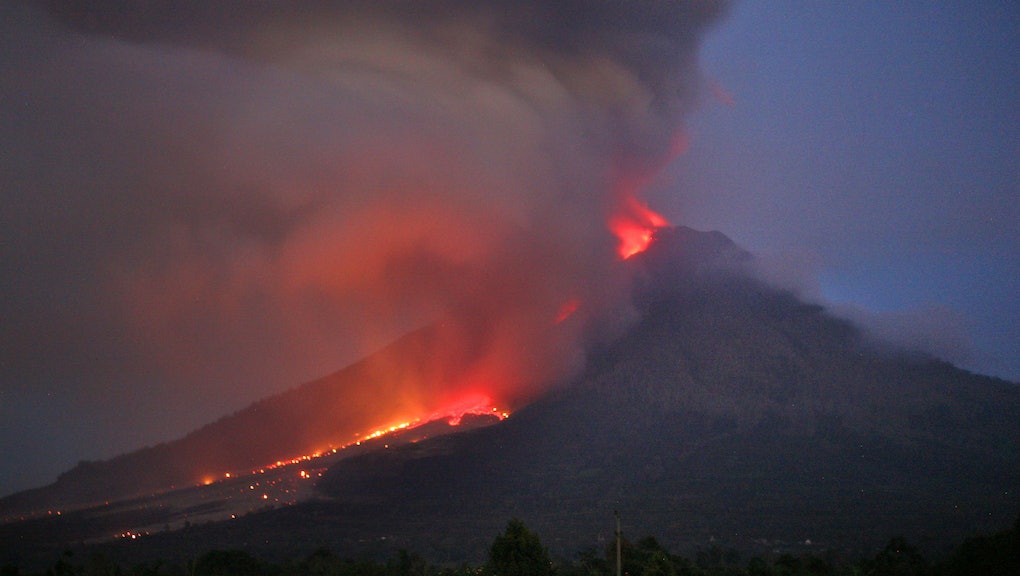 10 Crazy Images Show What Happens When a Massive Volcano Explodes

Indonesia's Mount Sinabung has erupted more than 220 times over the past week and a half, leading to the evacuation of more than 22,000 individuals. While the volcano has been releasing bursts of ash since September, its activity has escalated since the beginning of the year, causing pyroclastic flows, which consist of exceptionally hot gas and rocks, to glide miles down the southeast side of the mountain.

Fortunately, Indonesia's disaster management agency is no stranger to coping with volcanic eruptions. Located on the Pacific's Ring of Fire, the island nation is home to 142 volcanoes. More than 30 of those are located on the large island of Sumatra, where Mount Sinabung lies. Thanks to the agency's evacuations, no direct casualties have been reported from the most recent eruptions, although the disruption to local lives has been significant nonetheless. Interestingly, prior to 2010, Mount Sinabung had not erupted since 1600.

Words alone cannot adequately convey the scale or force of the mountain's instability, or how it has already changed the surrounding landscape. Here are some of the most striking images to come out of the geological event.

2. Buses have evacuated villagers living within four miles of the crater on the mountain's southeast slope.

According to the state emergency agency, "no human activity" should take place within three to four miles of the crater, which it considers an expanding danger zone.

3. Smoke and ash have reduced visibility on roads, and caused evacuees to don face masks.

5. ... and damaged crops planted in the mountain's fertile volcanic soils.

6. 6,300 families have been displaced into 32 evacuation centers, and the evacuation zone may still increase.

7. Unfortunately, a number of pets were left behind in the crisis ...

8. ... though some Good Samaritans have ignored warnings and returned to feed them.

9. Given the continuing ejections, it remains unclear if and when people will be able to return to their homes ...

10. ... or what the landscape will look like when they return.