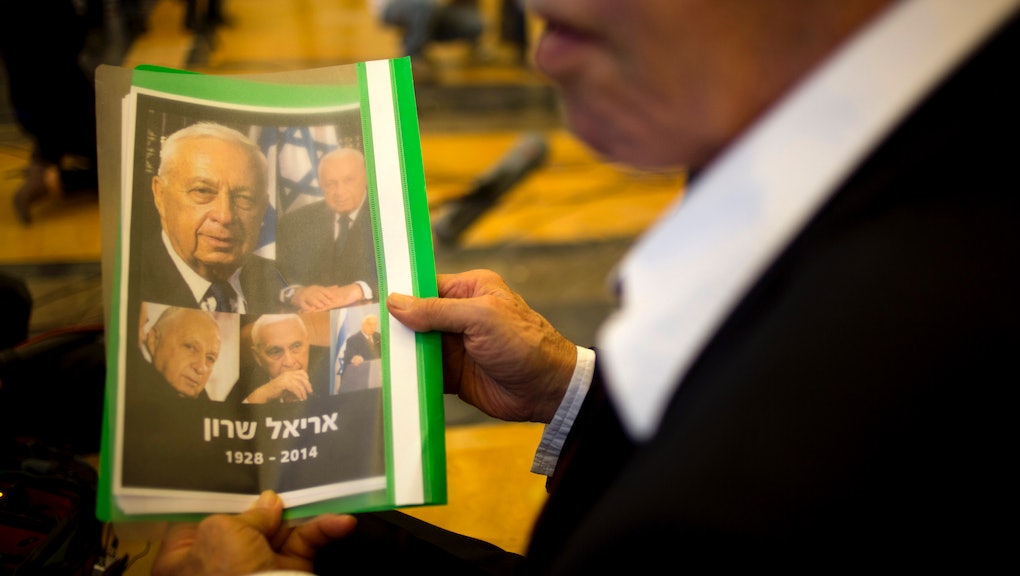 "I am 73 years old. I've seen everything. I've met the kings, the queens, the presidents, I've been around the world. I have one thing that I would like to do: to try to reach peace."

When Ariel Sharon uttered these words in the first year of his tenure as prime minister of Israel, observers of Middle Eastern politics were understandably skeptical of their sincerity. Indeed, it is instructive to compare the prevailing attitude toward Sharon with the general sentiment among Americans toward one of our most controversial presidents, Richard Nixon, after the latter first took office. Both Nixon and Sharon had spent their long careers in public service propounding hard-line hawkish positions on the major foreign policy issues of their time (the Cold War for Nixon, the Arab-Israeli conflict for Sharon) and each one subsequently shocked the world when, instead of pushing their nations' foreign policies to the right, they instead took major political risks in the pursuit of peace.

Similarly, each one had their administrations tragically cut short after only five years in office, albeit for very different reasons (the Watergate scandal for Nixon and a debilitating stroke for Sharon). Unfortunately, while Nixon left office having advanced the cause of world peace by opening up diplomatic relations with China, ending the Vietnam War, and thawing the Cold War through detente, Sharon left the world stage before his statecraft was given the opportunity to bear fruit.

To understand the magnitude of Sharon's metamorphosis, one must recall that he had spent the first quarter-century of his adult life in the Israeli military, participating in all of the major wars of his country's formative years.

Before he became prime minister, Sharon was best known as the notorious minister of defense who oversaw the infamous Sabra and Shatila massacre. Although the precise details of that incident remain hotly debated to this day, Sharon's hawkish reputation can be viscerally understood just by looking at the undisputed facts: Namely that, during the Lebanon War, Sharon had allowed a unit of Phalangists (Lebanese Maronite Christian militias) into the Sabra and Shatila refugee camps, "ignoring the danger of bloodshed and revenge [and] not taking appropriate measures to prevent bloodshed," resulting in the slaughter of between 800 and 3,500 Palestinian civilians. While there was no evidence that Sharon ordered the massacre, few believed that he was unaware of what would happen if the Phalangists were given free rein, a conviction that ultimately resulted in his resignation. From that day forth, he became known to his critics as "the Butcher of Beirut."

Despite occasional stabs at the conciliatory rhetoric of peace, Sharon soon emerged as a proud leader of the Israeli right, from famously seizing the microphone from Prime Minister Yitzhak Shamir to shout "Who's for wiping out terrorism?" to his controversial decision when running for prime minister to visit the Temple Mount (the location of two of Islam's holiest sites, the Dome of the Rock and al-Aqsa Mosque) and declare that Jerusalem would always be controlled by Israel, sparking outrage (and arguably violence) throughout the Arab world. This made it all the more surprising when, after being elected, Sharon endorsed the Road Map for Peace, a plan produced by the United States, European Union, and Russia that called for Israel to unilaterally withdraw from the Gaza Strip and commit to the future recognition of an independent Palestinian state. Soon thereafter, Sharon began to make good on his promise, expelling more than 9,000 Jewish settlers from Gaza and the West Bank, forging a multi-partisan coalition to support his foreign policies... and infuriating the Israeli conservatives who, through the Likud Party, had put him in power in the first place. With more than 80% of the Israeli public supporting Sharon's policies, the right-wingers launched a parliamentary campaign to challenge his leadership; when that failed, Sharon resigned as head of the Likud Party, formed a new centrist party (known as Kadima meaning "Forward"), and prepared for a re-election campaign that most polls anticipated he would easily win against his main challenger, Likud candidate Benjamin Netanyahu.

Then he had a stroke. Reduced to a permanent vegetative state, Sharon was succeeded by Ehud Olmert, who despite managing to stave off Netanyahu in the election was politically crippled from the get-go by widespread knowledge of his corruption. After resigning in disgrace and being replaced by another weak leader, Foreign Minister Tzipi Livni, a second election was held, with Netanyahu managing to win this time around. Unlike Sharon, Netanyahu has not disappointed Israeli conservatives, implementing the hard-line policies against the Palestinians that had been expected from Sharon and pushing Israel to the right in the process. Sharon, meanwhile, has remained under constant medical care for the past eight years, waiting until today to finally shuffle off this mortal coil.

Since this obituary opened with some of the first official words uttered by Sharon when he took office, there is no more fitting way to close it than with the most famous line of Nixon's first inaugural address. One suspects that Sharon would have been pleased to see it applied to him:

"The greatest honor history can bestow is the title of peacemaker."