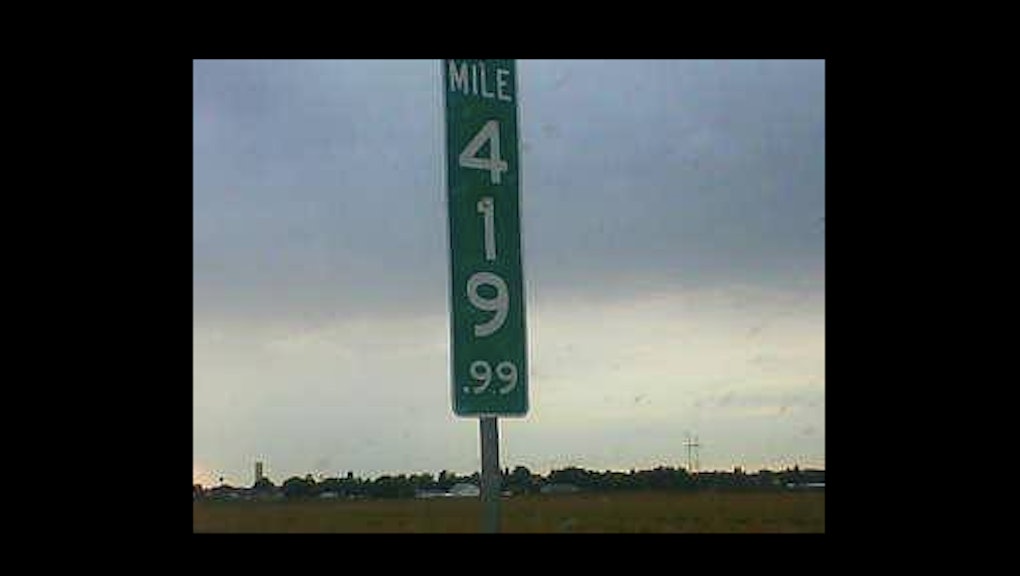 On Friday, Colorado Department of Transportation (CODT) spokeswoman, Amy Ford confirmed to the Denver Post that a sign that first appeared on Reddit on Jan. 5 reading "Mile 419.99" was real. The sign, near Stratton, Col., was the CODT’s playful response to the multiple thefts of the "Mile 420" sign by marijuana enthusiast pranksters.

"Obviously people steal these signs," Ford said. "In the past, if a sign was stolen too much, we wouldn't replace it. This is sort of an innovative way for us to keep the sign there."

"It's a traffic safety thing. It's a helpful thing to have these signs on the road. But people kept ripping them off," she said.

The background: Though the origins of the term "420" are unsurprisingly nebulous, today it is used most frequently to refer to April 20, a worldwide celebration of cannabis culture, and also as a common catchall for lovers of pot.

That the "420" sign has been stolen so many times (and the state's reaction to it) in Colorado, of all places, is awesomely appropriate. On Jan. 1, Colorado became the first state to legalize recreational marijuana usage and in the first five days of legalized sales, sold more than $5 million in pot.

"Mile 420" is not the only sign desired by sticky-fingered Coloradans. Ford said CDOT placed a "Mile 68.5" sign near the summit of Cameron Pass, west of Fort Collins, after continuous pilfering of the "Mile 69" sign.

The CDOT's move suggests more than a playful sense of humor, but also indicates the relaxing of institutional attitudes toward marijuana. And yet, I suspect that CDOT's altering (and the attention it has gotten on the Internet) will only make these traffic signs more susceptible to pilfering.