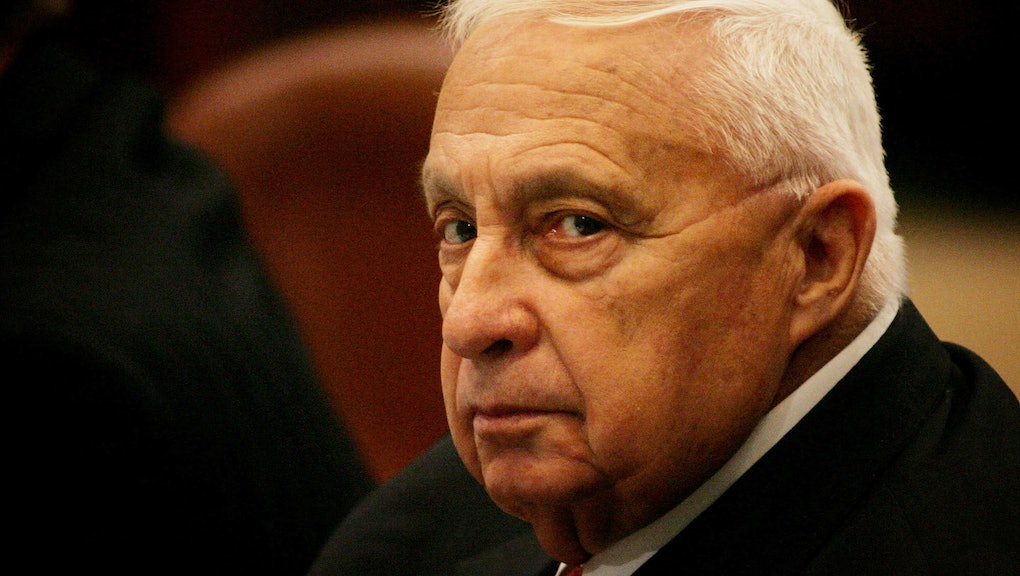 When news of Ariel Sharon's death at the age of 85 arrived on Saturday, the eulogies were ready. The eight years he had lain in a coma had given newspapers plenty of time to package the "trailblazing warrior-statesman," "father of Israel" and "popular swashbuckling figure" — a man of contradictions whose "final mission might well have been peace."

For Palestinians, the memory is quite different. In the West Bank, the news was hardly greeted by dancing in the street: Sharon's legacy is too painful and immediate for much celebration in his death. Nor do the cleaned-up post-mortems come as much of a surprise, arriving, as they do, at the end of a life of impunity.

The events forgotten by some obituaries are not blips in the political landscape, but rather atrocities that, some argue, amount to genocide. When Sharon led a reprisal attack that killed 69 civilians in the village of Qibya in the West Bank, it merely hinted at future disregard for Palestinian life.

In 1982, during an invasion of Lebanon that aimed to oust the Palestinian Liberation Organization, the Israel Defence Forces surrounded the Sabra and Shatila refugee camps in Beirut as their allies in the Phalanges, a Christian Lebanese militia, entered the camp. The massacre that followed is shrouded in secrecy, but the details that have emerged are a chilling glimpse of the carnage that was illuminated by Israeli flares. Estimates as to the number of civilians murdered — men, women and children — range from 800 to 3,000.

Israel launched an enquiry, the Kahan Commission, into Sabra and Shatila. It found Sharon personally responsible for the massacre, "for ignoring the danger of bloodshed and revenge" and "not taking appropriate measures" to stop it.

In Ramallah, graffiti of faceless figures depict the massacre's individual tragedies: the words associated with it are "not forgiven, never forgotten." In the rest of the world, however, the atrocity has slipped from memory more easily.

In Israel, Sharon's responsibility was also sidestepped. Although he resigned as Defense Minister, he remained a member of the cabinet, and in 2001 became Prime Minister of Israel.

The pattern set by Sabra and Shatila continued to be applied in his time as leader of Israel. Operation Defensive Shield saw brutal bombing and repression in the West Bank that killed hundreds of Palestinians, and the Separation Wall hemmed in its inhabitants while settlements continued to rapidly expand, eroding the viability of a future Palestinian state.

The reason these intolerable actions are overlooked can be found in the language of this week's obituaries. Sharon is described as a "fierce defender of a strong Israel" who was "determined to protect and maintain a homeland for the Jews". For supporters, Sharon's bloody-minded fight for Israel vindicates past bloodshed, just as it does the continued colonisation, occupation and suffering of the Palestinian people.

Palestinians know this only too well. "He was everything for Israel," Ismail, who runs a cafe in Ramallah, told me. "From that side, yes, he is a hero, because everything the occupation could have done, he did." When you're the one actually paying the price of Sharon's legacy, overlooking its cruelty is absurd: destroyed homes, lost relatives and uncertain futures are not subplots in the narrative of a complicated and swashbuckling general.

Close proximity to the on-the-ground consequences of Sharon's actions makes another so-called 'puzzle' about Sharon's life rather difficult to take. For many commentators, the withdrawal of 21 settlements from Gaza was an unexpected demonstration that Sharon was a changed man, ready to compromise for peace.

But the interpretation voiced by Dov Weisglass, Sharon's senior adviser will come as no surprise to those who are familiar with the situation in Palestine today.

"The significance of the disengagement plan," he told Haaretz, "is the freezing of the peace process." The seeming concessions of the Gaza pullout left the way clear for continued expansion in the West Bank, courting international support, fracturing Palestinian nationalism and providing enough "formaldehyde," in Weisglass's words, to "prevent the establishment of a Palestinian state."

The results of the move are obvious in both Gaza and the West Bank today, and the withdrawal did not mean freedom. Today, the strip is under siege, the largest of Palestinian lands circumscribed by Israel, and subject to daily violence. Face to face with the success of Weisglass's strategy, Sharon's apparent change of heart does not look mysterious.

"He knew that he couldn't do anything in Gaza so he just left the land there," Ismail continues. "If he did what he did in Jenin in Gaza, there would be hundreds of thousands dead, he wouldn't be able to do this. So he left."

Of course, those tapping out statements of praise or producing obituaries for the "controversial" legacy of Arik the hero are not struggling to make a living in Gaza, or living in the shadow of the wall, or remembering murdered relatives. It is easy for such commentators, in the face of the apparent puzzle and drama of Sharon's career, to overlook one of its most defining features: the ruthless and callous price inflicted on countless innocent people. In towns and cities from Jenin to Gaza to Sabra and Shatila, that will not be so easily forgotten.