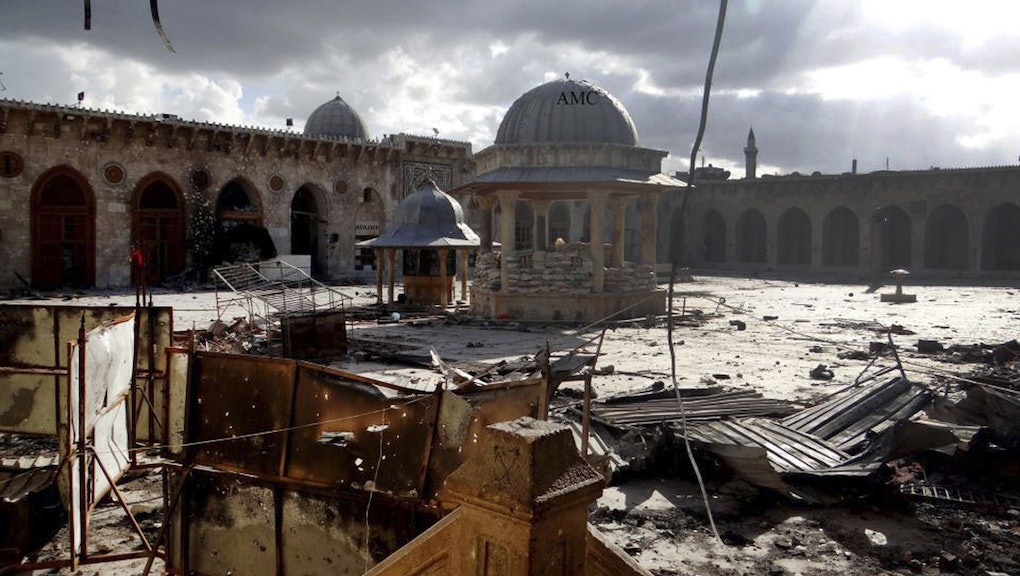 7 Historic Sites Around the World in Danger of Disappearing

Syria has seen more than 100,000 deaths since the start of the conflict, and the world watched in horror as the violence rages on. Amidst the brutality, priceless historic sites have been destroyed, including many UNESCO World Heritage sites. In October, Aleppo's marketplace, Souk al-Madina, was added to the list of casualties as groups of rebel fighters clashed with forces loyal to the Assad regime.

Syria isn't the only place where historic sites are in danger of destruction; there are 44 sites around the world, according to UNESCO.

National treasures can be neglected or damaged for a number of reasons — whether it is poor policymaking, political upheaval or environmental concerns.

Here are seven UNESCO World Heritage sites that are under threat:

Zabid, the capital of Yemen from the 13th-15th century, is known for its outstanding domestic and military architecture. A coastal town characterized by its winding narrow streets, traditional houses and minarets, Zabid played an important role in spreading Islam as students from around the world flocked to the city's Islamic university.

The city, however, has experienced a severe decline in its physical condition due to economic hardship. Since 2007, the General Organisation for the Preservation of Historic Cities in Yemen has received help from the German Technical Assistance, but the city is going to need considerable financial assistance if its severe deterioration is to be reversed.

The historic city of Mtskheta, the former capital of Georgia, contains an impressive number of historical churches and monuments, which is a testament to the medieval ecclesiastical architecture of the Caucasus region. Many of the city's churches date back to the 11th century, but there are several erected as long ago as the 4th century.

However, during the tumultuous transition away from Communism, the country's politicians let the preservation of historical sites fall by the wayside. Some of the stonework and frescoes at the site have deteriorated, and even though some of the works have been renovated, such efforts have failed to preserve much of the city's authenticity.

As one of the world's major trading centers in the 18th and 19th centuries, the maritime marcantile City of Liverpool was instrumental in the growth of the British Empire. It became a major port for the mass movement of slaves and emigrants from northern Europe to America. The city was a game-changer in modern dock technology, transportation systems and port management and set the standard for many other cities.

Following the re-development of major sites and the damaged sustained by the port in World War II, UNESCO has carefully documented and preserved as much of this important city as possible.

Sitting at the crossroads of several ancient trade routes dating as far back as the 2nd millennium B.C., control of Aleppo has changed many times. It was ruled by the Hittites, Assyrians, Arabs, Mongols, Mamelukes and Ottomans. Because of flux, the city is rich with various influences that have over time seamlessly melded to develop a unique, cohesive urban fabric.

In recent years, the city has faced overpopulation and commercialization. Although Aleppo's 13th century Citadel still dominates the city, the new developments and overcrowding have threatened the delicate, ancient cityscape, which requires careful attention to conservation.

5. Cultural Landscape and Archaeological Remains of the Bamiyan Valley, Afghanistan

Nestled inside the high mountains of the Hindu Kush in central Afghanistan, eight separate sites make up the Cultural Landscape and Archaeological Remains of the Bamiyan Valley, which was a major site for the development of the Gandhara school of Buddhist art from the 1st to 13th centuries.

Among Buddhist and Islamic art and cultural tradition were two giant Buddha statues (55 and 38 meters high) carved into the Bamiyan Cliffs. Tragically, these two pieces were destroyed by the Taliban in March 2001, but UNESCO has tried to preserve what's left of the important artistic and religious developments in the region.

Sitting on the southern tip of Florida, Everglades National Park is the largest sub-tropical wilderness reserve in North America. Its complex of wetland habitats features a variety of ecosystems that support an impressive diversity of flora and fauna, as well as birds, reptiles and over 14 threatened species such as the manatee. It protects about 800 species of land and water vertebrates.

Luckily, the Everglades aren't in any immediate danger, but thelongevity of their ecological diversity cannot be risked, which has lead to UNESCO's continued efforts to maintain and preserve the park's spectacular, natural state.

Situated in the remote Pampas, one of the driest deserts on Earth, workers came to the Humberstone and Santa Laura from Chile, Peru and Bolivia and lived in towns where they developed pampinos culture. Thousands of workers lived in the hostile environment for over 60 years from 1880 to mine and process Chile's large deposits of saltpeter that would eventually bring wealth to the country. Because of the close-knit culture of these towns, residents developed a culture with their own rich language, creativity and sense of social justice, which would shape social history.

After the saltpeter supplies diminished, most of the developments were torn down, leaving the remains to fallen into despair from years of neglect and looting. But because of the rich history that was birthed in these saltpeter works, UNESCO added these locations to the danger list for the continued efforts for their conservation.