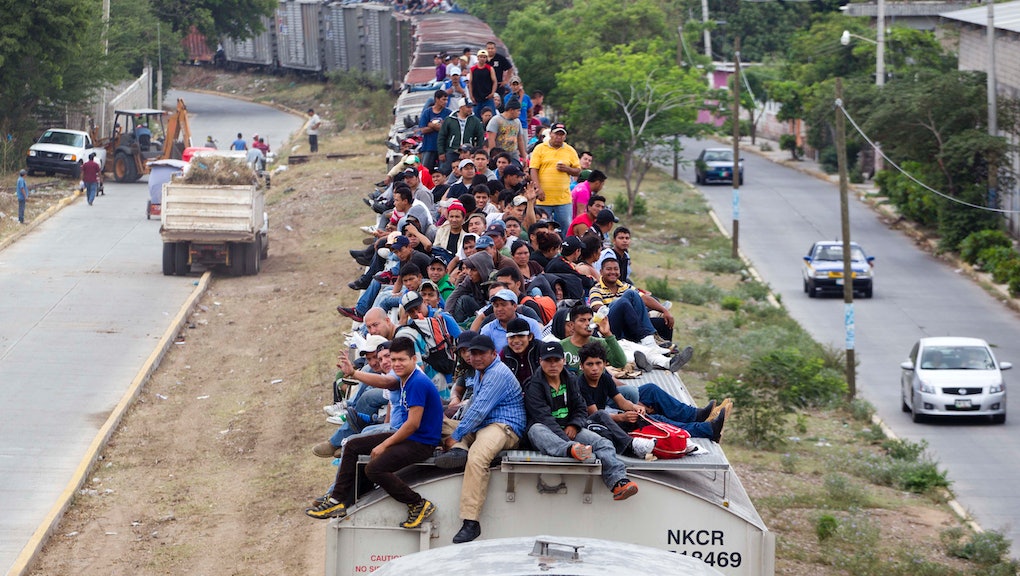 The Brutal Side to Immigration That Congress Should Be Talking About

"They kill or kidnap you," explained Irwin, a 20 year-old Honduran, when describing the harrowing journey for Central Americans seeking to settle in the United States. These migrants are easy prey for Mexico's cartels, who routinely rob, enslave and kill them on their journey north. Since they are undocumented, they have virtually no protection from this brutality.

The House will present its own proposal to overhaul the nation's immigration laws by month's end, resparking the immigration debate in Washington. But while topics like border security and "amnesty" will likely occupy much of the media bandwidth, there is another dimension to immigration that we frequently overlook: what happens to migrants before they finally make it to the United States. But any immigration debate that overlooks how people actually get to this country is incomplete.

This issue is more critical than ever. While immigration from Mexico to the United States is effectively net-zero, there has been a huge influx of Central Americans in recent years. The number of non-Mexicans arrested at the U.S. border doubled between 2011 and 2012 alone. Trying to escape poverty and crime in their home countries, over 150,000 Central Americans now enter Mexico's southern border every year en route to the United States. But many will never make it to their final destination, and their stories are ones of unimaginable violence, exploitation and hardship.

The exact numbers of Central Americans who have died trying to reach the United States through Mexico are difficult to determine, but the estimates are stunning. One organization asserts that nearly 50,000 migrants have died over the past six years, a fifth of whom remain unidentified. Another group put the number even higher – 70,000 "disappeared" between 2007 and 2012.

Many perish due to the extreme conditions of the long trek. Migrants risk exposure and illness, not to mention the dangers of the "La Bestia," also known as "death trains." For Central Americans, the principal method of travel through Mexico is on top of freight trains, and passengers frequently fall off by accident, resulting in death or serious injury. Last year, a derailment killed and maimed scores of the roughly 200 Honduran migrants aboard.

Mexico's cartels are even more brutal. Over just three years, 30,000 to 60,000 migrants have been kidnapped by organized crime in Mexico. They are ransomed to their loved ones and tortured if they do not provide names of relatives or their phone numbers. They are forced to work, traffic drugs or even kill as mercenaries. Should they refuse, they are murdered in front of other migrants as a lesson. Human trafficking has become the third most lucrative crime for Mexican cartels, after drug and arms sales.

Women are especially vulnerable. Some estimate that six out of 10 undocumented women are sexually abused, by both criminals and local authorities, while traveling through Mexico. Expecting to be raped, many take contraceptive injections before embarking on the trip to protect themselves from unwanted pregnancy.

The Mexican government has been criticized for complacency in the face of such egregious abuses. In December, the country's National Human Rights Commission, an independent body, released a scathing report of the official response to a 2010 massacre of 72 undocumented migrants at the hands of Mexico's most violent cartel, the Zetas. An astonishing 99% of Mexico's kidnappings go unreported to the authorities, and in 2011, the federal government's migration agency was accused of covering up for a high-level employee who gave immigration documents to Central American girls in exchange for sexual favors.

As the immigration debate heats up once again, we should recognize that this is not an issue that begins at our borders. A truly comprehensive approach to immigration addresses not only those people already living in this country, but also those in transit, as well as those who have even yet to leave their homes. To fix this problem, the United States must work with its southern neighbors to mitigate the veritable crisis befalling these migrants, as well as to alleviate the conditions in Central America that are forcing them to flee in the first place. This will require our policymakers to recognize the situation in Mexico as the humanitarian emergency that it is, and not through the optic of criminals trying to enter our country illegally.

We are long overdue for an immigration policy that respects human rights, and not just for those north of the Rio Grande.