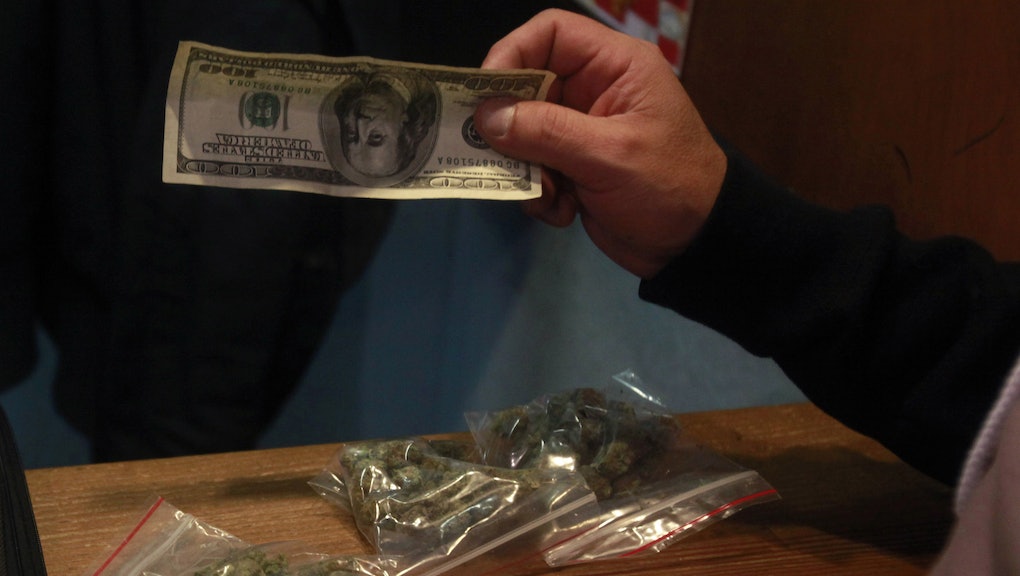 The news: We're just a couple weeks into Colorado's great weed experiment and things are looking good. In fact, they're looking very good — the local state pot shops have sold more than $5 million of legal pot in their first five days of sales.

But there's one big problem: there's nowhere to put all that money.

Because of federal banking legislation that's aimed at preventing money laundering by drug traffickers, it's currently illegal for marijuana businesses in Colorado to legally use the banking system, meaning that the entire industry has to be conducted in cash transactions. What's more, because marijuana is classified as a Schedule I drug (the most dangerous category), banks have been very reluctant to provide traditional services to marijuana businesses out of fear that federal regulators might punish them with large fines for violating prohibitions on money-laundering and other federal laws and regulations. It's a perfectly legal business now, but federal institutions are still too scared to take the risks.

So what do they do? With banks unwilling to offer marijuana businesses accounts, dispensaries aren't able to accept credit cards. This means that all $5 million of those sales were done in cash and that dispensaries have to conduct all their business and operations wholly in cash. Though their businesses are now entirely legitimate, dispensary owners are forced to carrying around sacks of cash — thousands of dollars in $10s and $20s — to pay their expenses.

"Banking is the most urgent issue facing the legal cannabis industry today," said Aaron Smith, executive director of the National Cannabis Industry Association in Washington, D.C. With the possibility that marijuana sales could reach $3 billion this year, Smith said, "So much money floating around outside the banking system is not safe, and it is not in anyone's interest. Federal law needs to be harmonized with state laws."

Think about the criminal potential here: The all-cash nature of dispensaries makes them a natural and ripe target for crime and robbery. With thousands of dollars in cash sitting around, a thief could make out like a bandit and easily take a sizable haul from one of the many locations.

And imagine paying your taxes in cash. Ryan Kunkel co-owns and operates several fully legal medical marijuana dispensaries in northern Seattle, and is forced to physically travel to the Washington State Department of Revenue to pay his taxes with a huge bag of cash — $51,321 to be exact.

To get around these issues, some marijuana businesses have resorted to establishing holding companies with obscure and meaningless names in order to open accounts, but many financial institutions shut these down routinely after discovering the true nature of the accounts and determining there was just too much risk involved.

Something needs to change. Though Colorado has made a major step in legalizing recreational marijuana, the state needs to act fast to make the necessary changes to allow these legitimate businesses to operate like legitimate business. Otherwise the whole system is in serious danger of falling apart.