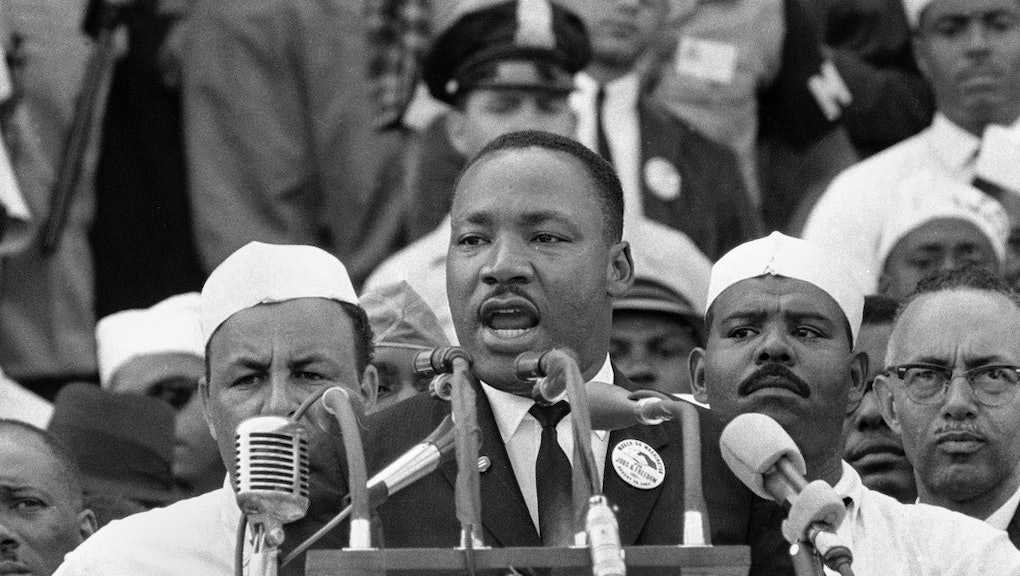 The legacy of black Americans is complex and rich, and filled with moments of failure, triumph, recognition and repudiation. Here are a few of the most poignant moments which, as a part of our shared American culture, should never be forgotten.

1. Martin Luther King, Jr. delivers his "I Have a Dream" speech in Washington

At the March on Washington on Aug. 28, 1963, Martin Luther King, Jr. delivered a speech originally titled "Normalcy Never Again." Towards the end of the speech, he diverged from his planned remarks to deliver what have become his most famous words, about his "dream" for America. King's speech was an impassioned call to action which established him as the face of the Civil Rights Movement in America, and galvanized Americans around a cause which lost its air of futility and became a matter of inevitability.

His speech must never be forgotten because despite all of the progress made towards realizing King's dream, America has still not seen the day in which people are judged foremost by the content of their character.

2. Rosa Parks takes a stand by taking a seat

On Dec. 1, 1955, Rosa Parks was arrested after refusing to give up her seat while riding the bus. Her actions became a symbol of the Civil Rights Movement, and along with the 13-month-long Montgomery Bus Boycotts, led to the end of segregation on public buses.

Parks' decision to remain seated should never be forgotten because it reminds us that there are going to be times when we are faced with injustice, and we will have to make a personal decision to accept it or not.

3. President Barack Obama is inaugurated for the first time

Jan. 20, 2009 marked a watershed moment in American politics when for the first time in history, a black man was sworn in as the president of the United States. While it has become increasingly common to see black people holding lower-tier positions in local government, the same cannot be said on the national level. Take for example the fact that since its initial convening in 1789, the Senate has only had nine black members.

Black Americans have had a long and troubled history when it comes to full suffrage, and in the face of entrenched discrimination and disenfranchisement, the idea of a black president seemed like one that would never amount to more than a dream. Barack Obama defied expectations and proved to be a legitimate candidate capable of connecting with people based on their political concerns, not his skin color.

His inauguration should never be forgotten because it shows us that change should not be feared, but embraced, and that the American dream is alive and well.

On March 7, 1965, during a march from Selma to Montgomery, Alabama, the nation watched via television as demonstrators were callously beaten with nightsticks, fired upon with tear gas and forced to abandon the march by state troopers. Intended to protest Alabama's unjust voting laws as well as the death of activist Jimmie Jackson, the aftermath of the march sparked a chain reaction which culminated in the introduction of the Voting Rights Act.

The Selma march must never be forgotten because it reminds us that the abuse of power to deny the rights of others is categorically unacceptable.

At the age of 22, Jesse Owens secured his spot in history when he won four gold medals at the 1936 Berlin Olympics, swiftly beating his German opponents — and in the process defeating the ideals of Aryan racial supremacy, to the chagrin of Adolf Hitler and the Nazi Party.

Owens allowed his dominant performance in front of the world to speak for itself, and it should never be forgotten because it reminds us that hard work, determination and action lead to indisputable achievement.

The Academy Awards acknowledge the achievements of those who have reached the zenith of their craft in the film industry. Those actors, actresses and filmmakers who have been honored with an Oscar have not only the talent, but the recognition to influence the culture and leave their unique mark on history.

In 1940, 11 years after the creation of the award, Hattie McDaniel became the first black American to win one. The significance of her achievement should not be understated; over 20 years would pass before another black American would win.

McDaniel's victory should never be forgotten because it reminds us not to fear doing what no one else has done before, especially if it is within our ability to do.

7. Track and field stars give black salute at the 1968 Mexico City Olympics

One of the most iconic images of protest was made at the 1968 Summer Olympics in Mexico, when Tommie Smith and John Carlos raised their fists while on the podium during the medal ceremony for the 200m dash. Smith and Carlos kept their fists raised as the American national anthem played, and Australian silver medalist Peter Normanjoined them by wearing a badge in support of universal human rights.

According to Smith, the athletes raised their fists not necessarily to support the Black Power movement, but to express their frustration at the lack of equality and human rights for all, regardless of race. The immediate fallout for the two athletes resulted in the revocation of their right to compete in the games, although all three athletes on the podium faced discrimination upon returning home.

Carlos and Smith's protest should never be forgotten because it stands as a reminder of the double consciousness inherent in American society and the struggle in reconciling our loyalties in the face of injustice.

Michael Jackson was no stranger to the music industry on the night of the Motown 25th anniversary show, but in the company of legends such as Marvin Gaye, Diana Ross and The Temptations, he didn't loom especially large.

Although Jackson had already found critical success as a solo artist with his albums Off the Wall and Thriller, he remained a face in the crowd until his performance of "Billy Jean" at Motown 25. Almost timid but defiant, his masterfully innovative performance announced to the world the he was the king of pop music, and here to stay. The stage presence seen in his later performances was not yet there, but as journalist Jon Pareles succinctly put it, from that moment forward, "There is Michael Jackson, and then there is everybody else."

To simply say that Jackson influenced dance, music, fashion and popular culture worldwide is a gross understatement — and this moment should never be forgotten as the one which properly introduced the world to Jackson.

Joe Louis and Max Schmeling, in two matches widely regarded as among the best in boxing history, became the embodiment of the deeper political and cultural beliefs of their respective nations. When former star Schmeling won against the then-undefeated, up-and-comer Louis, he became the champion of the Nazi cause, affirming German supremacy.

Two years later, when Louis swiftly and overwhelmingly took Schmeling down in their rematch, he became an American hero, upturning the narrative espoused by Nazi Germany. In reality, however, neither man was facing an enemy in the other, but rather in their respective nations. Used publicly to symbolize the conflict between facism and democracy, each man was privately engaged in a conflict against injustice. Schmeling was not actually a supporter of the Nazi regime and its ideals, but toed a fine line between support and opposition in order to sustain his career, while Louis was only a hero as long as he maintained the status quo.

Ultimately, Louis' role in this two-part opera should not be forgotten because in falling down, yet rising to victory again, he became a symbol of strength and perseverance for black Americans.

Maya Angelou's recital of "On the Pulse of Morning" at former President Bill Clinton's first inauguration ceremony marked only the second time in history that a poet was invited to perform in such a capacity, and the first time a black American was selected. Amongst other things, Angelou's poem expressed hope for the future of the nation and for its citizens to leave the past in the past and to approach each other with a clean slate, united as Americans.

For its eloquent and hopeful message, Angelou's performance should never be forgotten.

11. Trayvon Martin is shot to death

On Feb. 26, 2012, George Zimmerman, a neighborhood watch member, pursued 17-year-old Trayvon Martin as he walked along in a Sanford, Fla. neighborhood. Despite receiving instructions not to further involve himself in pursuit, Zimmerman confronted Martin, and in the ensuing altercation, Martin was killed. The image of Martin's body lying coldly on the ground is a disturbing and stark reminder of the underlying prejudicial attitudes that still permeate American society.

Furthermore, in light of Zimmerman's acquittal, Martin's legacy — including this tragic image — stands as a reminder of the ever-present need for judicial reform and should NEVER be forgotten.