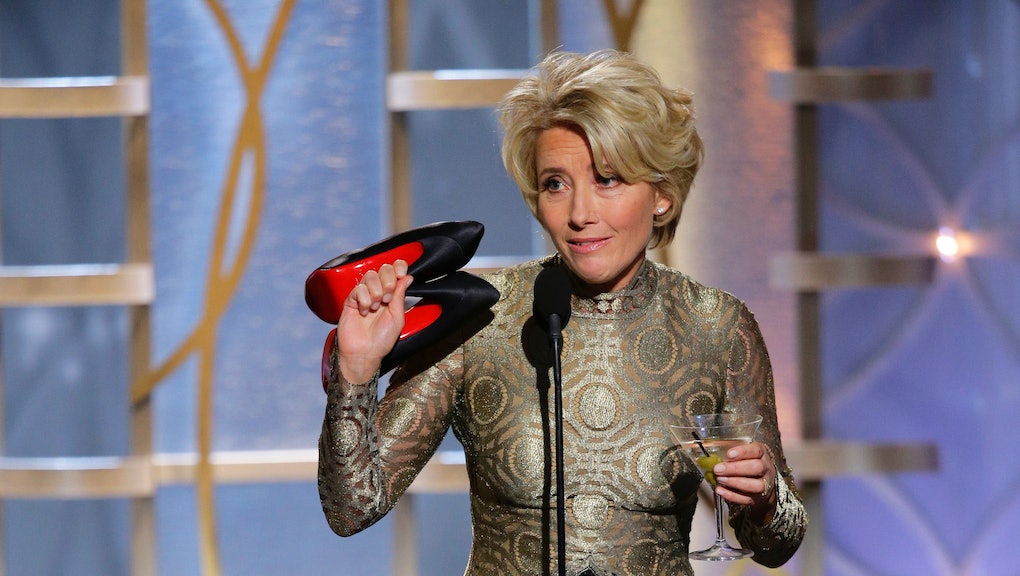 The 9 Most Bizarre Moments From This Year's Golden Globes

The 2014 Golden Globes have come and gone, and in their wake they leave a whole slew of drunken Tinsletown memories. From wins, to losses, to some really poor taste "fun facts," here are nine moments that will live on as the most bizarre of the night.

Jacqueline Bisset really started the night off with a bang. She won for Best Supporting Actress in a TV Series, and then won again for the speech that launched a thousand ships (and confused the censor's enough to have "shit" broadcast live on NBC).

The flub quickly gained online momentum with viewers making "fun facts" of their own:

3. When Paula Patton Wore Her Dress

All Paula Patton was doing at the Golden Globes was presenting, but her dress made it feel like so, so much more.

4. When Puff Daddy Had the Best Time

Puff Daddy (can we still call him that?) was just thrilled to be at the Golden Globes, and just thrilled when his buddy Alex Ebert won a Golden Globe, and basically just thrilled. He delivered every word he said like he was at a barbecue with friends. One such moment was when he cut in before Ebert's acceptance speech to tell the crowd, "He was on a boat with me in St. Barth's!"

Then, there was the moment he tried to hug Bono after giving U2 an award for their song "Ordinary Love" from Mandela: Long Walk to Freedom.

5. When Emma Thompson Won the War On Shoes

Emma Thompson is an Academy Award winning actress, so maybe she was just "acting" drunk at the Golden Globes?

Either way, Thompson came on stage, shoes-off, martini in hand and glowering at the souls of her Louboutins said, "I just want you to know, this red it's my blood."

6. When Diane Keaton Cursed the Length Of a Vine

Woody Allen was (unsurprisingly) not in attendance to receive his lifetime achievement award, so his one-time-muse and lifetime friend Diane Keaton accepted it on his behalf. Keaton gave a lovely speech, but no one at home knows what she said. Whatever she said was laced with such intense profanities that NBC was forced to bleep her out for what amounts to the entire length of a Vine.

7. When Amy Poehler Made Out With Bono

Amy Poehler won (yay!) Best Actress in a Comedy Series and her immediate celebration reaction was a quick Bono make out. Bono obviously had no idea what was coming.

Thanks to Mud, True Detective, The Wolf Of Wall Street, Dallas Buyers Club and now a Golden Globe for Dallas Buyers Club, we are officially witnessing the rise of McConaughey. Obviously none of his new-found serious actor glory has changed a thing about McConaughey the man. His acceptance speech was delivered with the same down home, southern drawl we all know and love.

So I guess we all need to start TiVo-ing Brooklyn Nine-Nine. More than a few people were surprised when the show was initially nominated, and now it has officially won two Golden Globes (Best TV Comedy, and Best Actor for Andy Samberg). The show beat out some pretty stiff competition so it must pretty watch-worthy.

All surprises aside, the look of joy on Seth Meyers' face when Andy Samberg won is worth everything.