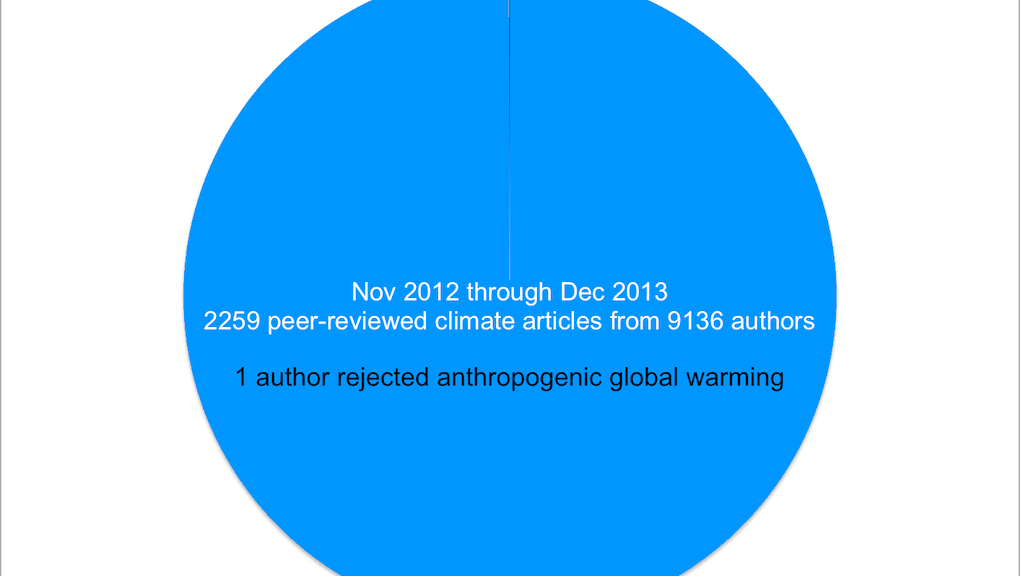 A Study Asked How Many Scientists Don't Believe in Global Warming. Here Are the Results.

The news: We can officially stop wondering if there is a "consensus" on global warming among scientists. A new study by James Lawrence Powell found only a single dissenter out of 9,136 authors who denied that global warming was man-made. Powell looked at more than 2,000 studies published in peer-reviewed journals from November 2012 through December 2013 and came up with just one that didn’t believe in man-made global warming.

That, to me, sounds like a consensus. Powell even gives us a nice visual representation:

So why are we still debating a "consensus" among scientists? As Scientific American points out, a "consensus does not imply truth" necessarily, but it’s "odd how there aren’t even a handful of scientists who deny global warming." And the fact that this consensus among scientists is growing means the evidence is becoming even more irrefutable. A recent study published in the Journal of Climate found with 95% confidence that global warming is man-made. Another scientific paper found minimal impact from the sun on current global warming, agreeing with other estimates that the sun’s effect on rising temperatures is less than 10% that of humans’ effect. So while a consensus alone doesn’t make fact, the idea that it’s growing and the evidence is becoming more and more concrete puts global warming deniers in recoil.

Unfortunately, don’t expect the conversation on global warming to change much. Despite the presence of a near 100% agreement on man-made global warming in scientific journals, it seems that deniers will always have something to cling to, even if it can't be found in a scientific journal. The rest of us will just have to sit here and wait for them to catch up.