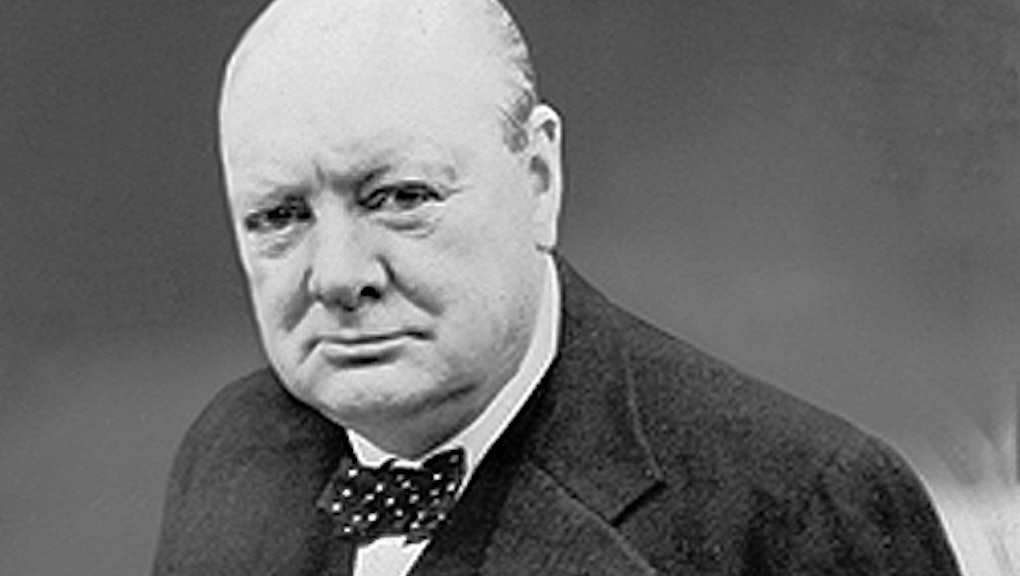 For us millennials, tattoos are no big deal. What was once the stuff of badass rockers, bikers and naval officers is now a kind of self-expression as commonplace as listing favorite quotes on your Facebook profile. But the body art of folks in this list is much more unexpected.

Harold II, the last Anglo-Saxon King of England, was fatally wounded at the infamous Battle of Hastings and later immortalized in the Bayeux Tapestry (pictured). Either because he took an arrow to the eye in battle (ouch!) or because he was badly mutilated after he was killed, his body was identified not by his face, but by some "marks on his body." Some accounts describe his widow, Edith, being called to identify him, which she did by looking for a tattoo over his heart that read "Edith and England." Romantic and practical — lucky Edith.

The seventh president of the United States, Andrew Jackson, had a giant tomahawk tatted on his inner thigh, and nobody really knows why. Maybe it was a symbol of his unending campaign to kill and relocate Native Americans throughout his presidency? Just a guess.

You probably know that James K. Polk spent his presidency gobbling up territory for the U.S., but you may not know that he did it all whilst sporting a Chinese character that ostensibly translated to "eager." Pretty risky ink, if you ask me.

When the 26-year-old John Wilkes Booth shot President Abraham Lincoln, he thought of himself as "God's instrument." When he died, his body was identified in part by a tattoo on his hand of his own initials, perpetuating age-old stereotypes of actors and their supreme self-interest.

The Macy's department store may now be about as mainstream as it gets, but its founder was by some accounts a "total hipster." The inspiration for the store's logo came from R. H. Macy's tattoo of a red star on his forearm, acquired during his adolescent escapades as a sailor.

Thomas Edison, beloved American inventor, holds the record for highest number of patents earned by one person. When Samuel O'Reilly invented the tattoo machine, he used technology developed by Edison for an electric pen. Maybe that was the inspiration for the cryptic tattoo of five dots on Edison's forearm?

The 26th President of the U.S., Teddy Roosevelt, reportedly had his family crest tattooed on his chest — a fittingly valorous image for an avid hunter and a bold politician.

It turns out that Russia's crushing defeat in the Russo-Japanese war wasn't the only lasting impression that the Japanese had on Nicholas II. The last sovereign of imperial Russia apparently came home from a diplomatic trip to Japan in 1891 with a dragon inked on his right arm.

Notorious bank robber Charles Arthur ("Pretty Boy") Floyd's 1933 wanted poster includes a reference to his tattoo, "Nurse in Rose," which was done by tattooing legend Bert Grimm. Grimm said that he had no idea that he had worked on public enemy #1 until a U.S. Marshall came in some time later claiming to have noticed Floyd's ink during an arrest. This Marshall admired the craftsmanship, and ultimately had Grimm give him the same design!

Supremely witty, brilliant and occasionally brazen, Dorothy Parker is easy to fall head over heels for. Still, don't you love her just a little more knowing that she had a star tattooed on her elbow during a night out on the town in New York?

Dystopian author George Orwell did a stint with the Indian Imperial Police in Burma in the 1930s, where he presumably got his tattoos: a blue dot on each knuckle said to protect their wearer.

Winston Churchill's tat was pretty banal; he had an anchor on his forearm. His mother, however, is a different story. Lady Randolph Churchill had an image of a snake wrapping around her wrist, which she slyly covered with a bracelet when desired.

Barry Goldwater, whose Senate record and public image earned him the title "Mr. Conservative," has potentially the most interesting tattoo of them all. The underside of his left hand is adorned with a half circle and a series of dots. The symbol represents a rite of passage in the "Smoki People" organization, a now-extinct group of mostly white professionals whose mission was to preserve various Native American traditions. Problematic cultural appropriation and controversy abound.

Legendary lady rocker Janis Joplin is often credited with bringing tattoos into the mainstream. Her body art was part of her rock'n'roll image, and she inspired both friends and fans to get inked.

Note: One of the items on this list has been removed.