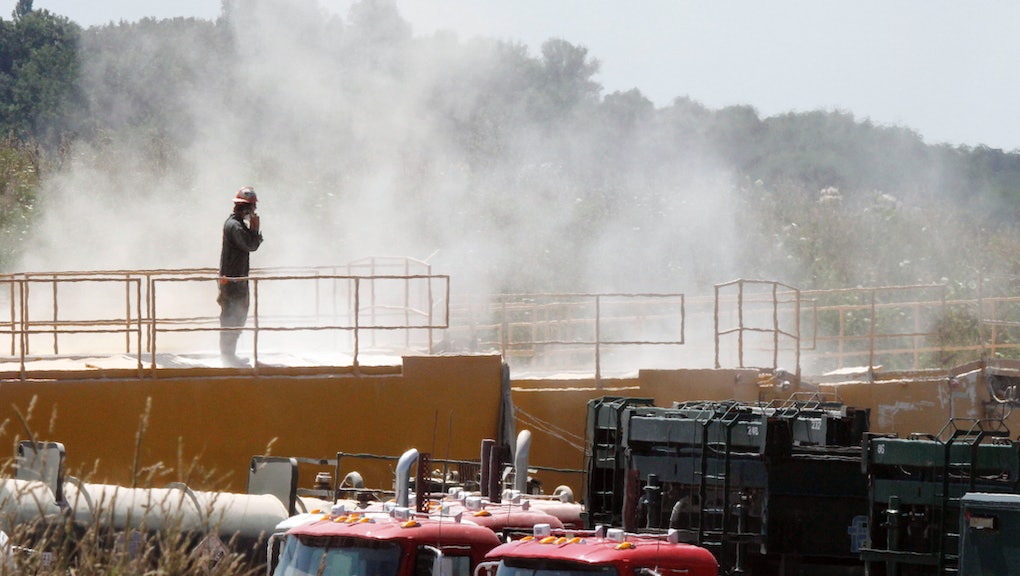 The news: The energy industry has always claimed that fracking, a process for recovering oil locked into shale deposits by injecting a combination of pressurized water and chemicals into the rock, is 100% safe for the environment. But a recently-released report commissioned by Duke University says that some Texas wells exposed to fracking runoff have combustible levels of methane, in direct opposition to industry-commissioned studies that unsurprisingly declared fracking as environmentally friendly.

Those chemicals can leak into local aquifers, and release gases like methane into regional water tables. Here's what that means in practice, as photographed by Associated Press photographer LM Otero at a home near Weatherford, Texas:

The driller, Range Resources Corp., says that it's not responsible for any contamination. In 2010, they were the target of an Enviromental Protection Agency (EPA) lawsuit after the EPA's own tests found "an imminent and substantial endangerment" to local homeowners. But the agency settled and let Range Resources conduct their own testing two years later. When the industry cleared itself of any wrongdoing, the EPA took it at face value.

A later EPA report released last December questioned whether letting Range Resources conduct their own regulatory testing was wise, and suggested that the EPA's fear of a costly lawsuit prevented them from taking action.

"I don't understand why they would let the company that was accused of doing the wrongdoing conduct the tests," said Shelly Perdue, who lives near the two wells in question in Weatherford. "It doesn't make sense."

Why you should care: Fracking is good for the economy and is partially responsible for a huge energy boom in the U.S., including in states like Wyoming and Texas, where shale oil has helped America wean itself off of foreign energy.

But thousands of complaints of contaminated wells and other indicators of pollution have been lodged in 2013, and fracking's assured safety has been called into question.

"When you listen to the personal experiences of actual residents of Pennsylvania and other states where fracking has gone forward, you will hear stories of dead cows, pets, sick children, poisoned water and other serious health and environmental problems. These stories confirm our need for much greater research and evidence-based scientific facts," said Dr. Sheila Bushkin of the Institute for Health and the Environment at University at Albany.

Fracking has been linked to health problems like infertility, cancer, and birth defects, although the evidence is inconclusive at best. But one study found that fracking has big effects on unborn babies, with proximity to fracking sites increasing the risk of low birth weight by more than half to over 9%. It also doubled the risk of a low Apgar score (a summary measure of the health of newborn babies) to more than 5%.

In other words, fracking could have dangerous side effects.

The big takeaway: Fracking is invaluable to the economy, but it's clearly not as environmentally safe as its proponents insist. Much more research is needed to clearly test the risks — and it can't be funded by the frackers themselves.

And for residents of places like upstate New York, where delays in approving fracking operations are the source of much bitter dispute, it might be best to wait and see how dangerous it really is before rushing into the industry. After all, the bedrock isn't going anywhere.